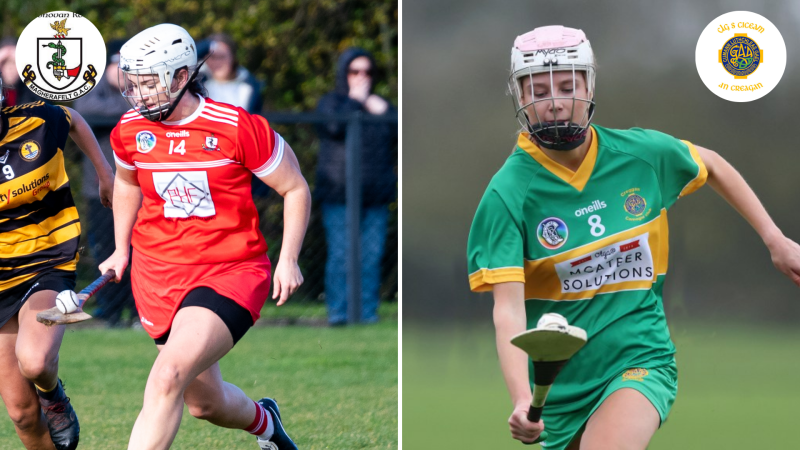 Sometimes provincial finals can throw up the most local of rivalries.

Magherafelt and Creggan lie just 11 miles apart. A short jaunt around the most northerly point of Lough Neagh and a hop across the Bann.

When these sides met in a pre-season friendly at the start of the 2021 season, the possibility of meeting each other in the last two of this competition may well have been in the back of their minds.

They know each other well, with Creggan's proximity to Magherafelt meaning many of their players went to school there.

Rossa manager Barney McGrellis says the two clubs are very familiar with each other.

“There would be a lot of crossover there alright,” he said.

“Bríd [Corrigan]'s boyfriend is actually Conor McCann, the Creggan men's football captain, so there would be a lot of familiarity between the clubs.

“The girls obviously know each other well, but you don't really need an extra edge when you're playing in an Ulster final.” 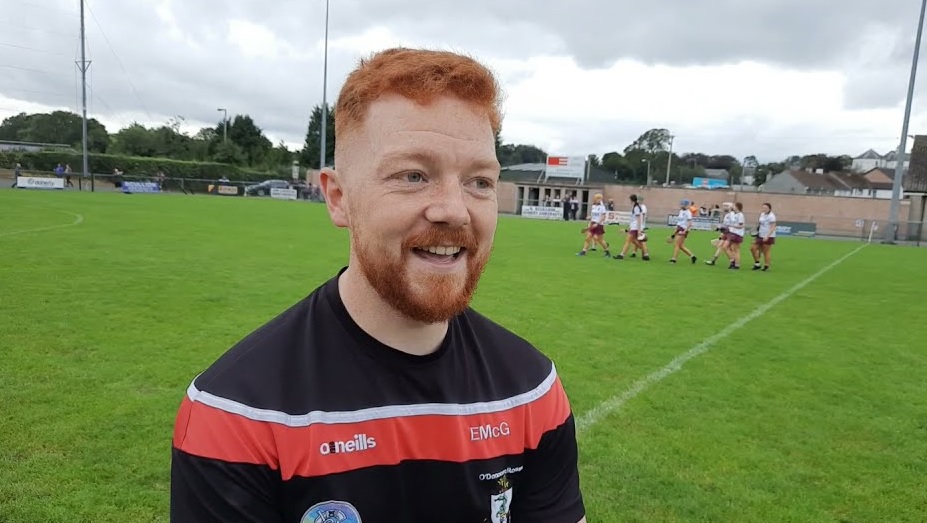 The teams are coming into the final off the back of convincing victories at the semi final stage; Magherafelt dispatching Attical of Down and Creggan defeating Derrynoose of Armagh.

McGrellis says the semi final allowed Magherafelt to put right some of the things they weren't happy with in their quarter final win.

“After the Crosserlough game, the girls weren't happy themselves, we didn't perform,” he said.

“We did a bit more work before the Attical game, we had a better idea of what was coming and the preparation was really good.

“It was about putting the day before right. Against Attical, some of the camogie in spells was fantastic. It was great to see the stuff we've been working on throughout the year coming off.

“Creggan though are a fantastic side. They have a few big names, girls that would have played Antrim minors like Eavanne Martin.

“They don't have a weak player in their team. There were a few girls that came on against Derrynoose and they had a very strong bench. 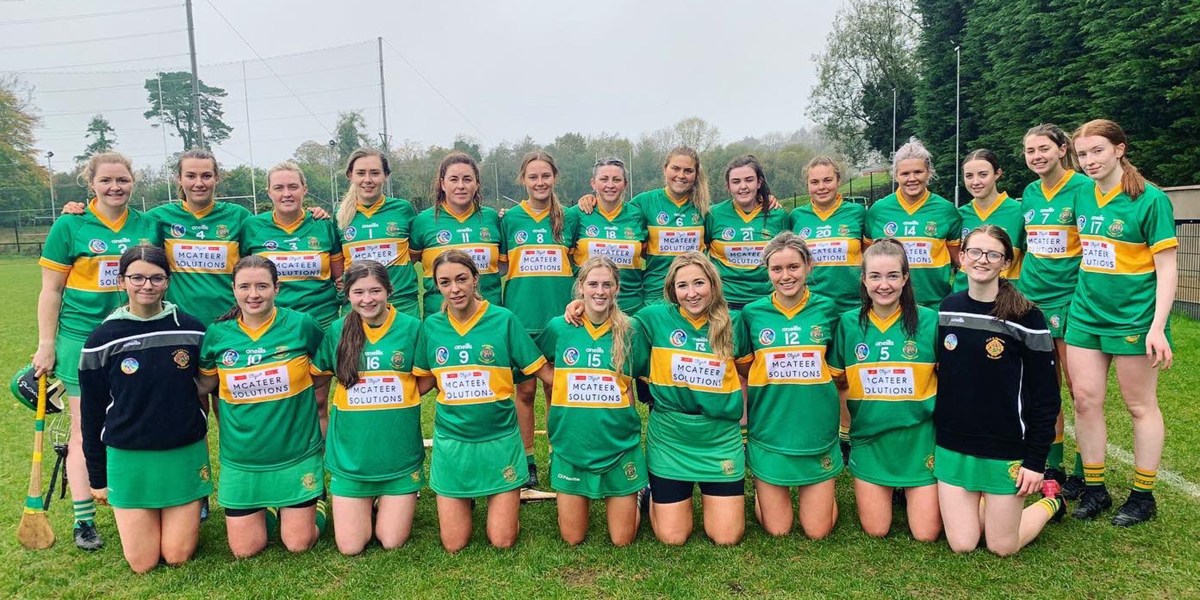 “Their goalkeeper is the best I've seen at junior level. Her handling under a high ball and shot stopping gives a really assured presence.

“Our girls are looking forward to testing ourselves against that, regardless of what way it goes, but it comes down to what happens on the day.”

In the opposite corner, Creggan manager Michael Graffin is also hoping they've done sufficient homework on their opponents.

“We've played them in a few friendlies, and they are a handy side with a few very good players. I said to the girls we can't be taking them lightly,” he said.

“If our homework is done, we should be successful, but it's like any game. If things don't go your way, you have to prepare another solution. 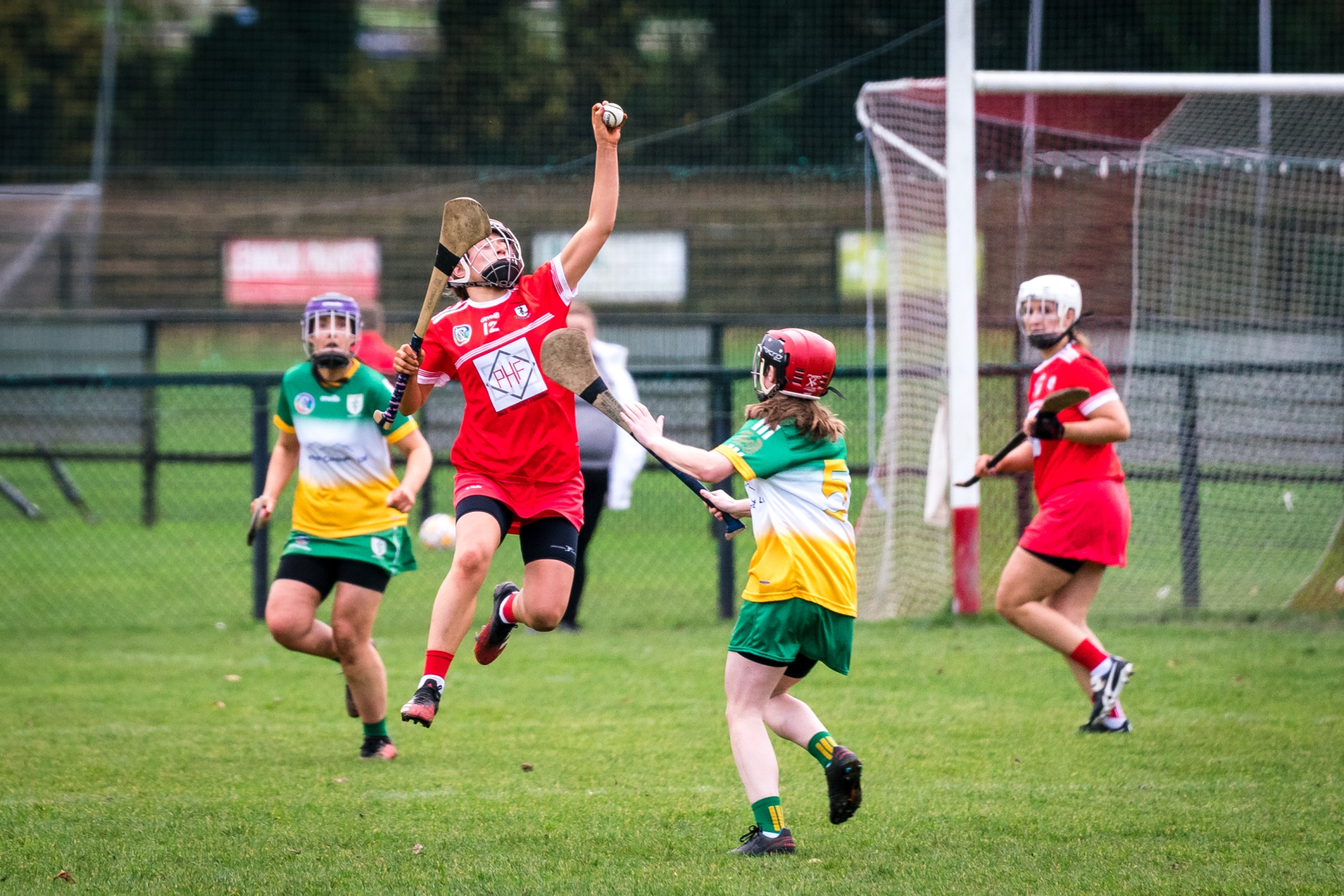 Bríd Corrigan leaps to catch the sliotar in the Ulster semi final. Pic by Catherine Comer.

Sinéad Comer is a very strong player in all aspects. She's hitting points from 60-70 yards out as well as frees, so you have to give her the respect she is due.”

The Saffron side are riding the wave of positivity created by their footballers ending a 67-year wait for a senior football title.

Graffin is hoping the momentum can carry the girls into Saturday's game.

“There's still a good buzz from the footballers last week, so they're on a high from that too. If we can do the deed on Saturday, it'll be the icing on the cake.

“We were training on Tuesday, and they were all still buzzing and chatting about it, so there's a good high there.

“Hopefully this Saturday will be as fruitful for them and hopefully a lot of the footballers can get round and watch, as it gives them a bit of a lift.” 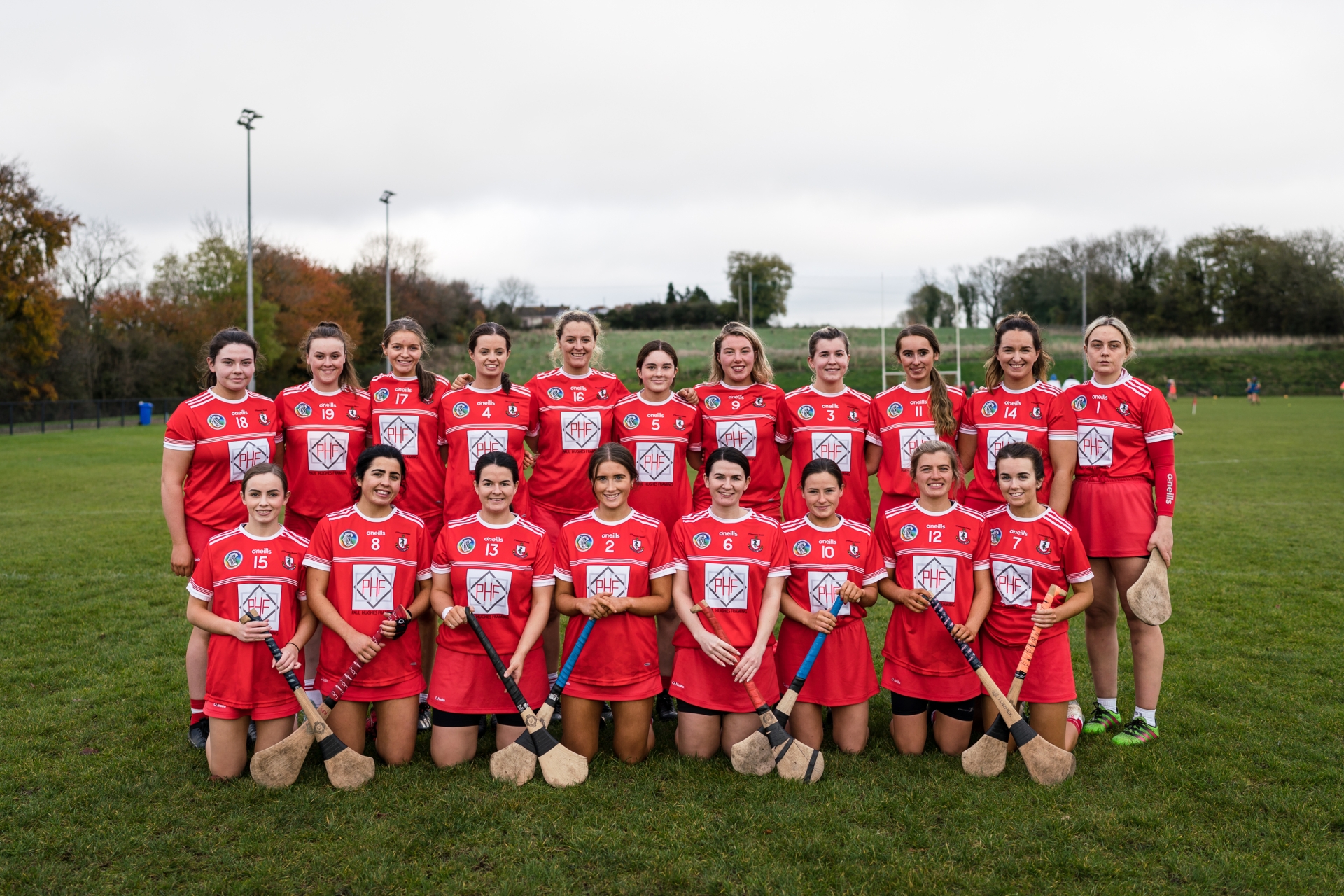 The Magherafelt side who defeated Attical last week.

But Magherafelt are no strangers to that winning feeling. The camógs are yet to lose a competitive match in 2021, while their dual players have experienced defeat just once this year in the football.

They began training for the 2020 season on November 22 2019 and now, almost two years on, they will be hoping to bring that season to a close with the biggest prize of all.

Many in the Magherafelt side are hoping to leave a legacy for the next generation of camógs to pass through Rossa park.

“The girls have talked about inspiring the next generation. The club has been going 84 years and you can see the links right through the generations,” said Barney McGrellis.

“They've spoken about grannies playing, uncles managing, that kind of thing. It's been visible for the younger girls coming through as well.

“I don't think Saturday will define our season, but it's a huge achievement to get here, and we're excited to get out and put our best foot forward.” 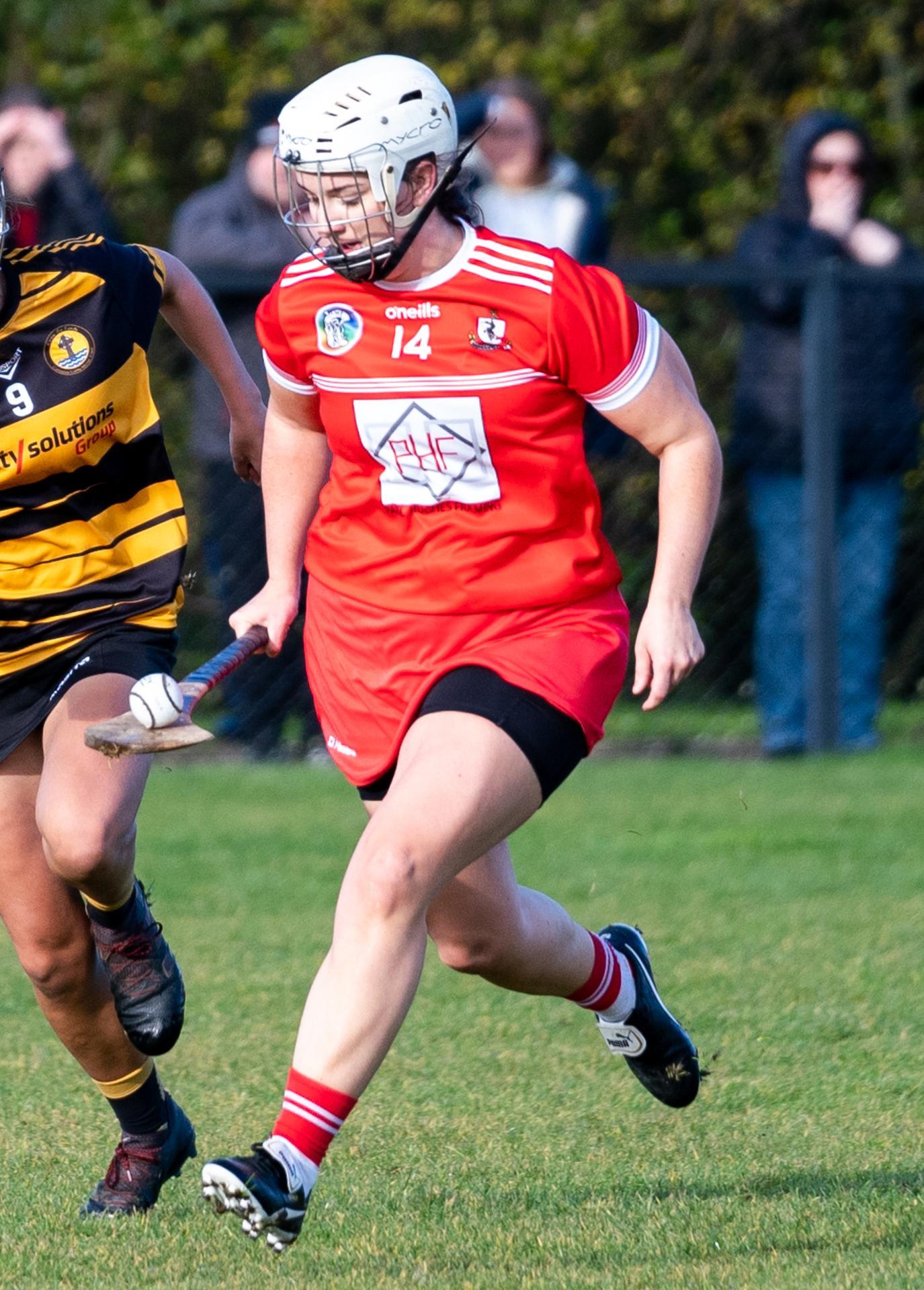 The full forward hit 2-10 in the semi final and is equally comfortable taking long range points from play as she is striking a dead ball.

She has a tendency to roam, and will need watched closely by the Creggan rearguard on Saturday afternoon. 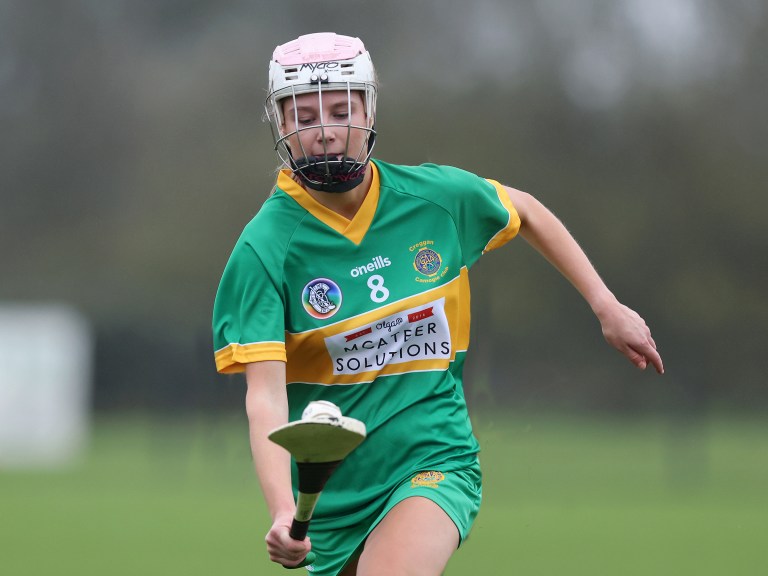 A member of the Antrim team who won the minor B championship this year, and has capped the season with a series of fine performances in this competition.

She notched 1-11 in the quarter final against Carrickmore and further 1-12 in the semi final win over Derrynoose. The midfield battle between her and Orla McEvoy will be a crucial one.

Clubs across Ireland will join in the initiative on Friday.

Rachel McIntyre and partner Aaron lost their baby in June 2016. Rachel speaks to Liam Tunney about how throwing herself into restarting Drum's camogie team helped her cope with her grief, and speaks about her campaign to light up Ireland's GAA clubs for Baby Loss Awareness Week.