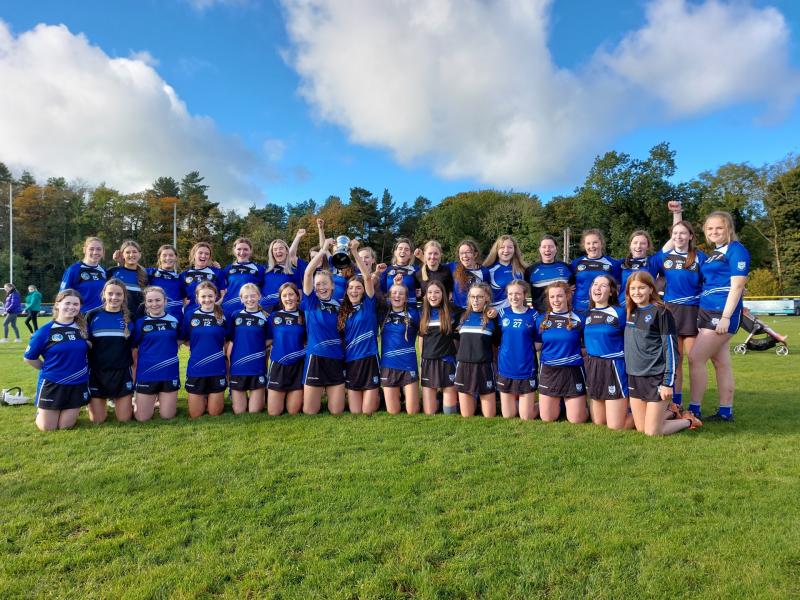 The victorious St Patrick's College team raise Corn Eimhear aloft as the school took home the title for the first time since 2009.

With just four minutes remaining, Anna McKillop's 45 had left St Louis leading by four points, and the Ballymena side were in pole position to claim their first ever title.

A brace of goals from Maria Gately and an Enya Neeson major had seen the Antrim girls overhaul a half-time deficit to outscore their opponents by 1-5 to 0-1 at that point.

However, St Pat's joint captain Carla Collins stepped up, and with 1-6 already to her name, sent a 45 straight to the St Louis net.

Cáit Conway levelled matters just seconds later as St Louis crumbled under the pressure, and it was left to Collins herself to sweep over the winner in stoppage time to spark delirium.

They had started well too, with Collins opening the scoring from a free in the first minute, before Sinéad Mellon dug the sliotar from a tuck and split the posts to double the lead on 3 minutes.

The tricky Slaughtneil corner forward then turned provider immediately, cleverly flicking the ball into the run of Collins who waltzed through a shell-shocked St Louis defence to open a three-point gap.

Loughgiel's Anna McKillop notched the Saffron side's first score in the 8th minute, breaking away from her marker and swinging over, only for Collins to again respond for St Pat's.

After their shaky start, St Louis then seemed to get a grip on the game. A further McKillop point rewarded a period of hard graft, before they edged ahead with the game's first goal in the 12th minute.

Ciara O'Boyle's long range ball dropped neatly into the path of Maria Gately on the edge of the square, and the Creggan girl poked it past Rosheen Doherty to leave St Louis leading by 1-2 to 0-4. 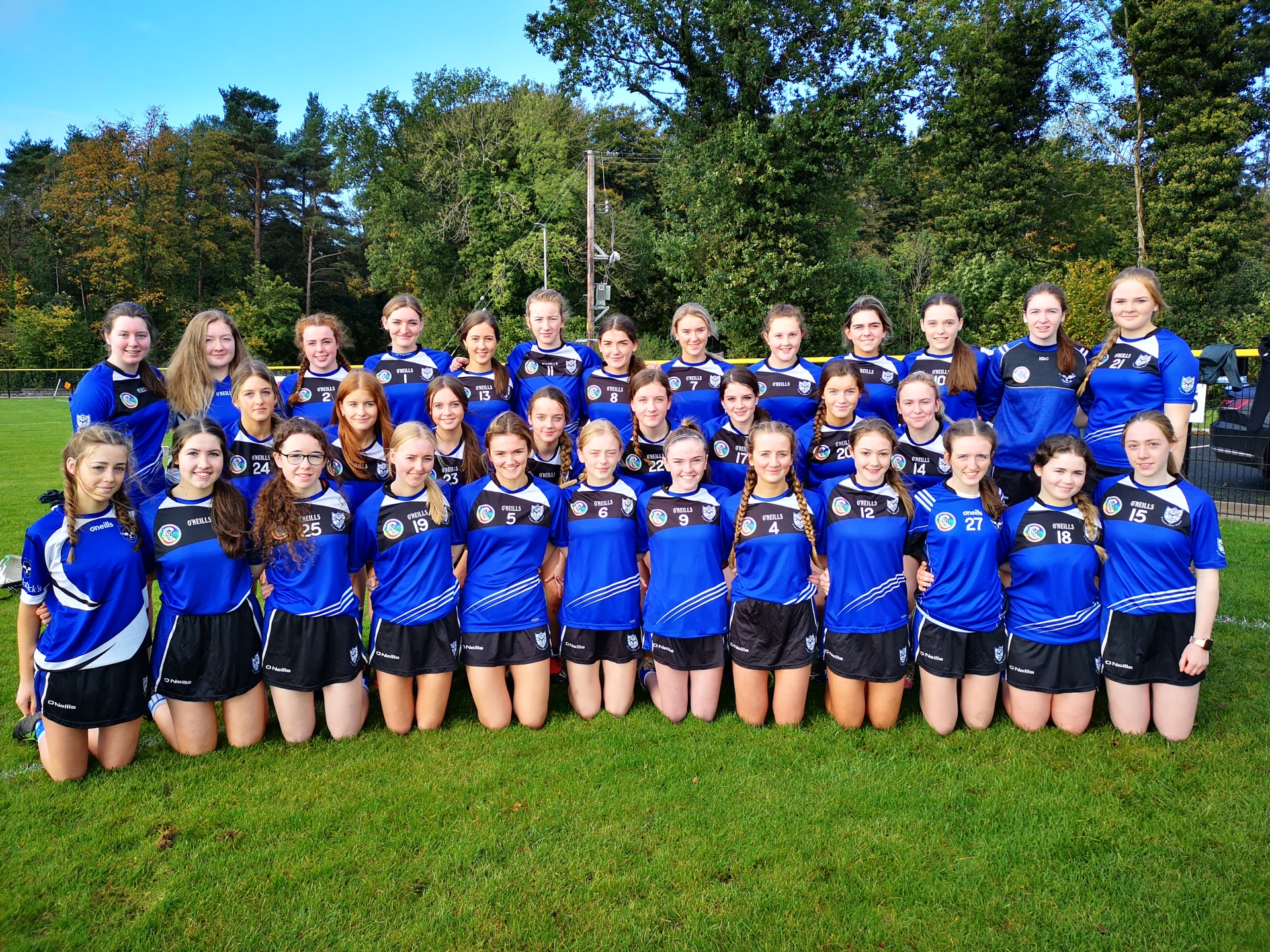 The St Pat's team pictured before the game in Portglenone.

Another Collins free restored parity on 16 minutes, to see the sides enter the first half water break level, and the game took a while to get going again on the restart.

A foul on Katie Marie Griffin allowed Carla Collins to bring her tally to five points for the afternoon in the 22nd minute, but the lead was short-lived as the Antrim side struck again for goal.

Another high raking ball fell agonisingly between defence and goalkeeper, and Enya Neeson stole a march on her marker to bat home first time as St Louis retook the lead.

Collins cut the deficit to one on 25 minutes, before hitting St Pat's first goal just two minutes later, her long range free dropping to the net despite the best efforts of the defenders on the line.

Órlaith Hull popped over a 29th minute free to leave the Derry girls three to the good at referee Sean McGuigan's half time whistle.

The St Louis management enquired of their girls if they wanted it, and they responded in the affirmative early in the second half.

Rasharkin's Ciara O'Boyle provided the finish to a neat move involving Enya Neeson and Alicia Boyd to cut the gap to two on 32 minutes, before an Anna McKillop free left the minimum between the teams.

Maria Gately then spurned an opportunity to wrestle the lead back, her shot richocheting back off the crossbar, and the scare seemed to waken St Pat's, as Collins restored the two-point lead with a free.

St Louis hit back through McKillop, and fired a warning shot across the Maghera bow when Enya Neeson's shot flashed just wide, but St Pat's rallied to fashion a goal chance of their own. 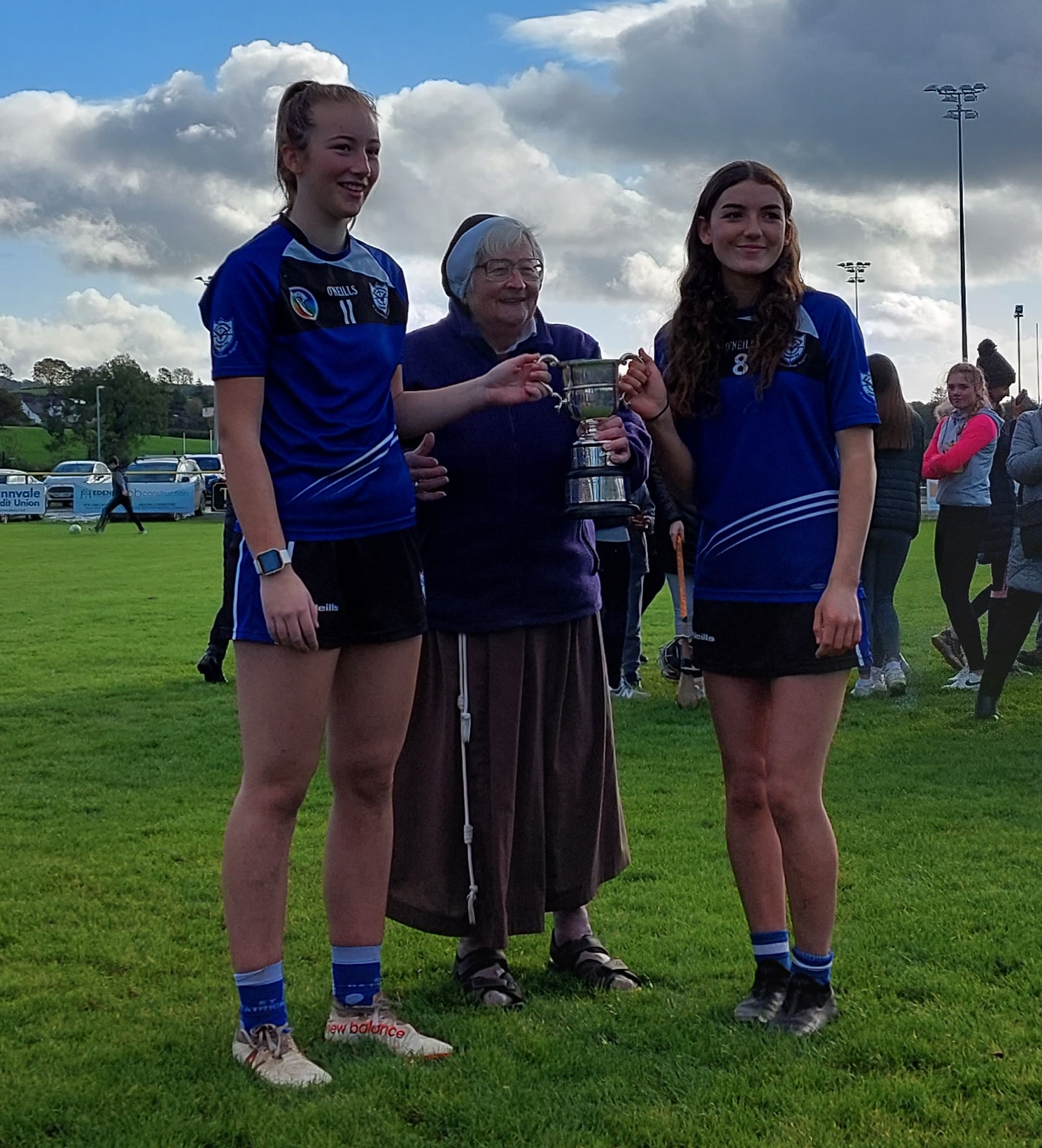 Joint captains Carla Collins and Órlaith Hull are presented with the trophy after the match.

Goalkeeper Eimear McGivern produced a stunning double save to deny Carla Collins not once, but twice St Pat's entered the water break still one ahead at 1-9 to 2-5.

The Derry girls' sluggish second half was punished on the restart though, as Maria Gately raced clear in the 51st minute to rattle the net and send St Louis into the lead.

Anna McKillop tacked on another score to stretch the lead to three points, before St Pat's goalkeeper produced the save that arguably sparked the comeback.

Gately broke through, leaving the defence in her wake, but her point blank shot was bravely turned away by Rosheen Doherty and scrambled out for a 45.

McKillop fired it over for what looked like the insurance point, but Carla Collins sparked a dramatic finale, sending her low 45 straight to the St Louis net to squeals of delight from the bench.

Cáit Conway followed up to level matters almost immediately, and Collins' administered the final heartbreak for St Louis by racing clear on the left and arrowing a finish over the bar.

Agony for St Louis, whose wait for the title goes on, but ecstacy for St Pat's who end a 12-year wait to get their hands on Corn Eimhear and a chance to represent the province in the All-Ireland.

PLAYER OF THE MATCH

Carla Collins - With a total haul of 2-8, including the match-winning point, you can't look much further than the St Pat's centre forward. Took on the free-taking responsibility and, as joint captain, was the driving force behind her side's victory. Her late salvo of 1-1 in the game's dying minutes, with the result and the trophy slipping away, sealed a fine individual performance.

SCORE OF THE MATCH

Ciara O'Boyle point - St Louis started the second half with a spring in their step, and a cris-crossing move with neat stick passes from Enya Neeson and Alicia Boyd ended with Ciara O'Boyle, who fired over a long distance point to finish the move, which roused her side into action and a second half that came agonisingly close to the school's first ever title.

Rosheen Doherty save - The dangerous Maria Gately looked set to complete her hattrick as she bore down on Doherty's goal in the 56th minute, but the Bellaghy shot-stopper kept the effort out, and just four minutes and 1-2 later, St Patrick's College were champions.