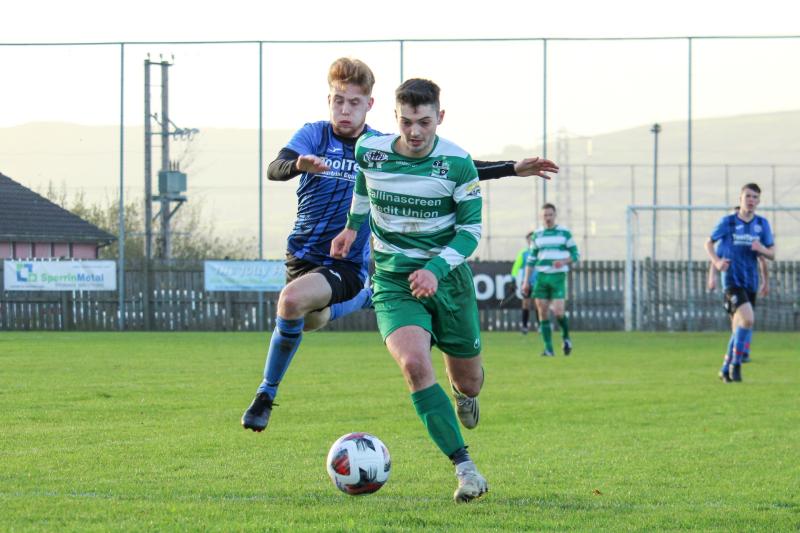 Action from a previous league game against Heights.

Draperstown Celtic put Tuesday nights disappointment behind them to battle back and earn a point against top of the table Garvagh.

With a few disruptions to the squad, manager Glass was forced into a few changes which seen Ryan Scullion return between the sticks, the McGlade brothers on both flanks which allowed McGrogan to play centrally alongside McGovern.

The game started lively with both sides comfortable in possession but failing to capitalise in the final third of the pitch.

DC did break the deadlock when some fantastic play down the right hand side from Irwin, D. McGlade and McGuigan saw D.McGlade square a ball across the Garvagh goalmouth for his older brother Niall to confidently slot home.

From there, the visitors should’ve been able to push on however the home side proved why their at the top of the table in the space of 10 minutes.

Dangerman Dempsey found the back of the net, the first from close range and the second a tidy finish from just inside the box.

After a dangerous Higgins corner and goalmouth scramble, Irwin was very unlucky to see his improvised flick toward goal go narrowly wide, but having largely controlled the opening 30 minutes yet see his side concede two very avoidable goals, Glass cut a frustrated figure on the sideline.

The half finished 2-1 to the home side.

After a few strong words at half time, the visitors took to the pitch with the aim of getting themselves back into the game.

However it was the home side who started the half brighter and but for some last ditch defending could’ve widened their lead.

On the hour mark, DC made a change that seen O’Kane enter the game and a few positional changes that aimed to get the likes of McGuigan and McGrogan on the ball.

It was from the hard work from O’Kane that got DC their equaliser.

Putting the Garvagh central midfielders under pressure, O’Kane managed to deflect the ball into McGoverns path who took on the home defence, ignored the support arriving to his right and at the second time of asking slotted the ball into the corner of the net giving the keeper no chance.

At 2-2, the game was finely poised with both sides making attacking substitutions looking to secure all 3 points.

As the game progressed, it was the visitors who had the best opportunities to grab the victory with McGovern inches wide with a header from McGlade’s super delivery.

Moments later, substitute Kelly was played through on goal but his effort outside of his right foot travelled just past the far post.

On the break, Garvagh too had chances but Scullion was assured when called into action and had plenty of protection in front of him with the defence fantastically led by Irwin.

The game finished 2-2 and whilst DC probably feel they did enough to win the game, it could turn out to be a valuable point gained come the end of the season.