St Mary's faced into a strong wind during the first half. 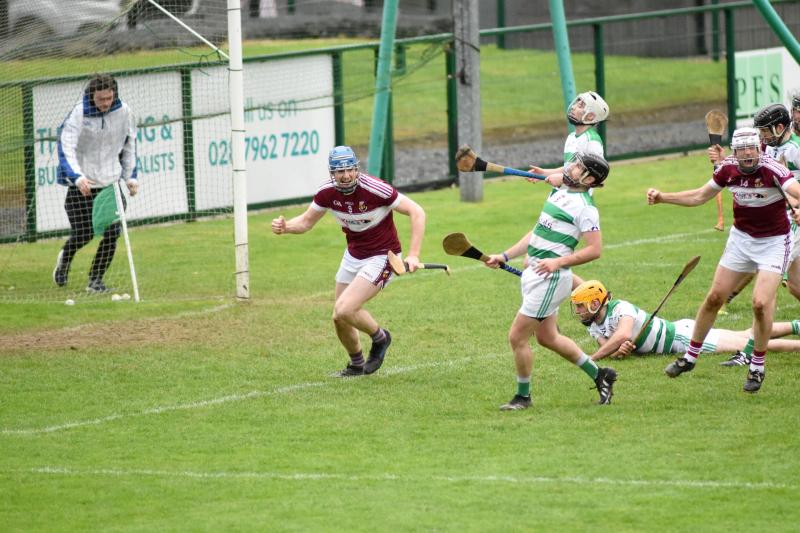 Brian Óg McGilligan reels away from goal having found the net ahead of his first cousin Patrick Turner to cinch the win for Banagher on Saturday. Pic by Mary K Burke

Callum O'Kane turned and roared at the crowd after his 58th minute point. The Banagher crowd roared back. They knew.

Minutes earlier, Brian Óg McGilligan's goal had given St Mary's the lead for the first time in the game. Swatragh had hit back, but O'Kane's long-range effort felt like the tipping point.

The raging Owenbeg wind ensured this game's story would be told in two chapters, and things had started well for last year's champions.

By the 12th minute, Swatragh were five up, with five different scorers, and with the wind at their backs, were rampant.

They led 0-7 to 0-1 at the first half water break, but eased off in the second quarter as Banagher got to grips with the game.

That resolution laid the foundation for victory. By half-time, a six-point gap looked liked a dangerous lead for Davitt's to hold.

In the end, Banagher hit four points against the wind to Swatragh's two, and their 52nd minute goal saw them take the lead and break Swatragh's defiance.

Davitt's bounded out of the traps and had two points on the board within a minute from Martin Quinn and Declan Quinn, before Fintan McGurk hit their third in the 5th minute. 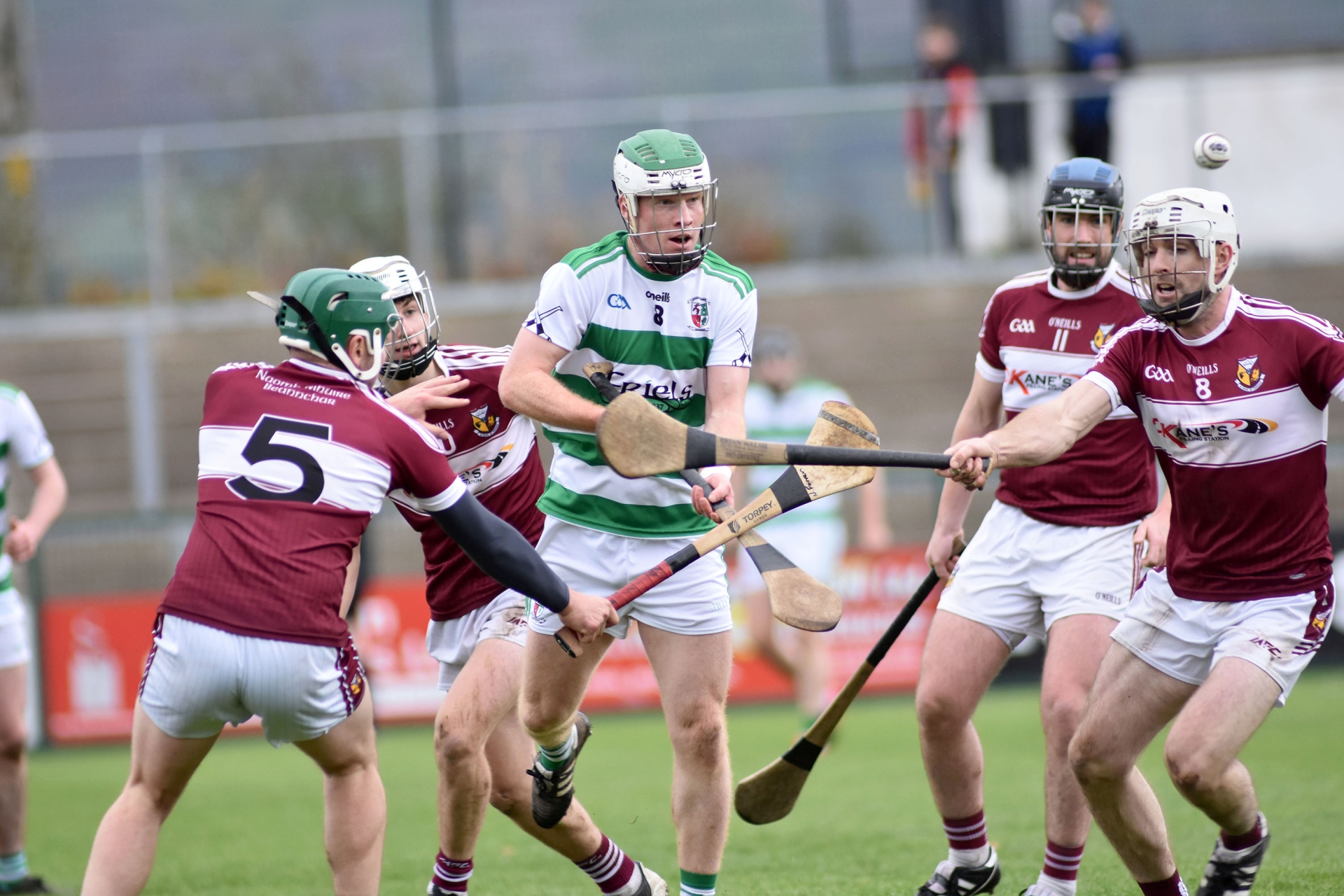 Tiarnan Walsh manages to get the ball away despite being surrounded. Pic by Mary K Burke

Sean Francis Quinn, whose energy was symbolic of Swatragh's urgency, then knocked over his first from distance to leave them four ahead after 7 minutes.

Further efforts from the south Derry side fell to the left and right of the posts, as a shell-shocked Banagher struggled to come to terms with the wind-assisted bombardment.

Swatragh continued undeterred though, and points from Michael McCormack and Declan Quinn (free) saw them lead by 0-7 to 0-1 at the first half water break.

On the restart, Banagher appeared more composed, beginning to turn the Swatragh attacks, and the greater stability began to reap rewards.

A Liam Eoin Campbell free closed the gap to five, before Brian Óg McGilligan wobbled Conor O'Kane's hurl with a half volley from 20 yards. 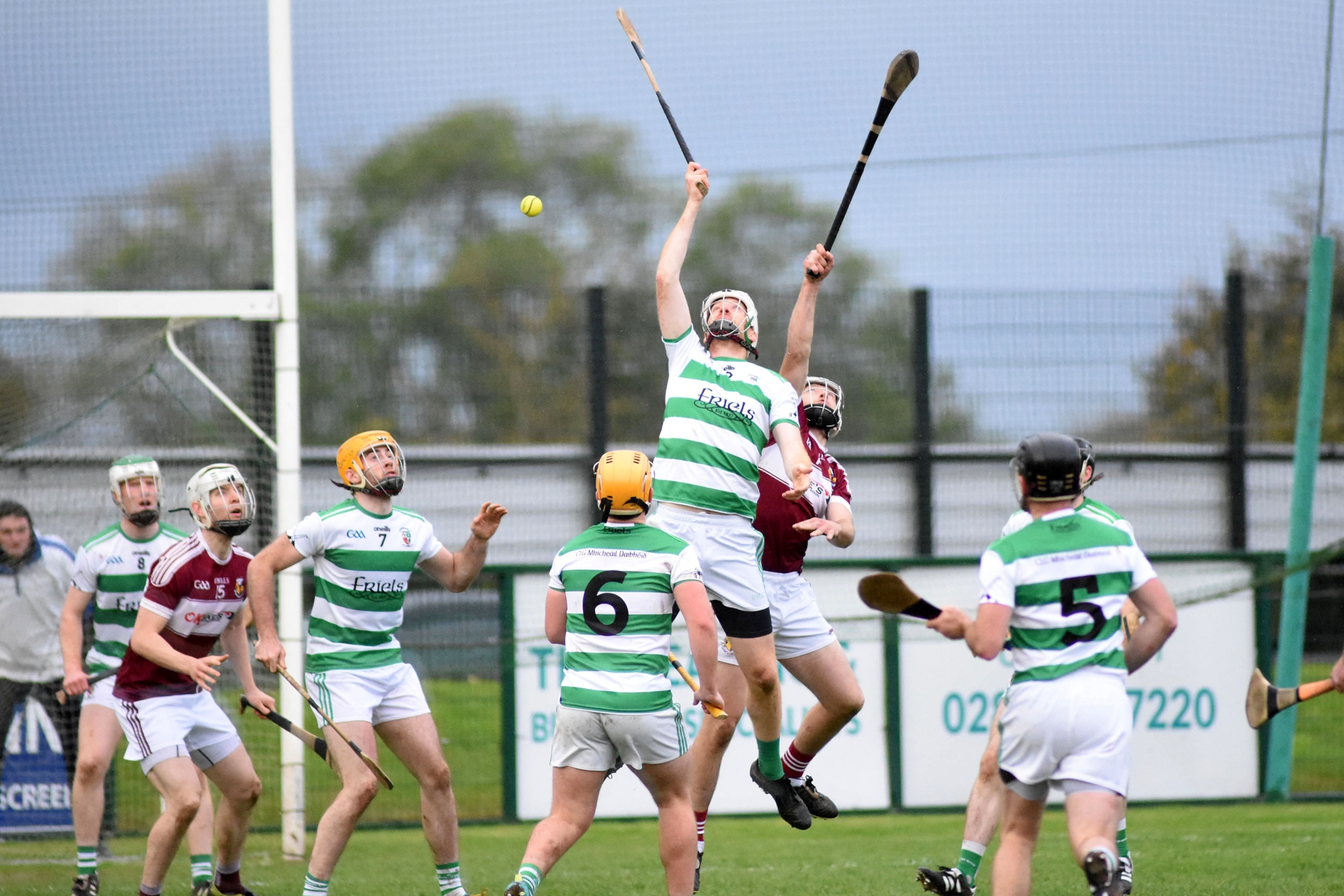 Banagher and Swatragh produced a thrilling encounter at Owenbeg on Saturday. Pic by Mary K Burke

Banagher came again, Conor O'Kane getting down low to deny Campbell after the goalkeeper's fumble had fallen kindly for the corner forward.

Campbell pointed a free won in the aftermath of the scramble, but Swatragh found a final flourish as points from Cathal Murray and a monster of a free from Cathal Quinn left them leading 0-9 to 0-3 at the break.

Swatragh emerged well aware of the containment job that awaited them against the wind, but got an early reminder anyway as Oisín McCloskey landed a long-range score to cut the gap on 33 minutes.

A low, accurate ball into the Swatragh forward line was flicked off to Fintan McGurk, who pointed to restore their six-point lead, but Banagher came again.

Ciaran Lynch split the posts almost immediately, before Brian Óg McGilligan collected the ball neatly on the run to fire over in the 41st minute.

Liam Eoin Campbell was then denied his fourth of the day by a superb Eugene McGuckin block, but the rebound fell kindly for Stefan McCloskey to point and leave Banagher just three behind at the water break. 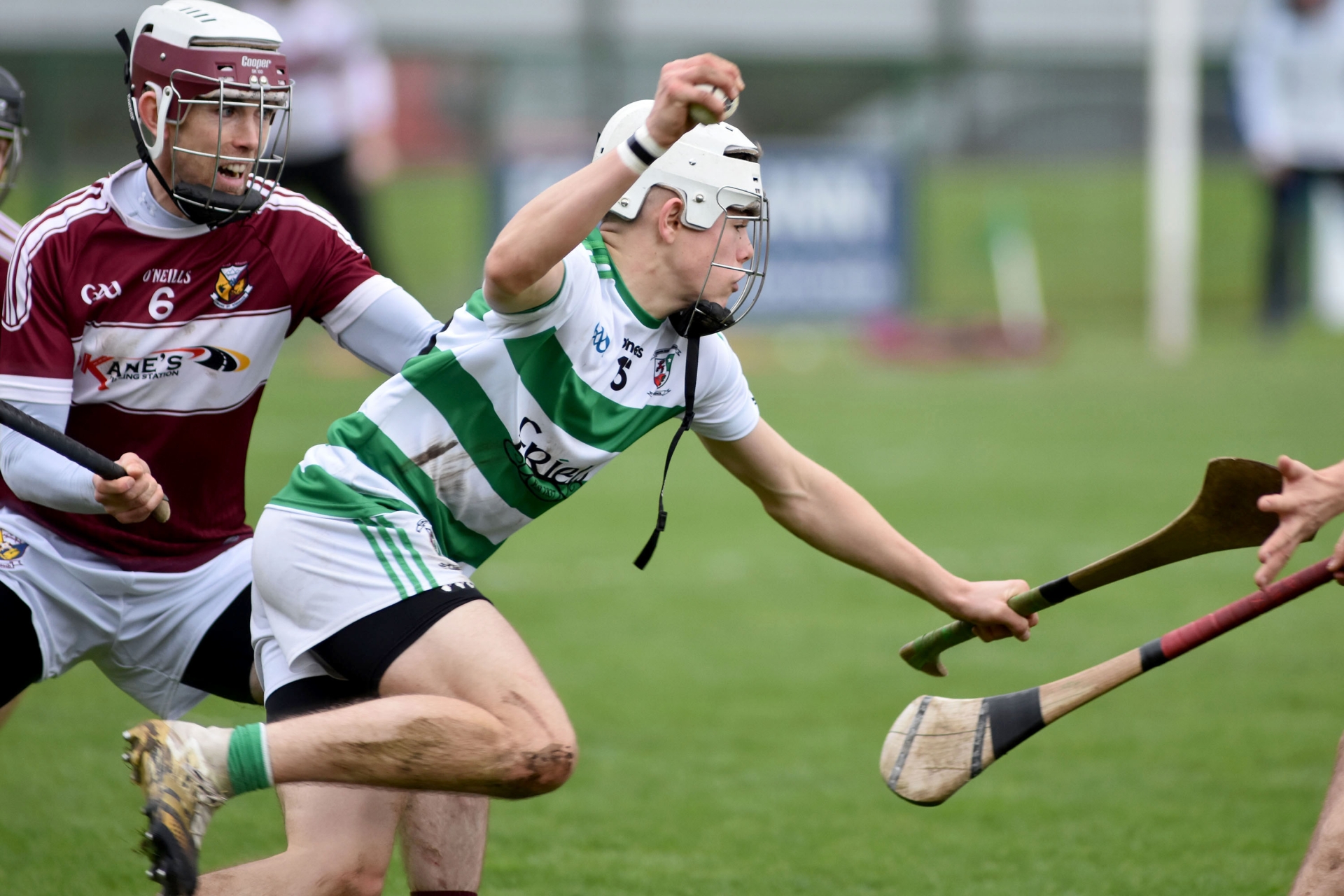 McCloskey added his second after the water break, and as the rain began to sweep in off the mountain, Banagher finally got the score Swatragh were trying so desperately to avoid.

In the 52nd minute, a high ball caused chaos in the Swatragh full back line, and with several men flailing on the ground, Brian Óg McGilligan found space to pull the ball home and give Banagher the lead.

The goal sparked a frenetic passage of play, with both sides hitting wides, before Swatragh levelled matters on 56 minutes through substitute Sean Martin Quinn.

There was relief as Davitt's reset, but it was short-lived, as Callum O'Kane found space and launched a monster of a point over the bar.

Brian Óg McGilligan followed up by pouncing on an error from Conor O'Kane to double the Banagher lead, before Sean McCullagh put them three up as the game entered stoppage time.

Fittingly, the final word fell to McGilligan, who topped over the insurance point in the 63rd minute, before he almost sealed his performance with a second goal, tapping wide when met with the whites of Conor O'Kane's eyes. 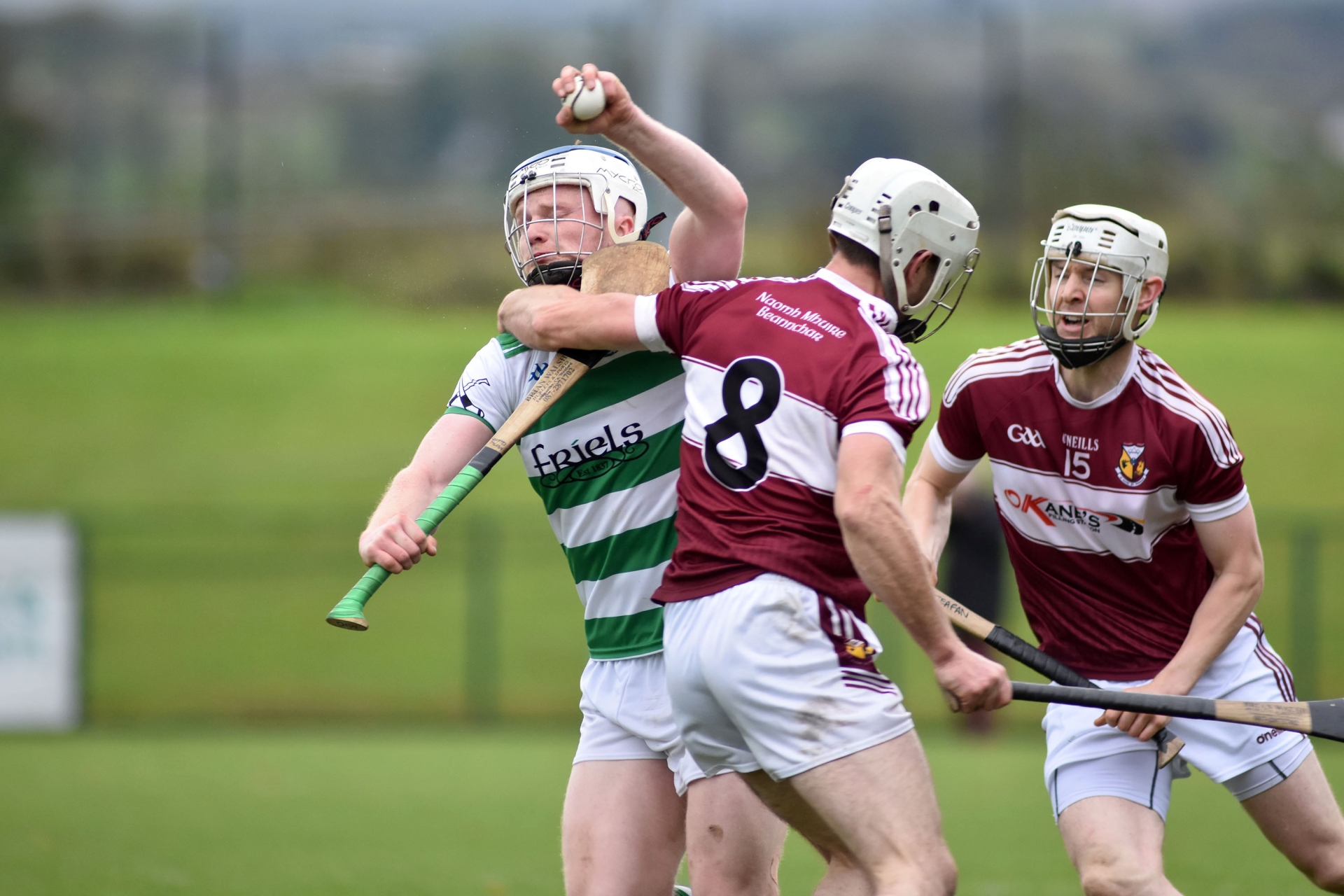 Swatragh will be disappointed with the result after a first half in which they rattled Banagher with fast, skilful, physical hurling, but the St Mary's men were dogged and devoid of panic.

They stemmed the flow of Swatragh's first half scores just enough to keep the gap down, and then relentlessly hunted Davitt's down in the second half until McGilligan's goal broke their resolve.

Under difficult conditions, St Mary's will be delighted to have overturned the half time deficit and will take heart from the grit and determination that drove them on.

Championship semi finals are about finding the victory, no matter how it comes, and Swatragh asked big questions of the north Derry men.

Largely, they had answers.

MAN OF THE MATCH
Brian Óg McGilligan - Sean Francis Quinn got through a mountain of work for Swatragh, but McGilligan was simply the match-winner. Playing inside, he notched 1-3 from play, including the crucial goal that nudged them ahead. The game required a leader, and McGilligan was that man for Banagher.

TURNING POINT
McGilligan goal - Banagher didn't have the lead in this game until the final ten minutes. Swatragh were under the cosh from the St Mary's attack, but hadn't looked like coughing up the goal until Brian McGilligan pounced on the loose ball and pulled it to the net.

SCORE OF THE GAME
Callum O'Kane point - O'Kane's display of emotion on 58 minutes was well-merited. Swatragh had followed up McGilligan's goal to level immediately, but O'Kane collected the ball in space, took a few steps forward into midfield and unleashed a huge score that roused the crowd and broke Swatragh hearts.