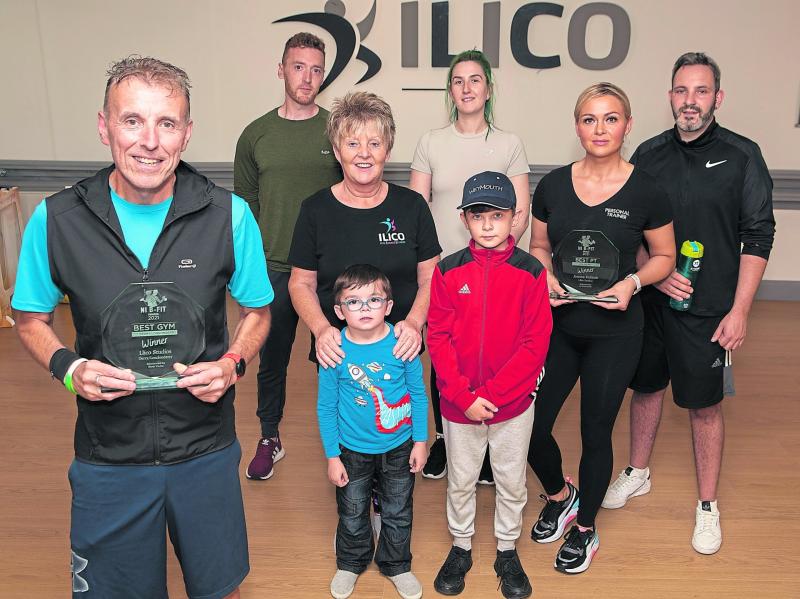 Local gym Ilico Studios is celebrating after receiving two huge honours at the recent the first B-Fit Awards at the Crowne Plaza Hotel in Belfast, run by River Radio FM.

Based on Spencer Road, Ilico was nominated for ‘Best Gym’ while trainers Joanna Kalisiak and Paul Woods were nominated for Best PT. To the delight of everyone involved, Ilico were big winners on the night, winning the ‘Best Gym’ award while Joanna was named as ‘Best PT’; Paul also finished in the top five in his category.

The recognition is seen as deserved reward for the hard work at Ilico in recent years. A small community gym, Ilico offers so much more than a regular gym, having already been recognised for its work with local youth in the past. Ilico also provides dance classes, private classes for special needs groups and a counselling service – Butterflies.

“We are delighted,” manager Wendy MacBean said. “I won a Contribution to Youth award back in 2017 so to get this now for the gym as well was just the icing on the cake.

"I think we got the award because we different to other gyms in the town. As well as the gyms, we do lots of classes and we also offer the one-to-one counselling service.

"We also do a lot of classes and groups for people with disabilities and we work with children with autism and ADHD.”

Started back in 2013, the gym has evolved over the past eight years, with youth work at the heart of its progress.

“It’s really been 8 years of hard work,” Wendy explains. “All the tutors and volunteers make this the place that it is. Our belief is that we are run by the community for the community and I think that has carried us to where we are today.

“We class ourselves as a big family in here. People have said to us that they get a feel-good vibe and it’s a good place to be. There are two things that we don’t have – there are no divas and there are no egos.

“We make it affordable for everyone as well and I think the most important things as well is that we’re based in Spencer Road so we have people all over the city – from the Cityside and the Waterside so they all mix together as one big happy family, which adds to our feel-good factor as well.”

Wendy was also thrilled with the recognition for both Joanna and Paul, insisting it was deserved for two very dedicated individuals.

“Paul has been with us since we started back in 2013/14,” she continued. “He also does classes and is a personal trainer and he helps out a lot with the Youth Project.

“Joanna joined us in January last year just before Covid kicked in so it has been a hell of a year for her. She had been great.

She does all the women groups and she helps out with the Youth project as well and she got first place. She was absolutely delighted with that because she has put in so much hard work so we’re delighted that she got the award because she definitely deserves it.”

Despite the recent awards, there will be no cooling off at Ilico, who have big plans for the future.

“It is a team effort here,” Wendy says. “I could not have done this without all the other tutors and volunteers that are here. More importantly, we couldn’t have gotten here without our clients. They are amazing. We do what we do for them and that’s our reward. This award as far as I’m concerned is for the clients because they are the ones who deserve it.”