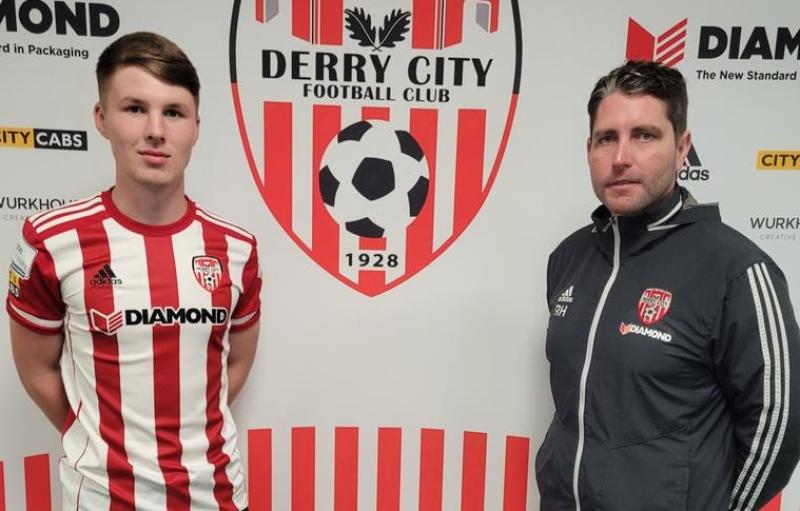 Derry City have signed midfielder Gerard Storey until the end of the 2022 season.

The 19-year-old, who spent some time with former City winger Ronan Curtis at Portsmouth, returned home to Belfast last year and spent the season with Carrick Rangers.

Storey actually played against Derry City for Cliftonville in last week’s friendly, and after seeing him in action, Ruaidhri Higgins wasted no time.

“I seen enough in half an hour, never mind 90 minutes, against us,” he admitted. “We were talking about him immediately after the game. He’s a young midfield player who, like a lot of young players, has come home from England due to the pandemic. He’s the type of player I like, he’s a deep-lying playmaker who gets on the ball, takes it off the back four and starts attack. He has a lovely range of passing and I think he’s the type of player who’s dying out of the game a bit.

“I think he will be a really, really good player for the club but we also have to be patient as you do with a lot of young players who have come back from England. It won’t happen overnight but there’s big potential with Gerard. We realise his qualities, hence why we made the move to bring him here.

The player himself is looking forward to getting started with his new club.

“After speaking to Ruaidhri and Paddy it was a no-brainer for myself,” he said. “I just can’t wait to get in and learn new things and develop. I know myself I have a lot still to progress in my own performances, but I know that Ruaidhri and Paddy will get the best out of myself so I’m delighted to be here.”