'Lure of hometown club could be too much for Paddy'

Former City defender now out of contract at Cliftonville 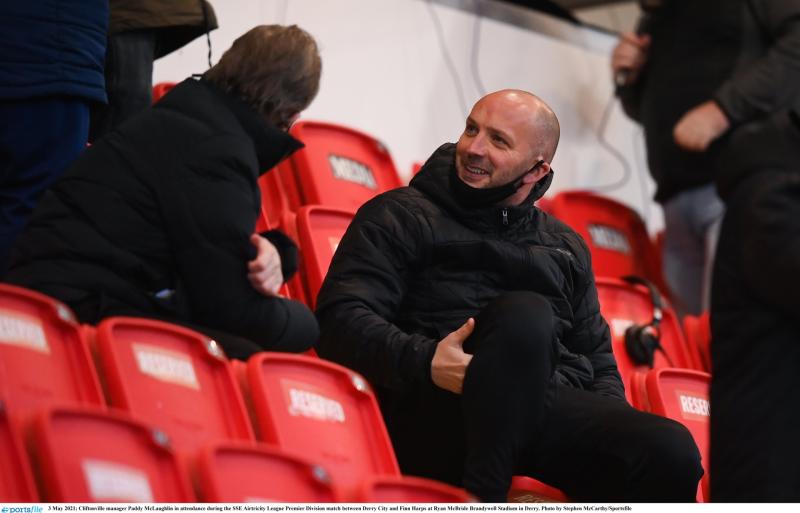 Paddy McLaughlin was at the Brandywell recently to see his former club in action against Finn Harps.

The lure of his hometown club could be too strong to resist for Cliftonville manager Paddy McLaughlin, who will decide his future in the coming days.

That is the view of former Candystripe Ryan Curran, who has played under McLaughlin at Solitude for over two years. Cliftonville lost out on European football next season when they lost 3-1 to Larne at the weekend, a game which marked the end of McLaughlin’s current contract at the club.

The former Institute manager is remaining tight-lipped at present, but he is now officially a free agent, with an offer to return to the Brandywell on the table.

“He came in two and a half years ago and he’s been absolutely brilliant for me,” Curran admitted. “I have made a hell of a lot of appearances under Paddy and I think the lads really do like him.

“I know he’s out of contract and there’s a lot of rumours that Derry City are involved, and that will ultimately be Paddy’s decision, but I think I can probably speak for all the players in saying we all love him; he’s been brilliant for all the boys.

“If he was to go, it will be a sad day, but at the end of the day it will be up to Paddy, Derry City and Cliftonville. Paddy has to look after himself too so whatever will be will be I suppose.”

McLaughlin arrived at Cliftonville as manager in February 2019 and in his two full seasons at the club, he has led them to fourth and fifth place finishes. Curran is in no doubt of the impact that he has made in his short time there.

“I do think he likes Cliftonville,” he continued. “I think he gets on with all the fans and all the staff around the club; he gets on with everyone, but the draw of your hometown club is huge. It’s on his doorstep and saves him travelling up to Belfast three times a week. I could see it from his point of view if that was his decision to take.”

Curran is just one player to flourish under McLaughlin, while Michael McCrudden has recently returned to goal-scoring prominence after a barren spell at Derry City. Curran puts these individual improvements down to the manager.

“When a manager puts his belief in you, you perform and I think Paddy is excellent at that,” he said. “He is good at getting the best out of his players and putting his belief in players. The likes of myself and Michael McCrudden and other players have benefitted from the trust he has placed in us. If Paddy decide to stay at Cliftonville, I’ll personally be delighted, but if he decides to move on, he is probably destined for big things in management.”

Defeat in Saturday’s Europa Conference League play-off was a massive disappointment for Cliftonville, with the club set to lose out financially as a result, a monetary boost which could have seen The Reds challenge the teams above them in the Irish Premier League.

“Disappointment is probably the over-riding emotion,” Curran admits. “It has been a long year. This was our 45th game and one of our coaches counted that we had 120 training sessions. It has been a long year but we missed out. It was a massive opportunity. I don’t think we lacked through effort; everyone busted a gut, but we just came up a bit short. It is a tough one to take.

“The expectation at Cliftonville is obviously very high, probably because of the fact that they won the league in 2013/14 and it’s in the fans’ memories because it’s in the not-too-distant past. Those expectations will always be there but it makes next season a lot harder.”