Allan praises strength of Derry running after smashing his own goal 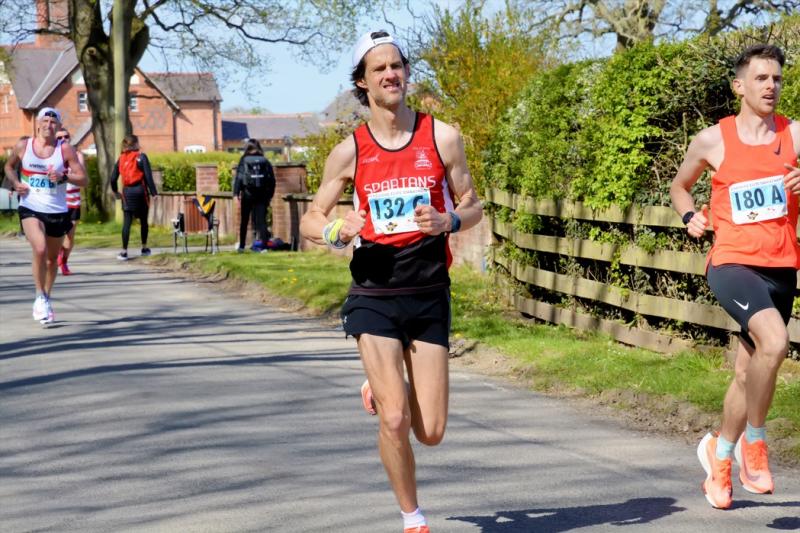 Allan Bogle in action during the recent Cheshire/ Wrexham marathon

The difference in a single second, from joy to potential heartbreak, tells the story of an elite runner’s mindset which led local City of Derry Spartan Allan Bogle to a sub 2:30 run in his first ever marathon.

Lockdown seemingly brought the best out of Allan, who, in turning 40 years old, set himself some unusual challenges.

It might have been boredom, it might have been his competitive spirit, it may even have just been for the craic, but Allan can look back on some fun memories and unique achievements in the past year.

He laughs when he looks back, but his innate desire for something more, something next is clear as he recalls how he made it through lockdown with cross country events across the country cancelled and no obvious alternative.

“Covid changed everything for me,” he admits. “I found it difficult to get motivated so I set myself different challenges for running.

“I decided I was going to break 4-minutes for running a mile by running it downhill. I set myself the challenge of finding a steep enough hill to do that. Normally people do it on the track and it’s very difficult, so eventually, after about seven or eight different attempts I managed to break the 4-minute mile by running downhill.

Typically a cross country and mountain runner, Allan brought forward a goal that was always on his bucket list – running a marathon, although he never would have envisaged that it would happen in the quaint surroundings of Cheshire and Wrexham.

“I always wanted to run a marathon but I always said it would be London, or Dublin or New York, a big city one,” he says. “I never thought I would run one like this, which was basically in the middle of nowhere. It was on country roads, no cities.

“During lockdown I ran a time trial on my 40th birthday and I wanted to try break 2h 40 minutes, as a personal challenge. I had a friend on a bike who paced me but I couldn’t do it; I think I got two minutes outside what I wanted to do. After that I realised that there needed to be a wee bit more training and a wee bit more thought behind it and if I planned out the training a bit better it would be achievable to get a decent time.” 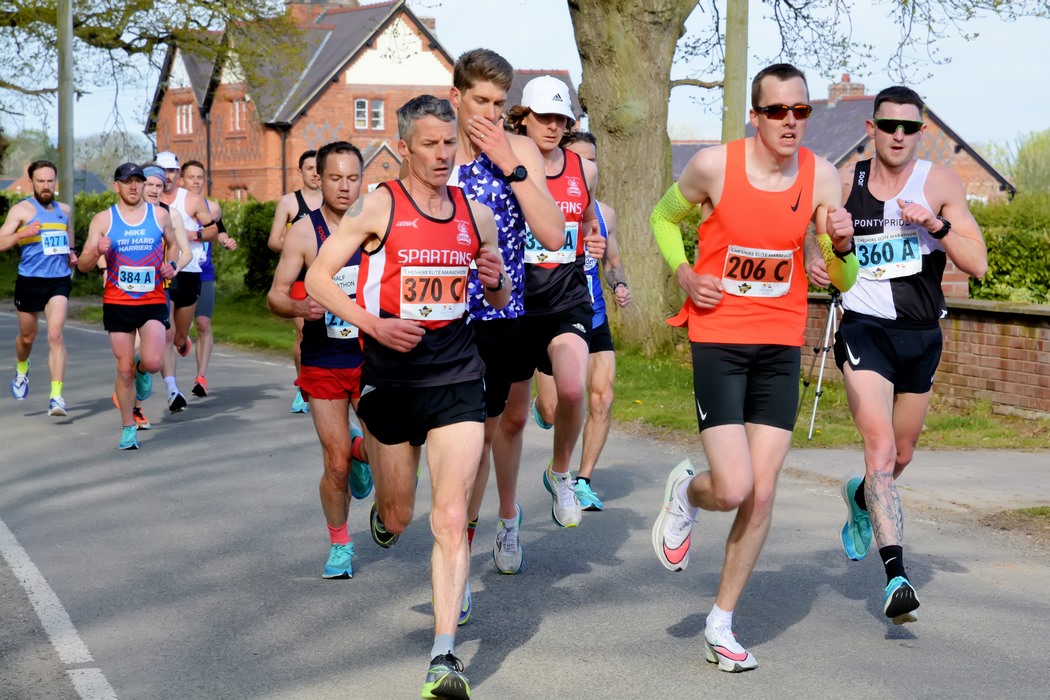 Allan’s goals was a sub 2:30 time, and to his absolute delight, and a touch of relief, he did just that, although by the narrowest of margins.

“It’s a funny one actually because leading up to it, everyone was asking what I would be happy with and I said “If I’m one second under 2hours and 30 minutes I would be happy”,” he explains. “My goal time was 2 hours 29 minutes and 59 seconds and that’s exactly what I ran. I crossed the line and my watch told me I had one second to spare.

A host of Derry runners joined Allan in Cheshire and as usual they made their presence felt. Declan Reed led the red vests home in a brilliant 2.25.13 with Steven Mc Alary romping home on his debut marathon in a fantastic time 2.26.44.

Kyle Doherty, returning from injury, was on pace making duties, helping partner Ann Marie McGlynn to a superb 2.29.34, missing the Olympic standard by an excruciating 4 seconds.

In the half marathon, Paddy O’ Donnell returned after illness to post a great PB with 72.40. Ciara Toner, wearing the Spartan red vest for the first time, also bagged a PB with 77.48.

It was an admirable showing all told by the Derry runners.

“I am completely over the moon but it’s a bit of a reality check as well because I’m only the sixth person from Derry which just shows the strength of running in Derry at the moment,” Allan adds. “That shows the depth of running in the city. I don’t know if it’s because of Covid and people have been able to concentrate on their training but, there’s a real strength that I don’t think there’s ever been before.

“I can’t imagine there’s ever been a race where there’s been six people from the one city of our size to have broken 2:30 in a marathon. It’s actually pretty impressive and actually all of us, apart from one, are veteran runners, we’re all over 35 or 40. There’s a real strength in veteran masters’ runners at the moment.” 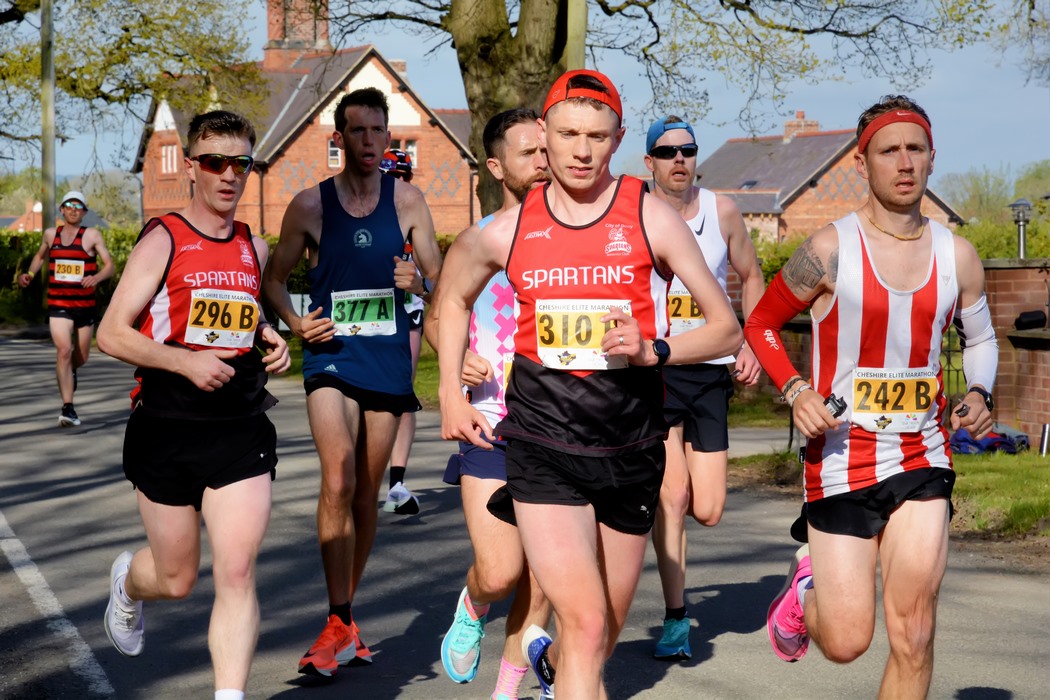 These superb individual and collective achievements come on the back of the recent documentary-film ‘It Runs Deep, which starred Spartan Conor Bradley, and which explored the mindset of an elite runner. Allan, a training partner of Connor’s, believes the film perfectly explained the sacrifices and discipline needed by any runner at that level.

“If you watched Conor’s documentary there was a quote in it – “I don’t separate running from my life”. Every decision I make is based around running, it’s just the way I am,” he explains.

“It is a passion but I don’t know where it comes from. It’s always been there. Family comes first obviously but running is a very close second.

“One of the things I enjoy now is that my children can watch me. They were watching online all day; they got up early to watch the start of the race. It was at half 8 in the morning and it was streamed live and when I got back from England they were able to tell me all these things I didn’t know. I love that side of things too, inspiring youngsters to want to be runners, and if not runners, just be active and do something.

“I said to someone afterwards that there is no difference between someone like Conor and Mo Farah. They are both runners and it goes through their core. I was running with Conor and he was calling me a superstar and I was calling him a superstar because he ran a really good time on Sunday last in the 5000 metres.

“I think runners just have this mutual respect; it doesn’t matter what level you’re at, you know what they have to go through. You’re getting up at 6 o’clock in the morning and it’s dark and it’s raining or snowing and you’re heading out the door and there’s no financial gain in it.”

Now that he has broken sub 2:30, Allan already has his sights set on his next target. The world is just now coming out of lockdown, and this Spartan is just beginning to build some momentum.

“My wife doesn’t get it at all. She doesn’t know why I put myself through the pain and the suffering of it but I think she’s just learn to accept it now,” he laughs.

“A lot of people say that once you finish a marathon you never want to see another marathon, but straight away afterwards, and a few days later after the pain goes, you start thinking about your next one.

“Walking back from the finish line to the car I was bumping into other runners and asking them for recommendations straight away because I just want to do it again. I loved every second of it.

“On Monday past I was emailing Manchester to see if I could get into the elite entry in Manchester. I want to get one as soon as possible. I want to get an autumn one and 2:27.5 would be my next goal. I will try to come down. I think I’m capable of breaking 2:25 but maybe London next year I’ll go for another really good time. I’ve got the bug and the first thing I was thinking about as I crossed the line was “How can I get another marathon?”.