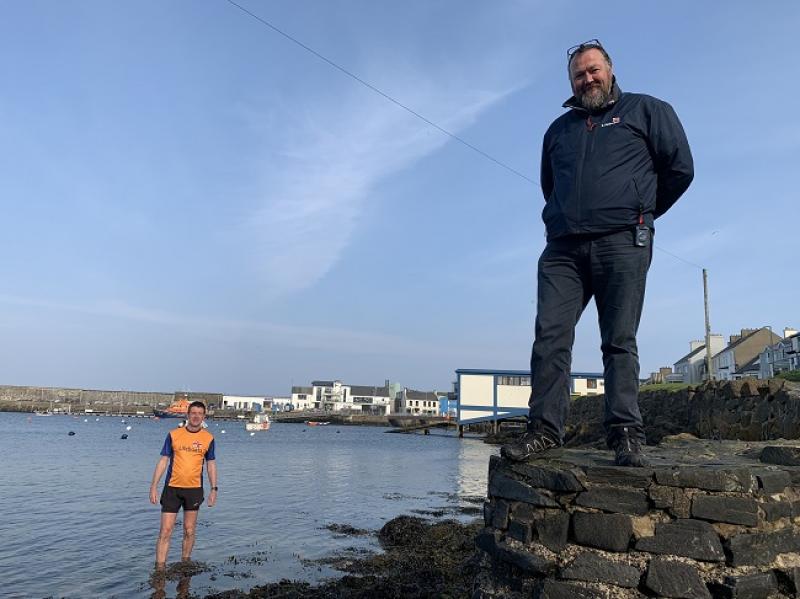 Springwell Running Club member and long-time supporter of Portrush RNLI, David McGaffin is taking the RNLI May Day Mile Challenge to a whole new level to raise funds for the station.

The McGaffin family has a long association with Portrush Lifeboat.

David’s late father Tom was an integral part of the fabric and indeed was one of the crew on the famous shout in 1989 when the lifeboat was launched to reports of two Spanish trawlers in difficulty.

“The first marathon I took part in was Belfast on the 6th May 1985 and was in aid of the RNLI,” David points out.

“There was a lot of blistering, some bleeding and an amount of distress so the fact that the race is always held on Mayday, which is also an international distress signal, is not lost on me.

“Growing up in Portrush, especially if you fish and mess about in boats, you are very aware of the work that the RNLI does and the amount of money that it takes to keep the service operating.

“My father, Tom who was a RNLI member for many years, initially as a Shoreline member, then lifeboat crew and latterly as the deputy launch authority, spent many years fundraising for the RNLI and was one of the founder members of the Portrush Raft Race.

“The RNLI, especially the boat crews, can be a self-deprecating bunch, and do not take praise well. To them it’s just a job they do, and once a mission is over, they get ready for the next one.

“I have been fortunate to know many crew members, including some who served on the Portrush Lifeboat in the 1960’s.

“I have been on boats running for the cover of the harbour in bad weather as the lifeboat launches to someone in distress, and have stood safely on the harbour wall watching the lifeboat head out into the worst weather that the North Atlantic can deliver.

“What I do know about the RNLI is that they are ordinary people doing extraordinary things and deserving of all the medals, commendations and plaudits they receive.

In the absence of the Raft Race I will be taking part in the RNLI Mayday! Mayday! Challenge, but taking it just a bit further.

“The challenge is simple, set an exercise goal, raise some sponsorship and then complete it. Those of you that know me will know that it’s not going to be that straightforward, there’s no point doing it if you’re asking for money.

“I know that you expect some degree of pain, suffering and sacrifice to part you from your hard earned cash, and to that end I will be running the date each day. That’s one mile on the first, two on the second, three on the third and so on.

“To save you from doing the maths the first week is handy enough, week two is alright, it’s tougher going in week three, week four is insane and the last three days just mad. To complete this challenge I will have to run more miles in a month than I have ever done before and week four will be the most miles I will have ever run in a week.”

Funds can be donated via the link: www.justgiving.com/team/go-the-extra-mile