FEATURE: Over 50 years of Sky Blue football in Magherafelt

We chart five decades of Magherafelt Sky Blues from their inception in 1970. 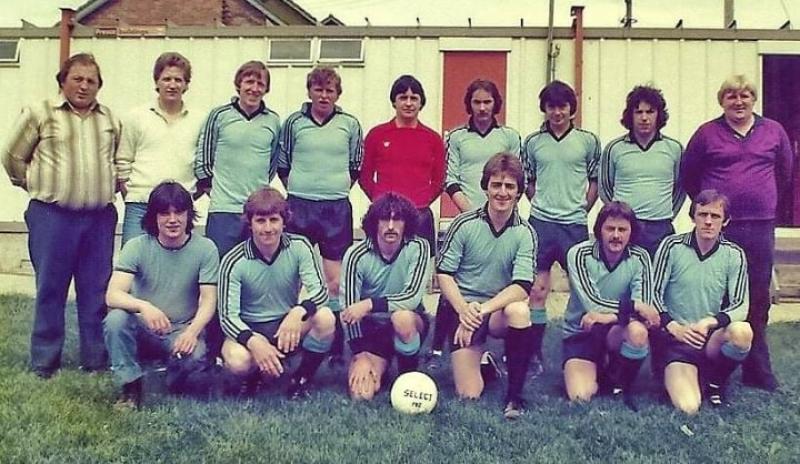 In picking a name, they landed on one that is now synonymous with football in the Mid Ulster area, but one that had its origins in England's West Midlands.

There was even a local link, with County Derry-born goalkeeper Eric McManus in the Coventry squad at the time.

With the name now in place, Eamon Kelly assumed the role of manager, and after sourcing a second-hand kit from nearby Bridgend United, Magherafelt Sky Blues entered the Moyola Summer League.

Before long, the side had progressed to the Coleraine and District League, and first tasted success in the 1977-78 season when they were promoted to Division 1.

The 1970s were also marked by regular Easter trips to the Isle of Man, where the Sky Blues certainly enjoyed there time away .

The club were hit with a double whammy to begin the 1980s. Their relegation to Division 2 was quickly followed by the death of manager Eamon Kelly.

Kelly's death prompted the club to form the extremely popular Kelly Cup, a competition run in conjunction with the MAD May Fair.

Despite founding the competition, the Sky Blues were forced to wait a decade to lift it, winning it just once, in 1992.

Assuming the managerial reins in 1985, Jim Sanderson and Mukesh Chada led the renaissance.

The club returned to Division 1 in 1986, before completing a league and Constitution Cup double the following season.

A reserve title was also delivered the same year. Under the guidance of Davy Chada, the Sky Blues clinched the South Derry Winter League.

Intermediate football beckoned, and the Sky Blues answered. They joined the Mid Ulster Intermediate League in 1988-89, with Matt McSwiggan joining the managerial team.

The club's first silverware at Intermediate level arrived quickly, with victory over Dungannon Swifts II in the prestigious Bass Bowl on December 28 1988. 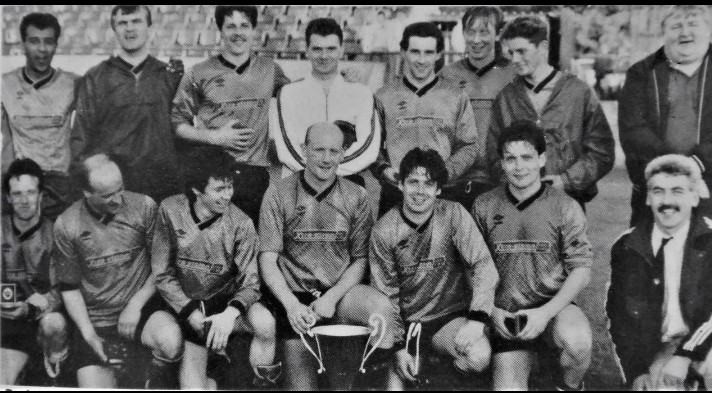 The Sky Blues team who defeated Loughgall to win the 1990-91 Premier Cup at Stangmore Park, Dungannon.

Success continued in the early 1990s, with the Sky Blues defeating Loughgall to clinch the Premier Cup at Stangmore Park, Dungannon, in the 1990-91 season.

Travel, though, had become an issue in the Mid Ulster League, and the club opted for a change in scenery for the 1991-92 season.

The North West Intermediate League was full of talented sides, but with Derby Rankin in charge, the Sky Blues hit the ground running.

The won the NI Harp Challenge Cup at the first time of asking, and added the Kelly Cup to the cabinet the same year.

Highly rated coaches Gerry Kelly and Ray Kennedy steered the team through the next two seasons, before Mukesh Chada and Robert Niblock had their own two-year stint.

A youthful Anthony Campbell took charge of the team in 1997,a role he would hold for the next decade, placing a focus on bringing young players through in what was a tough league.

Steady progress marked Campbell's tenure, with the Blues finishing runners-up in the Challenge Cup in 1998-99 and winning the McGrogan Cup the following season. 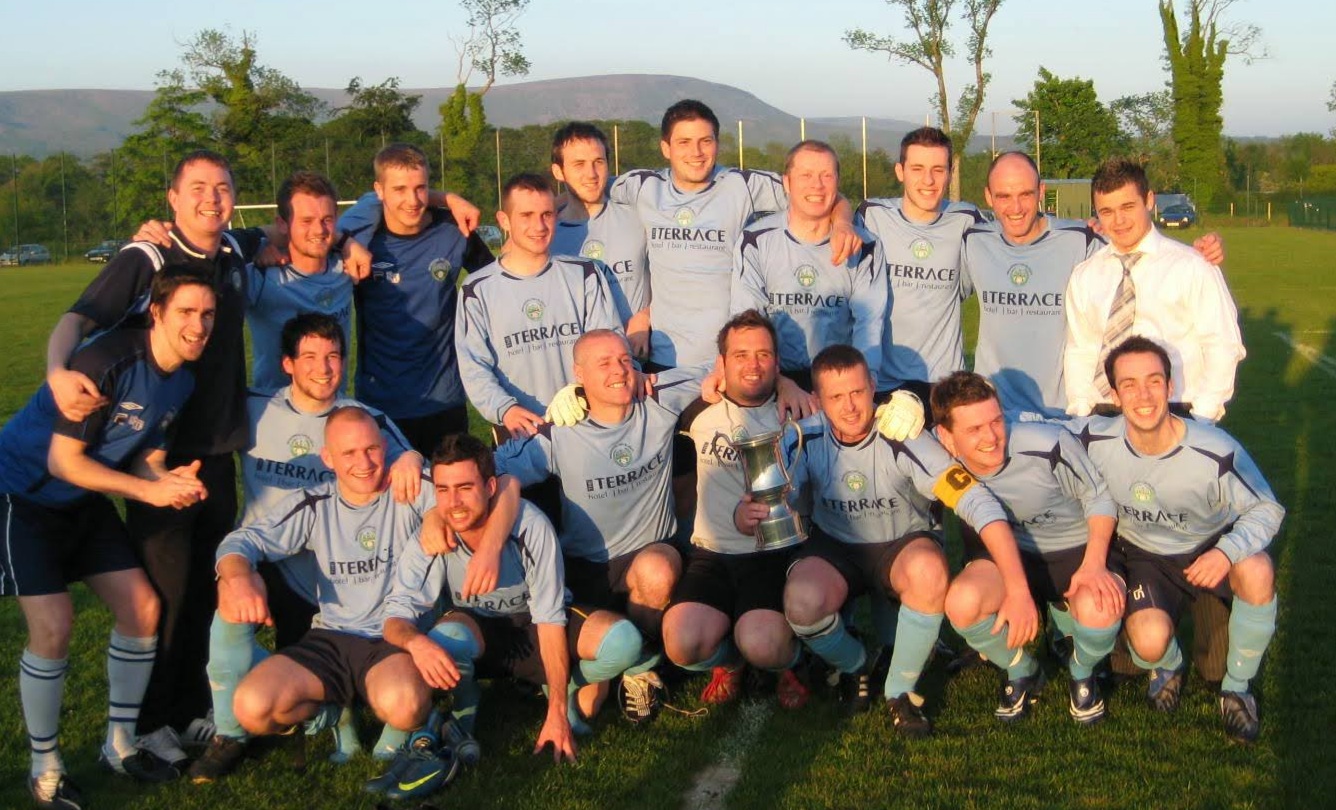 The Magherafelt Sky Blues team who won the Challenge Cup in 2009.

With Robert Rainey added to the managerial team at the turn of the Millennium, the progress continued and the club narrowly missed out on the 2005-06 league title.

The Sky Blues took home the McGrogan Cup again in 2006-07, but once again lost out in the final of the Challenge Cup.

The side would go on to lose two further Challenge Cup finals, losing to UUC in 2007 and Dungiven in 2008, before taking two titles in a row against Newbuildings in 2009 and Oxford in 2010.

Robert Rainey then stepped into the boardroom, taking on the role of Chairperson, and Anthony Campbell recruited Stevie Jordan as coach.

The team reached the final of the Craig Memorial Cup for the first time in their history, but suffered defeat.

The Club then made an ambitious move by forming a brand new U21 side that produced a lot of new players for the Club .

They entered the Ballymena league, and were promoted in their first season and reached the final of the McReynold's Cup.

Having overseen the successful formation of the U21 team alongside Brian Beattie, Sean Monaghan assumed the senior role for 2009-10, with former Irish League player Brian Martin joining as coach.

The Senior side successfully defended their Challenge Cup, but lost out on the league title by a single point.

Highly respected coach Seamus Quinn joined up with Monaghan for the 2010-11 season, but it proved an anti-climax, prompting the club to try their luck in the Ballymena Premier League.

With Quinn now in sole charge, the BIPL proved a tough challenge. Despite leading the table at the turn of the year, their title challenge seemed to fall away repeatedly in the latter half of the season.

After four seasons at the helm, Seamus Quinn was succeeded by Gareth Pitts, but his tenure only lasted one season and the Blues opted for another divisional move, returning to the NW Intermediate League.

There was drama at the beginning of the 2017-18 season when new manager Conor McCulloch, recruited by new Chairperson Brian Surgenor, resigned before the season even kicked off.

Brian Taylor took charge, enlisting the services of Sean Monaghan as assistant, and the duo led the Blues to a momentous league title.

The title was clinched at Spires with victory over Trojans, and the club's first Intermediate title sparked wild celebrations. 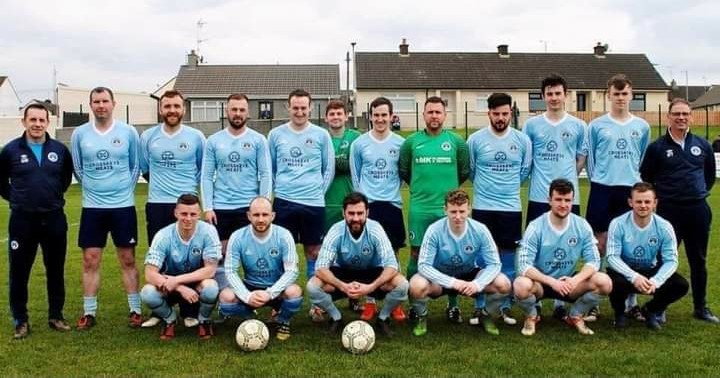 The side that won the 2017-18 North West Intermediate League title. The season had started amid managerial upheaval.

Ciaran Monaghan, Gary Rafferty and Conor Monaghan took charge of the Blues side for the 2018-19 season, and despite topping the league at Christmas, the title slipped away in the latter stages.

With David Kelly newly installed as manager for 2019-20, the team were mid-way through the season when the Covid-19 pandemic ground everything to a halt.

In the same year Conor Donnelly formed the Clubs Over 35 side and this team played regularly and even entering into an Old Boys league . 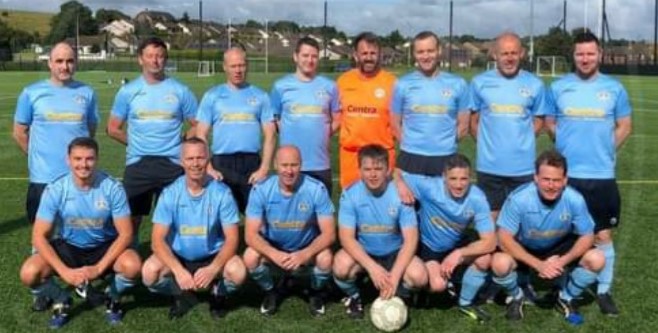 This team proved very popular they never struggled to put a talented squad out . A trip to Portugal had also been arranged only for Covid to strike before the team could get away .

The Blues have now returned to junior football in a bid to ensure adult football remained a part of the club, and were preparing for the Coleraine league when Covid cancelled the 2020-21 season.

Like all other clubs, they are waiting. Waiting on the moment they can lace the boots and pull on the Sky Blue jersey once again.

All associated with the club hope it won't be long.