Miserable night for Derry City as they lose in Longford 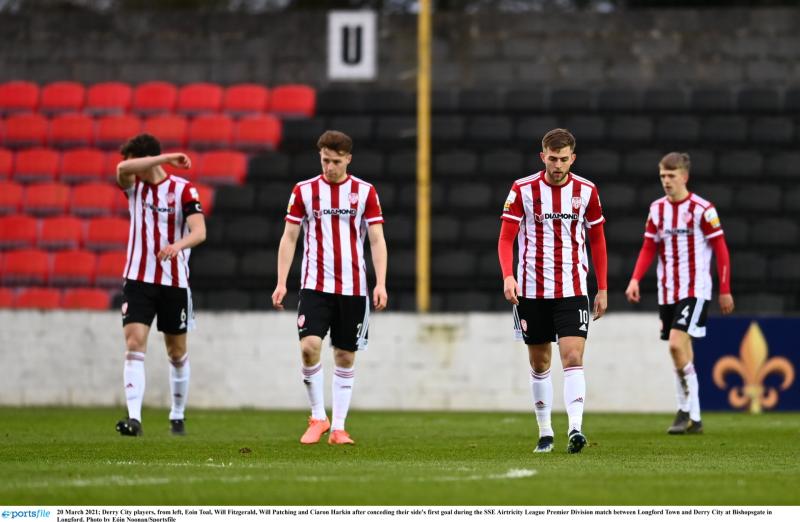 Derry City’s season got off to the worst possible start as they were well beaten by newly-promoted Longford Town at Bishopsgate.

Declan Devine’s team barely threatened throughout and they were second best to a Longford team who showed a great hunger and desire to win in their first game in the Premier Division since 2016.

City were almost caught out within two minutes as Ciaran Coll lost out in a challenge in midfield and the home side broke forward. Eoin Toal was faced with two Longford attackers and they worked it well, Rob Manley playing in Dylan Grimes, but with Darren Cole closing in, he curled his shot beyond Nathan Gartside but just wide of goal.

A spirted start from Longford got its reward just 8 minutes into the game when Grimes received the ball on the right corner of the penalty area, and easily got the better of Danny Lafferty before racing into the box and drilling the ball right across goal. A number of players bore down on goal and that may have affected Gartside, as the ball went untouched into the far corner of the net to give the home side the lead.

It was a poor first half overall for Derry, but Longford goalkeeper Lee Stacey was finally called into action just before the break a City finally managed a shot on target. A cross from Fitzgerald fell for Parkhouse, who, off balance, did well to swivel and met the ball with his left foot, but the shot was too close to Stacey who was able to save.

Declan Devine made two substitutions at the break, with both Danny Lupano and Jack Malone coming on for Darren Cole and James Akintunde. But a series of half chances from corners aside, City rarely looked threatening.

The game’s decisive moments came after the 70-minute mark when, moments after Malone went down in the area, Longford broke and won a free kick.

Aodh Dervin went for the shot and Gartside could only parry straight into the path of Gorman, who couldn’t miss from two yards as Longford doubled their lead.

It quickly could have got even worse for Derry as a confident Devin went for goal again – this time from 30 yards and his effort had Garside scrambling before it crashed back off the crossbar, as Longford threatened to embarrass Derry.