It's back! Can Derry City end the first weekend back on top of the league?

City ready for first visit to Longford since 2016 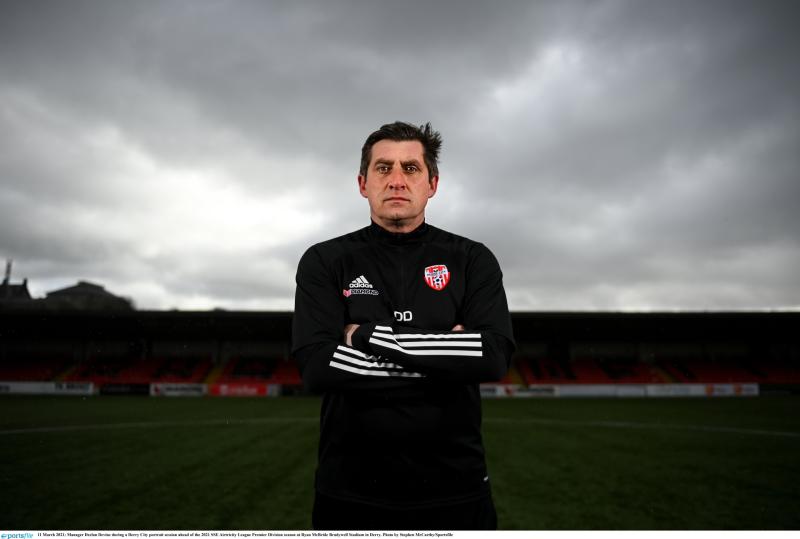 Declan Devine believes that Derry City can get back into a position for challenging for trophies every year, after some positive changes behind the scenes in the last few months.

The Candystripes kick off a brand-new season at Longford Town today, hoping to put the misery and disappointment of last year behind them, when they finished in a lowly seventh amidst poor performances and results.

A new season has renewed optimism at the club however and the arrival of several new faces has brought a new energy ahead of the first game this evening.

Danny Lafferty has returned to the club after 10 years away, while David Parkhouse, such a hit in his debut season two years ago, will lead the attack once again after signing a three-year deal at the club. Defender Danny Lupano has also returned on loan from Hull City, while exciting youngster Joe Hodge is at the club on a short-term deal from Manchester City.

Will Patching, Will Fitzgerald, Marc Walsh and Aaron Harkin have also arrived, while there have been professional deals given to academy youngsters Jack Lemoignan, Ronan Boyce and Patrick Ferry. Nathan Gartside, who this week received an international call-up for Northern Ireland’s World Cup Qualifiers, is the new number one at the club following the departure of experienced goalkeeper Peter Cherrie.

It all adds up to an exciting time for Derry City fans, who will gain watch on from their on homes due to the Covid-19 pandemic, and Declan Devine is determined to give the fans something to shout about this time around.

Asked whether he would like to have a trophy in his hands or a stadium full of fans come the end of the 2021 season, Declan Devine doesn’t hesitate.

“Easily a stadium full of fans,” he insists.

“Football is crap without fans. It is crap. It is basically rubbish without fans. For me, it misses its soul, and we need the soul back and the soul for us is four and a half thousand fans and this place full. That’s just the best thing ever and hopefully we can uphold our side of the bargain and win enough games so that whenever it is open to the fans, they have something they can come back to and play for.”

Derry City’s methods have been erratic and inconsistent in recent years, with the club signing well over 80 players since 2015. That could well be a thing of the past however after recent changes at the club.

“The positive from the off-season this year has been a better outlook in terms of where we can go,” Devine explained.

“Derry City over the course of the last 10 or 12 years have finished in the bottom half more than they have finished in the top half, we’ve won five FAI Cups and two Premier Division titles in our history, and it’s not enough. We have to understand that we have to put stuff in place that will enable us to get back to where we belong, without taking away the fact that we have got to win football matches.”

Derry City begin the new season today in Longford, a newly promoted team which will test just how hungry this new look City team really is.

“It’s going to be extremely difficult,” Devine agrees. “Longford have been fighting for years to get into the Premier Division. I’m delighted to see them back because I think it’s a brilliant club and a brilliant area of Ireland that needs senior football. They have a really up and coming manager who has done a fantastic job there.

“We know going to Longford, especially for their first game in the Premier Division, that they fought so hard to get into, the people of Longford will be watching online and they will be looking to hit the ground running.”

Following last night's results, Derry City could go top of the league with a two-goal victory.