One of the great Derry teams - Unbeaten Ashfield FC

“I’m going to be honest. That team didn’t need a manager.” 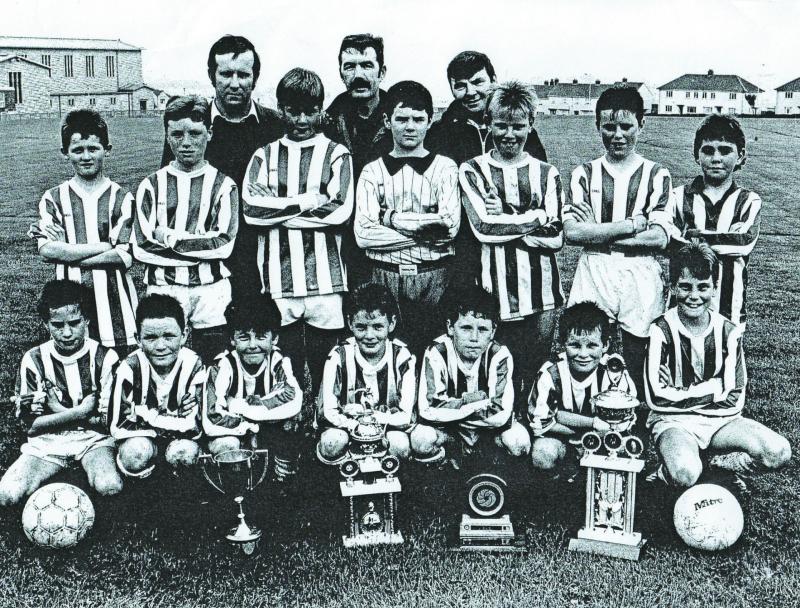 Nothing hits harder than the realisation of how quickly time is passing us by, especially when you realise that 1994 was almost 30 years ago, the year that unbeaten Ashfield FC played its final game.

For many of us, those were the days of our childhood, for others, the days of parenthood, but 1994 was officially a generation ago, and while the photographs may mostly be black and white in print, the memories remain full of life and colour in our minds.

Ashfield FC played its last game in 1994, beating Top of the Hill Celtic 1-0 at the Brandywell thanks to a spectacular goal from William McGuinness that still raises debate today.

Whether he meant it or not, (and who would take it off him at this stage), the goal meant that one of the most successful D&D teams of a generation went out the way it came in – winning.

A team that produced so many recognisable football careers, almost too many to mention, Ashfield went seven years, from 1987 to 1994 without losing a single league game.

That’s not to say they were infallible – they did lose three cup games in that time – but it is a fact that even the passing of time cannot erode – Ashfield FC were a winning team.

Charles ‘Nucker’ Tierney, with Gerry Duddy alongside him, was the manager from ’87 right through to that day at the Brandywell in ’94, and he looks back on the team with an understated pride in the games they shared, the trophies they won and the memories they created together.

“The team I had started off at U11s,” he explained.

“The majority of those players stayed and we were never beat in a league match from ’87 to 94’. You lost players along the way but you always brought ones in to replace them. A lot of our players were Creggan based and Rosemount. We have to thank Michael McDaid from St. Anne’s School, who recommended players to us and that’s where the majority of our players came from.

“They were all good players there and there were some good young fellas there and very decent players.”

At a time when the D&D age groups went up in two-year increments – from U11 to U13 to U13 to U17, the boys of Ashfield, and from other teams at the same age group, would often play against opponents at least a year older. It was all a vital learning experience however, and the number of well-known players to come through Ashfield is significant, a who’s who of players who made a career out of the game, one way or another.

“In that team I had from the start, there was a wile lot of them who went on to play for Derry City,” Nucker says.

I could name a whole lot of boys who played for us and played for Derry. There was also Darren McCready, Floyd Gilmour, Damian Redden, Tommy McCallion, Kevin McHugh and Paddy McLaughlin, the current Cliftonville manager’. 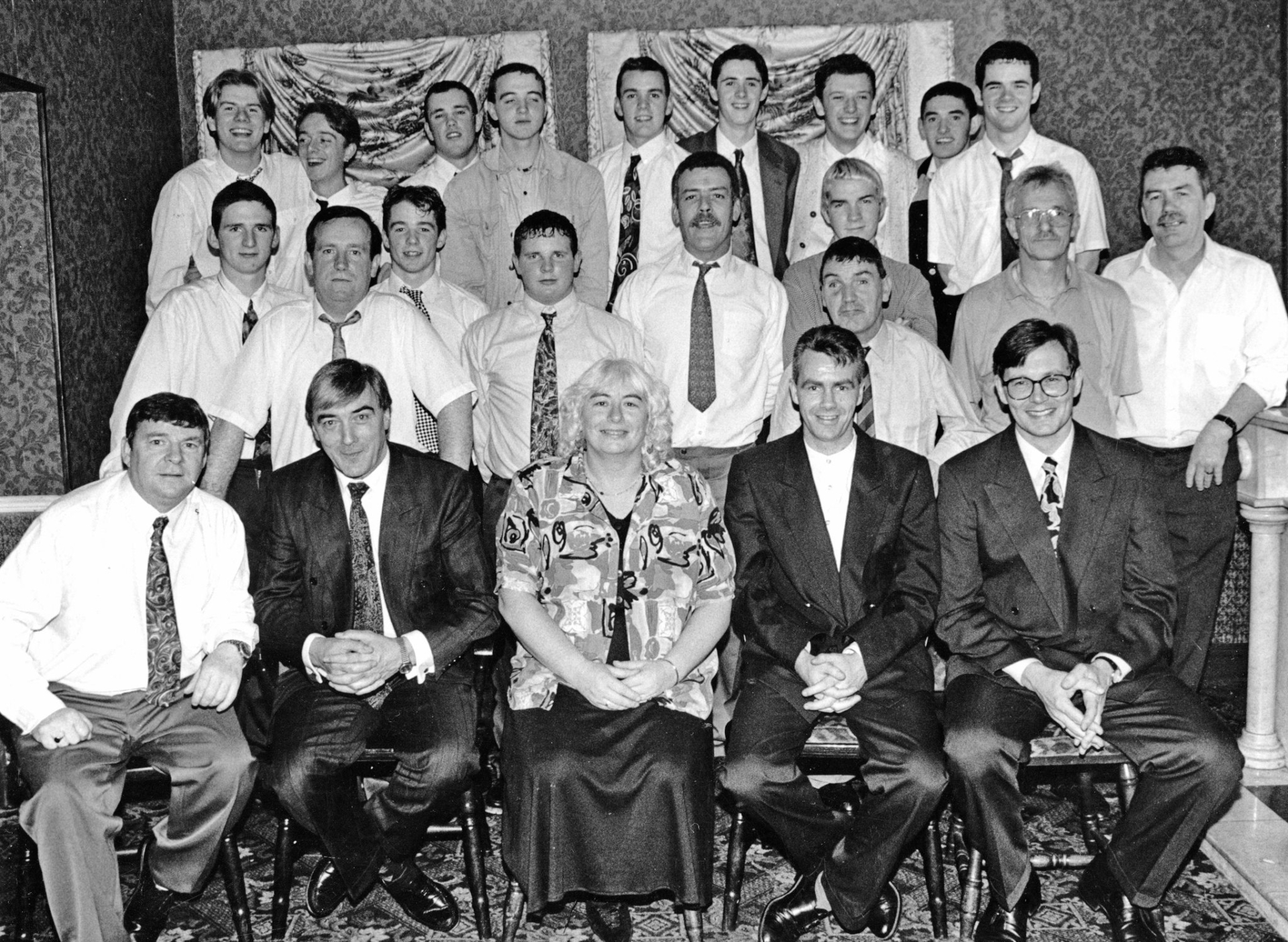 In the late eighties and early nineties there were three teams in the Creggan area – Ashfield, Trojans and Creggan Celtic – ‘We all got on great’, Nucker adds. “There were never any rows between the three teams’ – competition was everywhere.

With a stable squad from one year to the next, Ashfield were a team to be reckoned with, with a strong base of players that would go on to do well at senor level. Throughout those seven years, trophy after trophy arrived, but, despite being manager every step of the way, Nucker insists all the credit belongs with the players.

“I’m going to be honest. That team I was running didn’t need a manager,” he insists.

Some of the young fellas who were subs mightn’t agree, but that’s what it was to me – the team picked itself. They were that good.

“There were no arguments and no fighting. The best thing about it was that every young fella that played for Ashfield, at the presentations, every one of them, at every age group, all got a trophy. No young fella was ever left out, whether you were good or bad, it didn’t matter. Once you played for Ashfield at all, win or loss, everybody got a trophy. Nobody went home empty-handed. There was no such thing as “he was the best player’. Every young fella was classed the same and everybody was treated the same.”

It all had to come to an end at some stage however, and it did so memorably, McGuinness scoring from the halfway line to win the cup and ensure that Ashfield went out with a trophy in their hands.

“William McGuinness scored from the halfway line in that game but I don’t know if it was a clearance or not,” Nucker recalls.

“That was the last game because at that time, there was no such thing as an U18 team in the D&D. When you were 17, that was when you finished in the D&D and that was the same for everybody in that age group. We had no option but to finish because there was no U18 league.

“The best memories were the trips to Manchester however. We took them wee lads over to Manchester every Easter for four or five days. We even played Man. City U18s and drew 2-2 with them. We would go over and play Stockport and things like that and everybody got a game.

When we played City, we went to the Man. City game that afternoon. Joe Harkin and Steve Lomas met us and all the lads got programmes and good seats and they were all well-treated.” 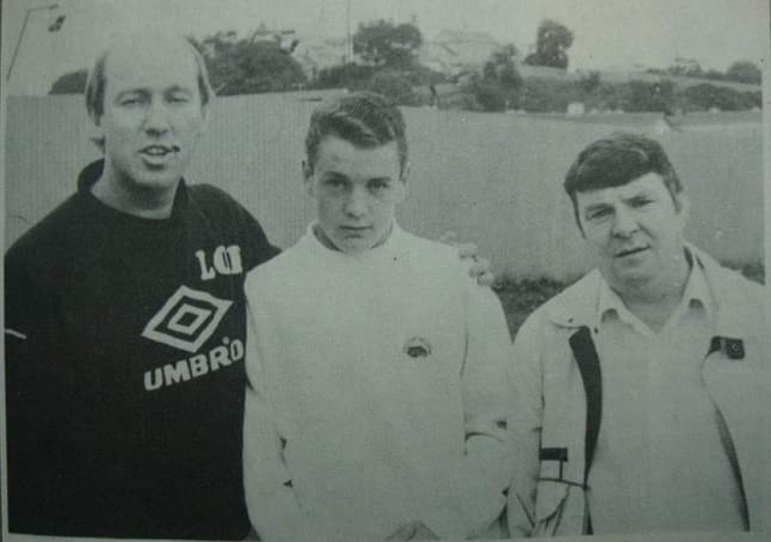 It’s all about those memories for Nucker these days – be it Damian Redden going over to Nottingham Forest in 1992, or John McGarvey going to Leeds on trial, before coming back to play for Derry City’s first team when he was only 16.

It could also be the ‘All-conquering U17 team’ which won the ‘Team of the Year award’. (That is pictured above with Michael McLaughlin, Damien Reddin, Jason McDermott from Moville the only players missing.)

It could be the unbeaten league record, or anyone of the countless trophies that Ashfield won. It could be the players themselves, and the team spirit which brought them through so many challenges.

There doesn’t have to be a favourite memory, because, while almost 30 years have passed, the legend of Ashfield remains. Not even the photos can tell the whole story, but those who were part of it will never forget the journey.