Hutton has 'no interest' in returning to senior management 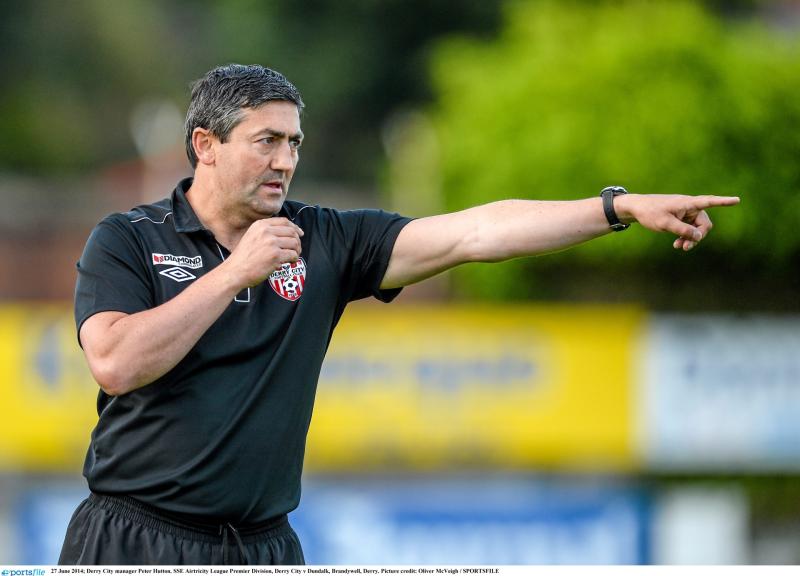 Peter Hutton has no interest in returning to senior management.

Throw in over 660 appearances, 55 goals, two caretaker manager spells and one full time manager spell, and it is easy to present the case for ‘Pizza’ being the club’s greatest ever servant.

But since losing his job as City manager in the autumn of 2015, the former captain and leader of the Candystripes has taken a step back from the game he spent his life playing and he feels all the better for it.

“I miss the actual football, the coaching and the playing of the game hence why I especially love going to the youth games because you can see the young players just playing for the sheer enjoyment of it. It reminds you what it should be about. It’s great seeing the smile on young players’ faces, that raw enthusiasm that takes you back to when you were doing it yourself. Football is there to be enjoyed and I suppose I lost that when managing Derry, it became a chore.’’

Taking over after Roddy Collins’ ill-fated 13-game spell in charge of Derry in 2014, Hutton oversaw a record-breaking Europa League victory over Aberystwyth, before leading City to an FAI Cup final, where they lost to St. Patrick’s Athletic.

In 2015, very little went to plan however, and with City struggling for goals and league points, a relegation fight became a reality and when Cork City ended FAI Cup hopes for that season, Hutton lost his job, after 66 games in charge.

That dismissal hurt Hutton, and speaking openly about that period for the first time, he admits he may have been naïve in his own management and expectation of others.

“It was a learning curve for sure,” he continues. “If anything, I was very naïve with some of the signings made. We didn’t replace the goals from the previous season and the budget was significantly cut given there was no European football, so we went with a young squad with the aim of maybe selling 1 or 2 of our young prospects.

“We lost Mickey Duffy the day before the season started as he signed for Celtic and Stephen Dooley had injured himself in the gym and was out for six months, not a great start to the upcoming season with two of our better players missing.

“Later in the season we brought in young Aaron Mc Eneff, Cormac Mc Cormack and Rob Cornwall on loan. I never thought we would be in trouble, I fully believed we now had enough quality in the squad to avoid a relegation scrap, even more so after we were eliminated from the cup as we had to chop and change the team for cup games given some players we had signed were already cup tied, we would now have a settled team and hopefully kick on.” 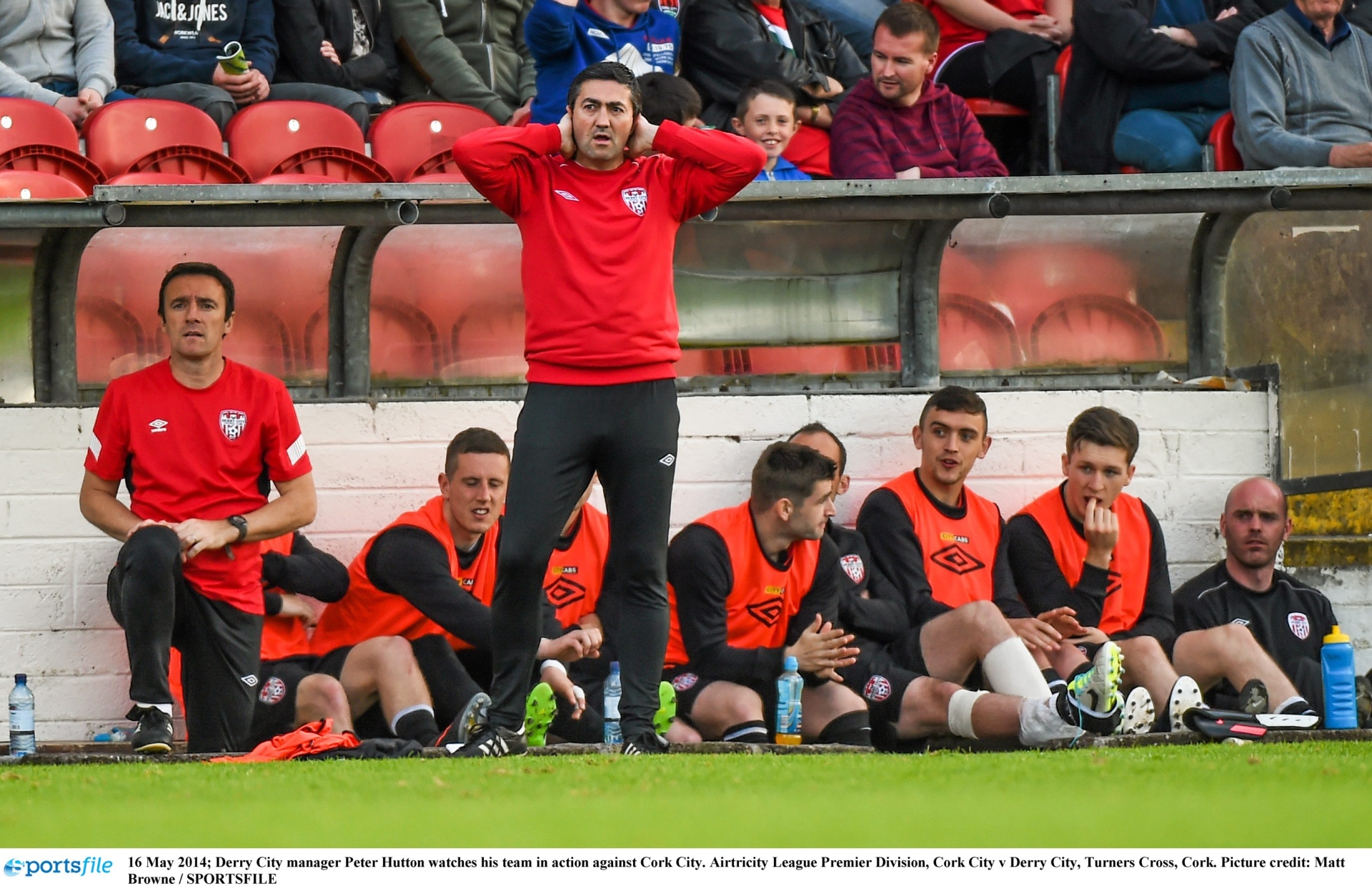 Whilst struggles in the league persisted, the FAI Cup run provided some comfort, victories over Edenderry and Drogheda United raising hopes of a second cup final inside 12 months. A draw with Cork City at the Brandywell meant a tough replay at Turners Cross, and so it proved as a 3-0 defeat on September 14 brought not only elimination, but the end of Hutton’s tenure as manager.

He was slightly surprised and hurt by the decision to relieve him of his position.

“Look it’s never nice to lose your job, especially in such a public setting but that’s football, it goes with the territory, and I understood this before getting involved. I knew results were not great but we already knew it was going to be a difficult season, ‘a transitional year’, as I was told by the board.”

Hutton believes he would have gotten Derry City out of relegation trouble, and points to his experience in successfully doing that role a number of times on the past as evidence. He stepped in as caretaker manager following the departure of Gavin Dykes in 2004 and again when Pat Fenlon lost his job in 2007.

“I always thought we would get enough points on the board to be alright. They said, ‘we’re in a relegation battle and we don’t know if you’re the man to get us out of it’, yet they had asked me to get them out of two relegation battles before when I was caretaker manager so surely then if anyone was equipped, it was myself having being in a similar position twice before.

‘’Look, that’s football, it’s all about opinions, and on this occasion my opinion didn’t count. I’ve no grudges, they decided to go a different direction and if anything it was probably a blessing’’. 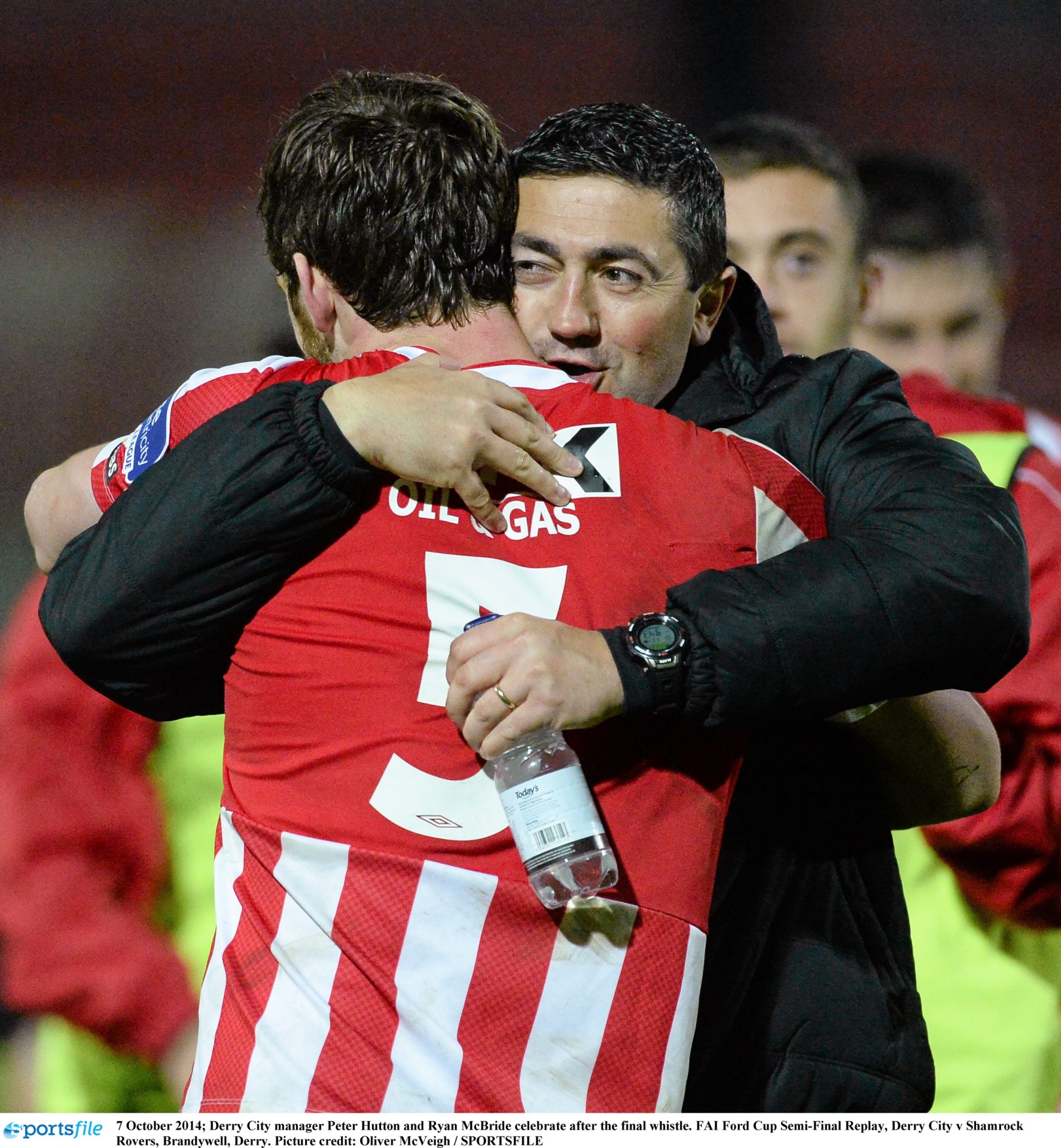 Hutton has since being involved in a scouting role for the Republic of Ireland underage teams up to the U21s and has enjoyed being involved in the game at youth level. In hindsight, he knows exactly what he would have done differently after finishing his playing career with Cliftonville and Finn Harps.

“I had left Derry initially and gone up to play with Cliftonville and was then thinking of a career outside of football,” he continues. “My biggest regret is not having taken a compete break away from football after playing. I have been involved in senior football from when I was a teenager of 16 or 17 years of age.

“I went from Derry to Cliftonville and I went straight from there to Finn Harps and straight from Finn Harps to Derry. If I had had a complete break away from football, I would have then seen what normal life was like and I probably wouldn’t have got involved in it to be quite honest. It’s only now when you have stepped away from it you realise how much it has impacted upon the rest of your life, both your own and your families’ lives’’.

“I naively went from one thing to another without giving it much thought. It is only when you step away from the game altogether that you realise it’s all consuming. It’s 24/ 7 and just takes over your life. It’s a tough job, particularly in your home town.”

Hutton has plenty of empathy for current manager Declan Devine, who, as well as the everyday pressures of the Derry City job, has had to carry out his role in the middle of a worldwide pandemic.

“It takes over your life,” he insists.

“The phone doesn’t stop and it definitely affects your home life. It’s not good. Football is there to be enjoyed, and if you’re not enjoying it what’s the point? Especially if it is having a detrimental effect on your young family, there’s no point, it defeats the purpose.’’

I can really sympathise with Decky for sure, especially with the direction the club are embarking on now.

‘’The club need to rediscover their identity once more, one the fans can equally identify with but that takes time and the blooding of future young players is a slow process and needs patience from all involved, especially, I would say, the fans and the board. If they believe that Decky is the man for them and believe in him then he should be given the time to implement his ideas. There will be good days and bad days along the way but during these bad days the young upcoming players will learn and become better, more experienced players from it. I feel a perfect example to look at is our North west neighbours Coleraine’’.

‘’A few years ago, results were not going great for Coleraine and Oran Kearney was under pressure, but they persevered, and they got their rewards. Oran went on to achieve great success with Coleraine and in the process, he brought through a lot of good, young local talent, but his employers had patience and knew it was not going to be an overnight turnaround.

“Whilst fans can be fickle many true Derry City fans will understand that if there is a long-term plan in place then more realistic expectations should be of Decky and his management team and accept more realistic goals going forward.’’ 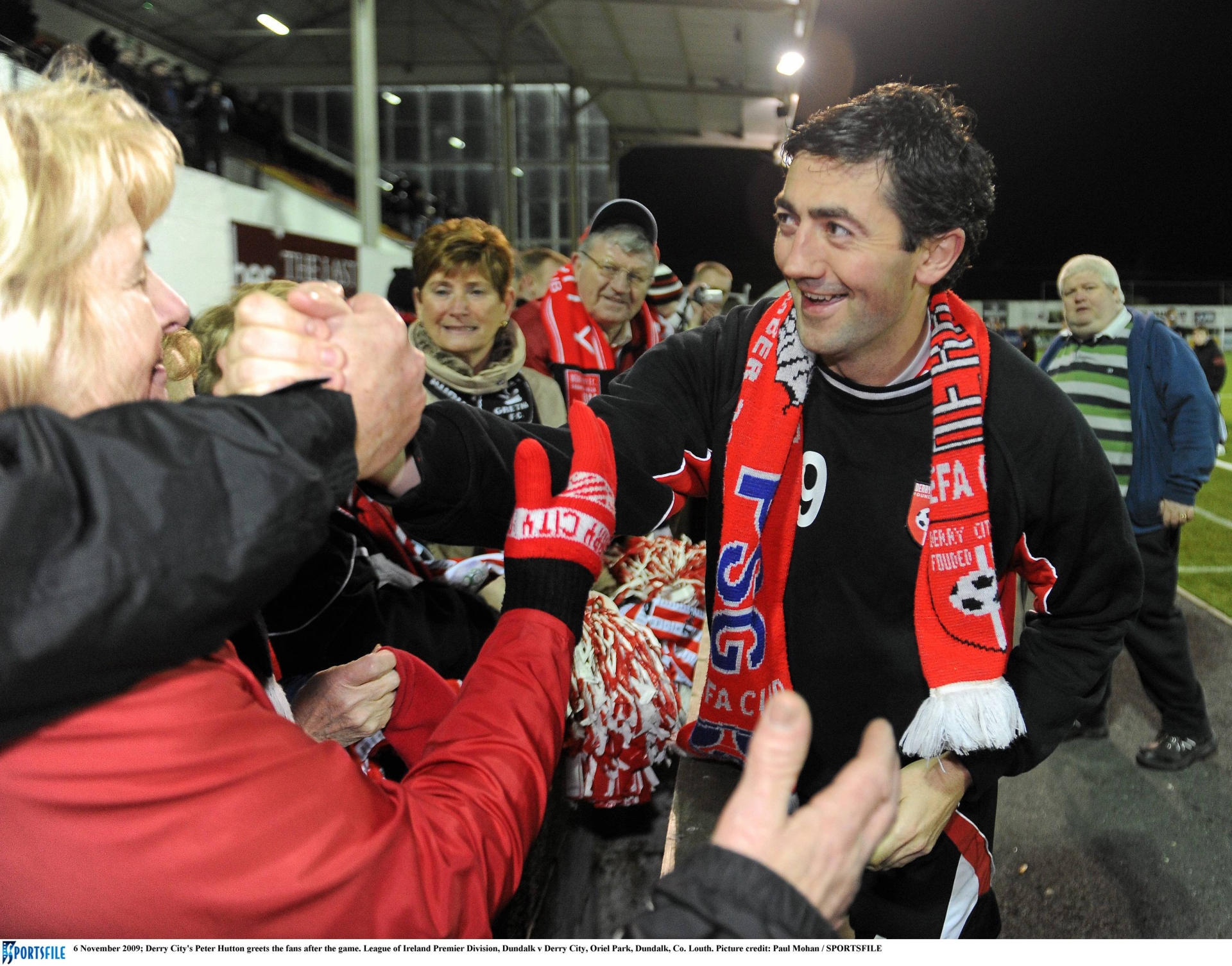 Hutton can look back on his entire career with a huge amount of pride. His record at Derry City will likely never be broken, while the memories of him as a fearless and brave captain can never be replaced. As for now though, Hutton is much happier away from the game, and is not planning a return any time soon.

‘’ I know everyone says, never say never but I doubt very much I would return to a senior set up. I would be more inclined to become involved with the youth,” he says.

“I would get more enjoyment from that and from giving something back to the game – but not in senior football. I wouldn’t be interested in managing a senior team, definitely not.”