'Shy' Conor hoping to inspire others in new documentary film

City of Derry Spartan the star of 'It Runs Deep', which will be unveiled later this year 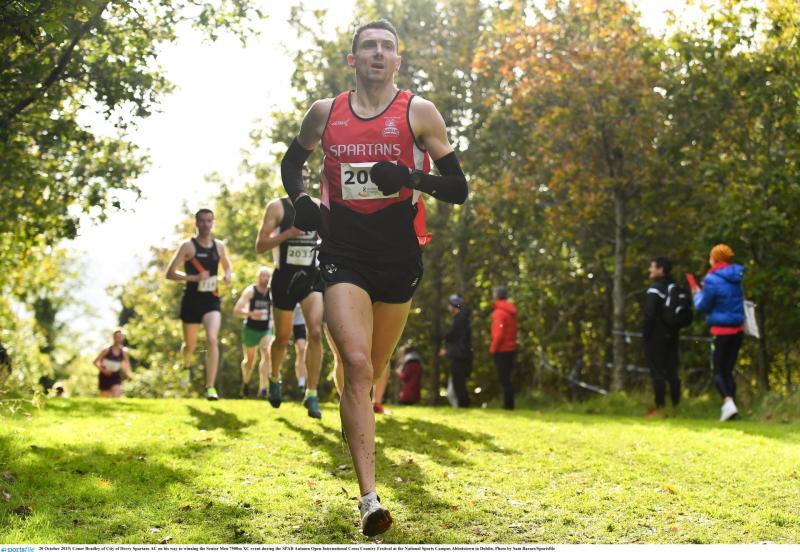 Being the star of a documentary is not something he ever expected, but Conor Bradley is now hoping to inspire others.
The City of Derry Spartan is admittedly shy and modest, but that has all changed in recent times as he has had a camera following his every move, at home and abroad for the upcoming documentary film 'It Runs Deep'.
Like us all, Conor hates hearing his own voice back, but he is looking at the bigger picture, and with local Director and Producer Eamon Kerrigan’s film highlighting just what it takes to become an elite athlete, as well as showcasing Derry in the process, the positives outweighed anything else.
“I was a bit hesitant because I’m a quiet and shy person so the thought of being in front of a camera was a bit daunting,” he admitted. “Eamon was good and helpful and made me feel at ease and advised me to go about my training as if he wasn’t there, and that’s what I did.
“It’s really nice to get a bit of exposure and exposure for running in general, and it’s good in the sense that it shows the hard work and effort it takes to get to an elite level in athletics.”
Bradley has a long, long list of achievements in athletics, stretching back to when he joined the Cross-Country team at St. Columb’s College when he was only 13 years old. Now 33, he just gets better and better. His achievement in last year’s Barcelona Half-Marathon, which he completed in a time of 65:35, was just one in a seemingly endless list for the local man, who is a regular figure for Ireland on the international stage.
‘It Runs Deep’ is not just about Conor’s achievements however, with the aim to promote the city itself as well as running throughout Ireland.
“That’s mainly what drew me to it, that it wasn’t going to be all about me,” Conor acknowledged. “It’s going to be about running in general and how that fits into people’s daily lives in Derry and in Ireland and hopefully it can inspire people to get active and to get out there and get exercising.
“It has been great to see how the team worked behind the scenes and the hard work and dedication they put in. The amount of time and effort that they put in to film and edit a short documentary is unbelievable.
“It is very, very strange hearing yourself talk and watching yourself on TV, but it’s great because the way he shot it, it’s not all about me and that suits me perfect.”

Challenging
The face of athletics has changed in the last year due to the coronavirus and Conor admits that it has been a challenging time keeping on top of his game with little in the way of competition to look forward to.
“It has changed definitely,” he agreed.
“In terms of motivation you always had that next race or next number of races to look forward and train towards. With so much uncertainty it’s been difficult to get out the door, but the way my coach and I have talked about it is you have to try and stay ready and fit because the opportunities will present themselves.
“It’s difficult enough training 7 days a week and 365 days a year but when you bring Covid on top of that, it brings another layer of challenges.
“It has been difficult but hopefully with these vaccinations, there is light at the end of the tunnel. It would be great to get all these local runs back again so we can get a wee bit of community spirit back again.”
The documentary will be released later this year, and whatever comes from it, Conor is just glad that he will have it for posterity in years to come.
“It’s amazing the amount of footage I’m going to have,” he said. “I can look back in 30 or 40 years and see the athlete that I was. Races from 10 years ago I wouldn’t have any footage of anymore, but now Eamon has footage from the last 18 months which is excellent.”