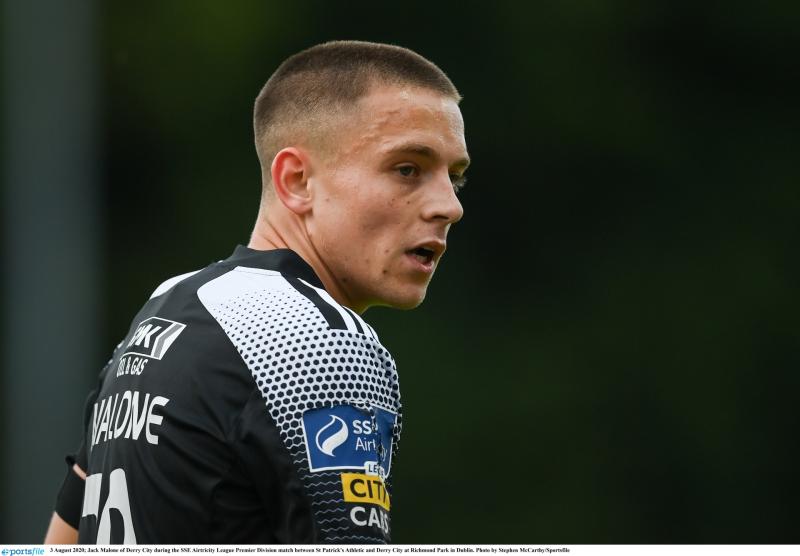 Jack Malone is optimistic ahead of a new season.

Jack Malone is refreshed and looking forward to a brand new season with Derry City after taking what he believes was a necessary break from football.
The 20-year old is readying himself for his third season with the first team in 2021, and hoping to significantly add to the 30 appearances he has made for the club so far.
Yesterday, it was confirmed that the 2021 SSE Airtricity season will begin on Friday, March 19, and with Derry City set to begin pre-season training at the start of February, it appears to be full steam ahead towards a new campaign.
That is a huge relief for Malone and his team mates who endured a tumultuous 2020 season, with a five month Covid-19 induced break followed by two outbreaks of the virus at the Brandywell which saw the players stretched to capacity to fulfill fixtures by the end of the season. Results and performances were reflected in poor results and the season ended with a whimper with a penalty shoot-out defeat to Sligo Rovers in the FAI Cup quarterfinals.
It was a lot to take for the players, all things considered.
“It took its toll mentally more than anything,” Malone admitted.
“I was buzzing to actually get a break from football, and that's not like me. It's probably the first time I actually haven't thought of football in a few years. I just didn't want to think about it for a few weeks, I just wanted to go recharge the batteries and look back on what happened individually and as a team.
“It was important to just switch off completely from football for two weeks maybe, and resting the body and the mind more importantly. After that it was just getting back into training at the gym and doing a load of runs; we have got our own programme now to follow for the next few weeks leading into pre-season, so we'll all be in good shape when we go back. I'm really looking forward to getting going this year and hopefully we can get the fans back in as well.”

Middle man
Malone made 19 appearances for the first team last season, but was played out of position on several occasions due to circumstances and necessity. He is hoping that changes this time around.
“Last year I thought was difficult,” he said.
“I'm a central midfielder but I was playing right-midfield or right-back and sort of doing a job for the team which some other lads might not have done. Hopefully I can get a good crack at central midfield this year. No matter where I'm playing, I'm happy to help the team. It's a big year for me and a big year for the club.
“Playing those different positions is only going to benefit me in the future. I'm still only 20 so I'm happy to play anywhere, and wherever the manager wants me to play I'll play. It'll benefit me in the long run but hopefully this year I can get a good crack at central midfield and show everyone what I know I'm capable of.”
2020 is now behind everyone at the club and Malone is hoping that the club's supporters have much more reason to be optimistic going forward.
“We have to have an identity this year and a style of play that our fans can relate to, so that we know what we're doing week in and week out,” he explained.
“Obviously our aim this year has to be Europe and a cup run. Last year we put a bit to much pressure on ourselves and there was a lot of expectation coming off a good first season under Decky. I'm sure we'll sit down in pre-season and discuss our aims and take it from there.”

Grateful
Malone is also grateful to former coaches Kevin Deery and Martin McCann, who have both left the Brandywell in recent weeks. It means a new coaching set up at the club this year and whilst nothing has yet been announced, Malone will always be grateful for his time with both former players.
“I would like to say a big thank you to Kevin and Marty,” he stated. “Since the day I walked in the door, they have been class to me and as a young local lad that's exactly what you want.
Kevin Deery is someone I look up to and hopefully I can base my style of play on him. They will both be missed of course. Things happen for one reason or another but we just hope to be all pulling in the same direction this year and I hope we are.”