'He was a titan of Derry City'

Tributes for Hugh McMonagle after his recent passing 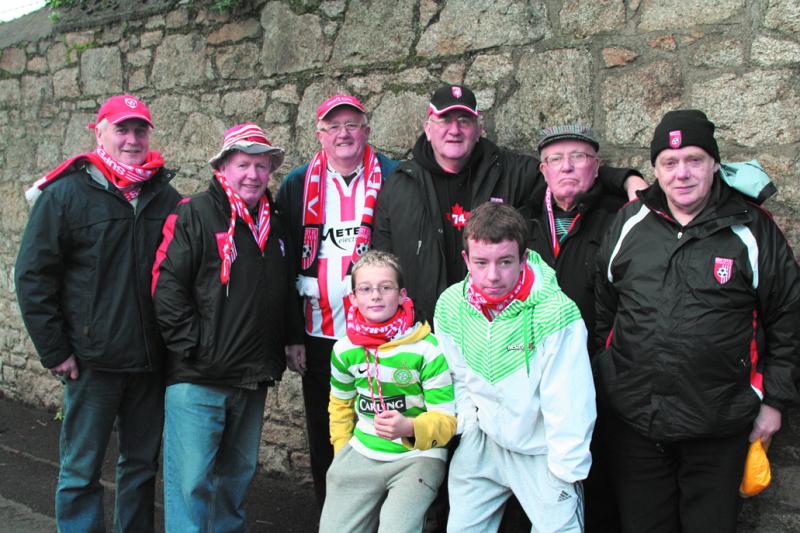 'A man who brought people together without even realising it, stories of Hugh McMonagle will be told for weeks, months and years to come, such was the huge character of the man'.
That was just one of many tributes paid to Hugh McMonagle over the weekend as the Derry City family came to terms with yet another loss, the second in just a matter of days. A man who epitomized what community meant, Hugh was known to everyone who followed Derry City home and away, and everyone has a story.
Following the Candystripes on the road is not just about following the team, it is about creating memories, forging friendships and living life the way it was meant to be lived – surrounded by those who support us, motivate us, and give us a good laugh.
Hugh was all of those things, and for those who knew him best, his loss is a sore one.
A co-founder of Pride of Northside Supporters’ Club, Hugh could often be found behind the wheel, giving advice, offering opinions or making the passengers roar with laughter. His loss is being keenly felt by those who travelled with him.
Pride of Northside emerged from the now defunct Marian Hall Supporter’s Club which had originally formed in 1985 and is now the oldest surviving supporters club.
Chairman Michael Kerrigan, a close friend of Hugh, has a lifetime of memories with a very dear friend.
“It’s hard to pick out memories because they are all unique in their own ways,” he said.
“There are so many it’s hard to hit on just one. We went to cup finals, we went to Cardiff even though we were whacked over there, and there was the 4-0 win over Dundalk to win the League Cup on the way to the treble. Those were good times.
“I would have known him away back. I would have followed Derry in the fifties and sixties. Hugh wouldn’t have been an avid follower in those days and he would be the first to admit it, but he was just so, so engrossed in the fortunes of Derry City. His house was full of regalia, and he was always getting scarves knitted for people.
“He was just a one-off. I’ll tell you what, he was just a titan when it comes to Derry City. He would criticize as well, because he was one of these boys who would call a spade a shovel. He fired from the hip at times and he was very witty. He could shout and roar but he didn’t like anyone going over the top with the criticism. He had many contradictions as well, because it was alright for him to criticize, but don’t you be criticizing.”
Northside were and remain a close bunch and it wasn’t just Derry City that brought them together, but trips away which in themselves brings a smile to Michael’s face.
“The highlights were the holidays,” he said.
“We went a lot of places, including West Cork, and we were laughing at the things we got up to, the craft village where they made potchin, and the vintage cars outside. It was great, great craic and he laughed his head off. There are wonderful photos of that. We all enjoyed ourselves when we were away.”
2020 has been a grim one for football fans, but as a horrible year comes to an end, the memories of Hugh will remain. Pride of Northside will ensure of that.
“He was a very kind and thoughtful person,” Michael added. “He was very good to his wife and very good to me the time my own wife was sick. He went out of his way to do things for people and particularly with young ones. He loved working with young people and they would have called him their mentor. He was a good educator in that way, giving out advice.
“He was so thoughtful and just a kind man. He could be explosive too but his heart was always in the right place.  He was always thinking ahead thinking we might need this or we might need that, be it cleaning the bus to have it ready for the next match, or whatever it was. He too it all in his stride, He was just a doer. He always had to be doing things.
“If you went up to the cemetery on a Sunday morning, he would be cutting his friends’ grass or his family’s grass. He just did it off his own bat.
“He was just an infectious person and everyone wanted to be in his company. I knew him for a long time, but we were particularly close the last 35 years, particularly working in the Parish Hall with the Parish savings, and in working in the pantomimes. He was so witty as well. He would call the bingo and the abuse he used to give out was fierce. He was a great, great character.
“We’re certainly going to miss him. He’ll be a big loss to us. He was just a colossus. He had a great presence about him. He lightened the place up all the time. You would have heard him shouting to you from the end of the street. These are all big memories.”