Derry man wins FAI Cup on Sunday past, now faces the Gunners at the Aviva 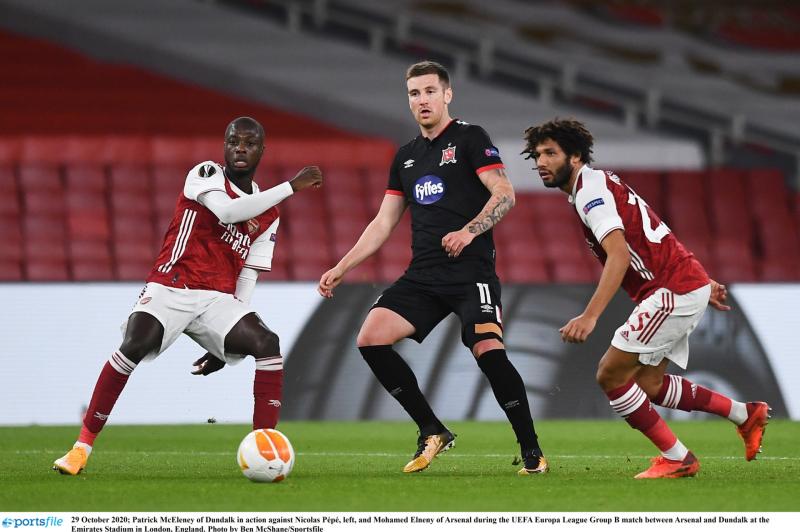 Patrick McEleney in action against Arsenal at the Emirates

Patrick McEleney is hoping to end another memorable season with Dundalk on a high against Arsenal this evening.

Dundalk will finish out their Europa League campaign against the Gunners on the back of a memorable FAI Cup win against Shamrock Rovers on Sunday past.

Sunday's FAI Cup win has taken the number of major trophies to 9 for McEleney who is quickly becoming one of the most successful footballers to ever come from Derry.

It was the 6th final in a row for Dundalk and much more entertaining than recent years with McEleney and his team mates coming from behind to beat Shamrock Rovers in extra time courtesy of a hat trick from David McMillan. It was a final which McEleney will never forget.

“I think most of the previous finals were against Cork, which was mostly them cancelling out what we were doing,” he reflected. “I knew going into this one that it would be a good game, and luckily we just came out the right side.
“It wasn't ideal that we conceded first, then get ourselves back into t and then concede straight away again. Only for the set pieces we had won the game, but it's been our Achilles Hell recently.
“It's not really like us to go and concede a run of goals like that, we're the complete opposite to be honest.
“Credit to us though because I think we one of the only teams to do what we did in the final, to go behind and go ahead and then suffer the disappointment but then to still go on and won it.”

McEleney caused a bit of a stir prior to the cup final by stating in an interview that champions Shamrock Rovers were still years behind Dundalk.
Rovers may have used that as ammunition to fire themselves up for the final, but McEleney insists he meant no disrepect.
“In the previous interviews it wasn't me having a dig,” he clarified.
“That's generally what I believe and I'm sure that anyone who understands football would understand that. I think we're six years into our process and they're only a year or two into theirs. We win every year and we have been doing that for years and I still think Rovers have to catch us on that. It wasn't me having a swipe, it was more the facts of it.”

Hitting back
That noise from the media irked McEleney somewhat, especially after Dundalk have dominated domestically for so long now. The switch of attention to Rovers all of a sudden, whilst minimising Dundalk's own achievements, did not sit easy for the 28-year old.

“It's just expected, and that's where we've gotten to,” he said.
“People just expect us to go and win things, we should be beating Molde, and we should be beating Rapid Vienna, but we've no right to, to be honest. We work hard to get there and the expectancy is crazy about Europe.
“Even when  we won the play-off people were saying things like 'Aww, they only beat a team from the Faroe Islands'. It's never good enough, but for other teams in other cases it's good enough. But it drives us forward. I wouldn't lie and say it's not a motivator, because it is.
“You can never please everyone. Even when you win games, it's still not good enough, but I suppose we've earned that, we've done that ourselves and it just comes with the territory, but I think people need to start respecting us a bit more.”

Arsenal tonight
Dundalk will face Arsenal tonight, which in itself is a massive tie for any League of Ireland club. Even though Dundalk have not fared as well as they would have liked in the Group Stages, they are still facing a world famous team in Dublin, and that should not be forgotten.

“It's a mad one but it's a great way to finish the season at home to Arsenal in the Aviva,” he added. “It's just a pity we can't have fans because the stadium would have been full. Then again, I suppose everyone will be expecting us to beat Arsenal now. It's a good game and something to look forward to.  All in all, after winning the cup, we can say it's been a successful year.”

On a personal note, McEleney is relieved that the groin injury which threatened to end his season was not as bad as first feared, which would have deprived him of some terrific moments in these past few weeks, with more possibly to come this evening.
“I got back really quickly, a few weeks earlier than I expected for the magnitude of the injury,” he admits.
“I was delighted to get back, and rushing back for a couple of Europa League games and a cup final is not  a bad thing because I had something to shoot for and I worked really hard for it.”