Memories are the real trophies for incredible Jobby

'The Man they Couldn't Ban: The John Crossan story' to be released this week 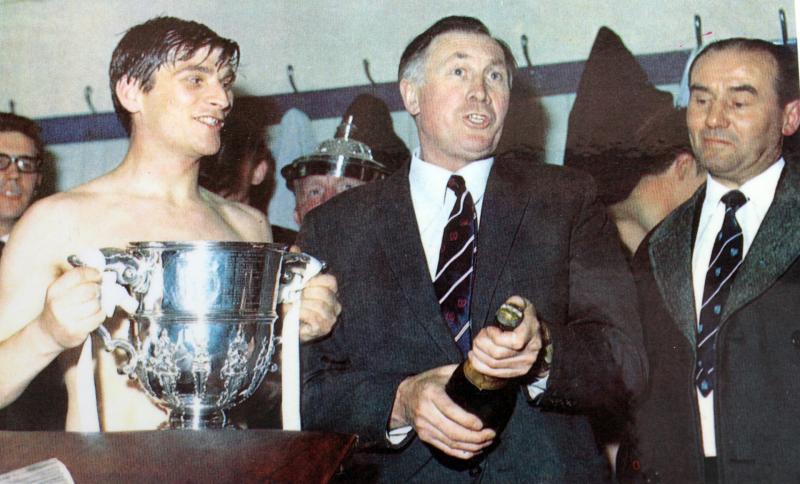 The recent death of Diego Maradona has football fans across the city arguing over just who was the best ever, but there is one man who in this town who is perhaps more informed than most on the subject, having played with a who’s who of the most spectacular footballers ever to grace the game.

The shutters are more often down on a small shop on the Racecourse Road, a blink and you’ll miss it establishment somewhere between an accountant’s and a dry cleaners.

Every day young footballers pass by that small shop of trophies and medals completely unaware that inside, behind the counter or at the back of the shop beside his heater is a local man who has some truly incredible tales to tell.

Jobby Crossan is always there, and be it Bobby Ross or Donal Ferry or any number of passers by, the world is put to rights by those who remembered how things were in the ‘Good Old Days’. There was no VAR, there was no social media, there was no click bait press.

Jobby’s story – The Man they Couldn’t Ban’, written by Richie Kelly and published by Colmcille Press, will be released this week, and tells the story of a man who has played alongside the likes of George Best, Pele, Alfredo Di Stéfano and Ferenc Puskás. It is a story of determination, luck, talent and belief, and it is a jaw-dropping story that few fiction writers could muster.

So, Jobby, who was the best?

“I agree with everything they say about Maradona,” he said.

“George Best may not have been as good as him but by God, he played in a different league and George was phenomenal. Then you had Pele and it was a toss-up between him and Maradona. They were all super players and to single any out is a wee bit unfair.

“George Best on his day was phenomenal. I travelled with Best when we played for Ireland – I was City and he was United. They were all brilliant those guys. Maradona was something exceptional. It’s trying to decide who was better - Cassius Clay or Joe Lewis? It’s very difficult but I would have fancied playing with any of them.”

Who Jobby has played with is a long list featuring some of the biggest names you can imagine. But it was all brought about by a lifetime ban from football in 1959, a defining moment in his life, which, he now agrees was a blessing in disguise.

“I’m thrilled with what happened,” he reflects.

“The ban was unbelievable but I always take it back to the football, because if you’re successful those things don’t matter.

“There is the story about being banned and thrown out of football, but I just wanted to play football. It was really difficult when I first went out foreign. I had loved playing for Derry, but some of the stories emanating from my transfer were beyond belief. Football was everything because we had nothing ese to do in our part of the world.

“It was football on the tarmac, or the main road, then football in the Daisyfield or the Showgrounds. We were all real Derry City supporters and from no age I was behind the goal retrieving the ball. Football was everything.”

“I picked up the Dutch language every quickly, then we had Hungarian and then French friends. They were learning to speak English as well to accommodate me. The teams we were playing in were successful and that’s a great help. We weren’t playing top of the table stuff all the time but I was very lucky, plus the fact that I obviously had a bit of ability as well.”

Alfredo Di Stéfano was the star player for a Real Madrid side that dominated world football in the 1950s and 1960s. He scored in five consecutive European Cup finals from 1956-1960 and is viewed as the greatest player in the club’s history. Rubbing shoulders with such royalty was nothing new to Jobby.

“I wasn’t a bad old player. I was lucky but you put that down to having a wee bit of ability as well and you mix the two together. Playing with those guys, I realized how far behind I was from those guys,” he laughed.

“They were exceptional players and too good at times for us. What I found out about those guys was that they were all decent sort of guys. I remember having a cigarette and Di Stefano, Puskas and Gento were there. There I was in the middle of it at 20 or 21.

“I was sitting on the bench for my first match at Liege and sitting on the other bench was Pele. We were playing Santos in a friendly on a Wednesday night and I was coming home on the Friday. The on the Friday night we played a team called Botafogo and a boy called Garrincha played. These boys were all household names.

“Going out foreign initially was tough but when I got out and things were going well then everything else fell into place. It was easy then.”

Jobby returned from the Continent to play in England where he played for Sunderland whom he won promotion with and Manchester City, who he captained to the Old Second Division title. An already fascinating story had more chapters to be written.

“I had a great feeling for Aston Villa at one time when I was young and I had no hesitation going to England,” he said.

“Sunderland were one of the teams who wanted me back in 1957/58 but that whole thing fell through. I was then suspended in the British Isles and that allowed me to go out foreign after some heavy work from people on my side. They were just going to ban me.

“I captained most of the teams I was with. I think that’s because I would defend my own players with the hierarchy at the clubs if anything happened. Some times a manager would criticise a player and that would be all wrong because he wouldn’t criticize the boy he paid a lot of money for. I thoroughly enjoyed all that. Playing on the continent was great.”

Jobby also won 24 caps with Northern Ireland and played at Wembley against England, a special memory for more than once reason.

“I played for Ireland ‘B’ against the French in Belfast,” he recalled.

“I played well and by the time I got home that night, the journalists were outside my door. They were waiting on me coming because the IFA had announced that I would be playing the following Wednesday at Wembley against England, and that was my ma’s birthday. I was delighted. My ma had a sister in Brighton and she flew over and she went to the match and I think that was the only match she was ever at.”

Not that Jobby ever needed any validation – his CV was enough to impress anyone in the game, but there is one story that Jobby relishes telling to this day, and is one of many ‘wow’ moments in ‘The Man They Couldn’t Ban’.

“I had nights out with wonderful players,” he begins. “The night after we played Real at home, Puskas and De Stefano were at the table with us and we had a good drink. I happened to be lucky I was in that company.

“There was also a famous night, which Richie is using in the book – we were at the Football Writer’s Dinner, that used to be the two cup final teams on the Thursday night. The Mirror and the Express paid for it and it was on Oxford Street in London. I was the captain of Man. City at the time and it was there they picked the ‘Player of the Year’.

“We were in the Café Royal with George Mulhall who played for Scotland. I said to him ‘There’s Di Stefano at the top of the stairs’. It was a big wide staircase. I told him he wouldn’t remember me. We were walking up the stairs and he was walking down and what does he do? He puts his hand across to me and says ‘Standard Liege’. If he comes over to shake hands with me, I must have done alright. “

Jobby turned 82 on Sunday past, and what better way to celebrate than launching the story of Derry’s most successful footballer, so that those who don’t understand can finally learn about ‘the man who owns the trophy shop on the Racecourse Road’.

“I’m glad I did the book,” he admits. “It could have been done years ago, but now I can say to the grandson to go and buy that book about his granda.”

'The Man They Couldn't Ban: The John Crossan Story', will be published by Colmcille Press and will be in local book stores at the end of the week.