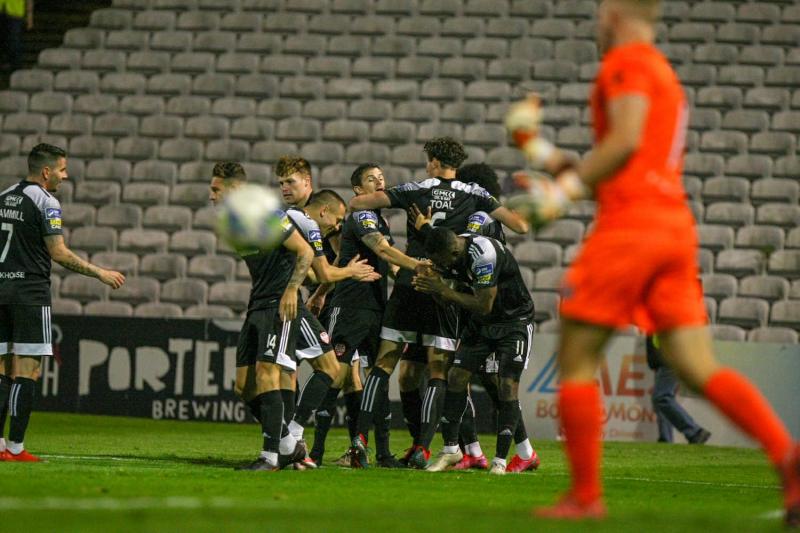 It all started so well for Derry City at Bohemians with James Akintunde's goal. Pic by Kevin Moore

Derry City conceded two goals in stoppage time as they threw away three points in a dramatic finale at Dalymount Park.

City led from the second minute thanks to James Akintunde’s fine finish and it looked as if they would hold on, until the very end.

Keith Ward equalised from the penalty spot and with City still upset over that decision, they fell to a Andre Wright strike with virtually the last kick of the game.

After successive goalless draws, City got off to an attacking start, and they caught Bohs completely cold after just two minutes. Keith Buckley lost the ball in his own half and Walter Figueira took it forward, approaching the penalty area before sliding a through ball into the path of James Akintunde, who calmly lifted the ball over the advancing James Talbot, the ball striking the underside of the crossbar on its way into the net.

It was a confident start from Derry with that goal lifting the shackles, and they came so close to doubling their lead on 13 minutes. Cameron McJannett spread a brilliant ball out wide on the eft to Figueira, who let Akintunde take charge. The goal scorer, no doubt buoyed by his goal, raced past Andy Lyons and into the penalty area, before trying to find Adam Hammill with the pull back, but his team mate was unable to connect with the ball from close rage and Bohs were off the hook.

Dawson Devoy has been making a name for himself this season at Dalymount and he almost brought his team level with a spectacular individual effort, when he sidestepped Conor McCormack and Jake Dunwoody before attempting a curling effort which had Cherrie beaten all ends up, the goalkeeper glad that the ball sailed just past his upright.

Akintunde, just back on the pitch from a knock to the face, looked to end the half the way he started it as he raced into the penalty area from the right, and with no challenge incoming, he tried an audacious curl around Talbot, but his effort was wide of the target. Nonetheless, it was a satisfactory first half for Declan Devine and his players, who were worth their lead at the break.

Derry thought they had a second goal on 74 minutes when Hammill’s corner into the heart of the penalty area saw Talbot stranded and Toal got the header in only for Tierney to clear the ball off the line. The City players appealed vehemently that the ball had crossed the line but referee Connolly said no.

That proved decisive e as in added time Jake Dunwoody challenged Tierney who went to ground, and referee Connolly immediately pointed to the spot. Keuth Ward duly clipped in the equalizer.

With City still stunned by that, Bohs then won a free kick and a goalmouth scramble saw  turn the ball in from close range to the dismay of the Candystripes, who had no time to reply.