Anyone for tennis? Lovers of the game in Derry delighted to back out on the courts

Local club sets up at the new Foyle College 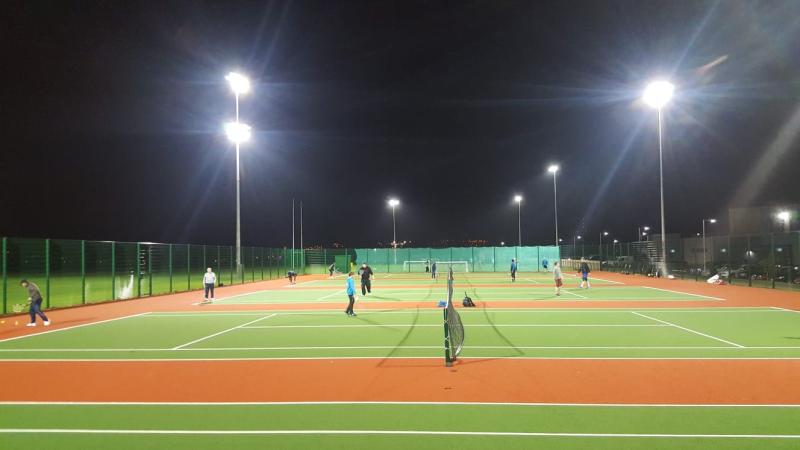 The tennis courts at Foyle College.

Derry's tennis scene has been one of the few winners of  the coronavirus crisis, with matches at the city's only tennis club getting snapped up minutes after they go online.

City of Derry Tennis Club, which formerly met at St Columb's Park, has been based at the new Foyle College on the Limavady Road for the past three seasons, where there are five state of the art astroturf courts.

Matches have been permitted since May 13, when tennis joined fishing and golf as the three sports permitted by the Northern Ireland Executive.

However, a lot of ground work had to take place to allow members back on court.

"We were delighted to get back to playing," said Peter Fryer of City of Derry Tennis Club.

"It was a bit daunting at first.

"Pre Covid-19 people could turn up and play maybe 20 different players during a three hour period and now it's completely different."

Under the new regulations implemented at the club players can book in for a one hour match against one other person, with  slots available on each court from 1pm to 5pm on Saturdays.

"The slots go up at lunch time on a Sunday and an hour later they are all gone," said Mr Fryer.

"Each player uses their own tennis balls with their name marked on them and the other player won't pick them up.

"The payment is taken online and there are entry and exit points so the 10 people who are playing at one time exit the courts without coming into contact with the next 10 players who are entering.

"We also ask players to bring their own hand sanitiser and not to touch the nets."

Mr Fryer said the club has welcomed new members since it has been permitted to meet again and is enjoying the surge in popularity.

"We are so busy but that's a good problem to have," he said.

"It's a shame, because that social element is gone but we do have a club WhatsApp group where new members can introduce themselves and find someone to play against."

However, despite the up turn in demand Derry City and Strabane District Council's six courts at St Columb's Park and its courts at Clooney Park West remain closed to the public.

"It's a shame that they are closed because tennis is a great sport that's usually very accessible to people," said Mr Fryer.

"You can get out and do some physical activity in the fresh air and hitting a tennis ball is a great stress reliever."

A spokesperson for DCSDC said all Council owned play parks, pitches and sports pavilions remain closed at the moment.

"Council is currently reviewing the NI Executive advice regarding the possible reopening of outdoor sports courts," said the spokesperson.

If you would like more information on the club see the City of Derry Tennis Club page on Facebook.