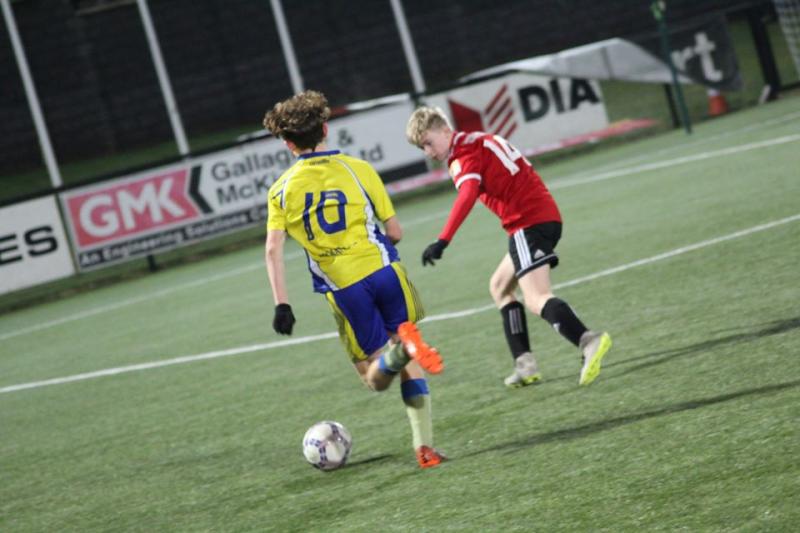 Trojans defeated Portadown at the weekend.

Trojans kicked the game off knowing that a win over The Ports was instrumental to their progression in the competition which they have trained hard for over the past few months.
Portadown dominated possession in the first half with Trojans struggling to keep up. The Ports took the lead a few minutes before half-time
Trojans returned to the playing field in the second half knowing the weight that was on their shoulders. The boys from Oakland Park began as they should have done at the start of the game – dominating possession across the field of play.
The game was well and truly on when Ben Canning broke on the right wing to distribute a superb pass to Ben Whoriskey who had no trouble netting it to level the game.
The Trojan men continued to fight against the relentless Portadown and had several opportunities at goal through Ryan McLaughlin and Robbie Conway. The Portadown Goalkeeper embraced Trojans’ efforts with several magnificent saves.
On the approach to the final twenty minutes, Ben Canning encroached the 18-yard box and with the display of lovely footwork, tip-toed around two Portadown defenders before lobbing the ball over the advancing Portadown goalkeeper in a ‘Rabona’ style chip. Diego Maradonna would be proud.
Trojans took this opportunity to continue their aggressive attacking play - keeping the boys from Shamrock Park at bay.
Trojans furthered their lead in the final few minutes when Oisin Ferry-Bradley laid off Cormac Kelly who from 12-yards made no mistake; securing a win for the Creggan boys.
A fantastic result for Trojans U15 Squad who made the journey to Dungannon for this fixture.
Trojans now progress to the Quarter Final of the NIBFA U15 Plate with a home tie against Bangor F.C. Date to be confirmed.