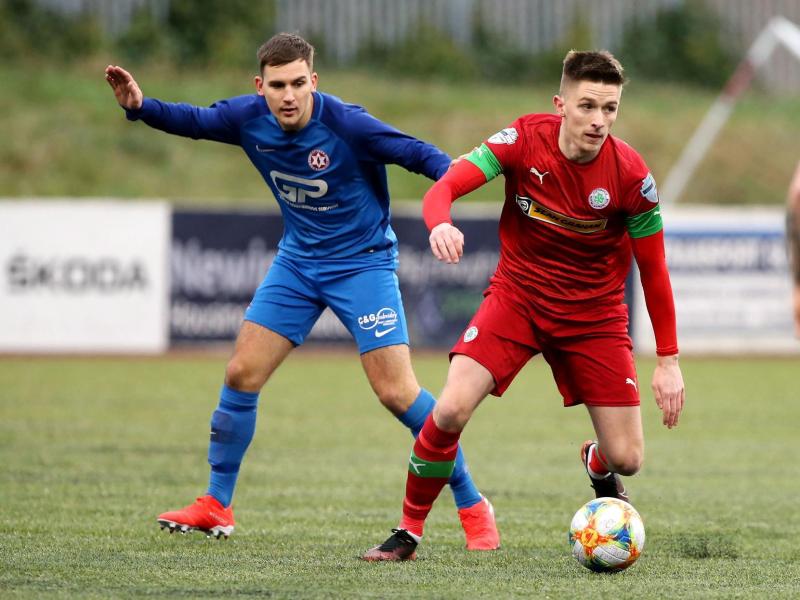 Ryan Curran has made a name for himself in the Irish League since leaving Derry City.

Ryan Curran believes Institute's plight at the bottom of the Premier Division could make them a more dangerous proposition when the teams meet at the Brandywell on Saturday. (Kick off 3pm)
With the split just weeks away, 'Stute are in desperate need at the foot of the table having picked up just 3 points from the last 13 league games. Despite that bleak run of form, they remain just three points behind Warrenpoint, giving them some hope of escaping relegation. That could well make them a more difficult opponent than the table suggests according to Curran.
“They are bottom of the league but that can be when teams are dangerous because they need the points badly,” he explained.
“We just hit a wee run of form and we'll be keen to keep that going. Also, with so many Derry players going back to the Brandywell, going out and embarrassing ourselves is not something we want to do, especially on your doorstep so you want to give a good account of yourself.
We have played Institute twice this year and although we beat them comfortably at the Brandywell, we only beat them 1-0 at Solitude and it was a tight enough game to be honest.”
This season could yet be a memorable one for Cliftonville, who are in the semi-finals of the Irish Cup, and pushing hard for European qualification under former 'Stute boss Paddy McLaughlin. Curran has been in flying form since joining The Reds, just like the manager himself.
“Since Paddy came in just over a year ago, he's hit the ground running, and so have the rest of the coaching staff,” Curran agreed.
“We all have a good bond off the pitch and I think you can see that reflected on the pitch because there is a good togetherness. Paddy has implemented a way of playing. We have conceded a lot less goals this year compared to previous seasons. We have put a big emphasis on keeping the ball out of the net and I think we have enough good players going forward to score goals.”

Derry City days
Curran is no stranger to the Brandywell having spent the first part of his career at the club. Since then he has made a name for himself in the Irish League with both Ballinamallard and Cliftonville, getting the regular football and game time that largely escaped him with his home town club.
“It has worked out well for me moving to Belfast,” he stated.
“I went to Ballinamallard first but I was always looking to get to Belfast and settling there. “I had finished my degree then I was to move to Belfast for a job so I was never going to stay in the League of Ireland or stay with Derry or Finn Harps. I was always moving to the Irish League because it was part time and you train in the evenings. It suits perfectly living here.”
“I was at Derry for five seasons I think and made a few short of 100 appearances but I'd say 60-70% of them were off the bench. It was hard to get a run of games and there was always people ahead so it was probably the right thing to do, even moving to Finn Harps the year before I moved to Belfast because it helped my establish myself as a first team player.”

Transformation
The Brandywell Stadium has undergone a significant transformation since Curran played for Derry City, and he believes the new look arena could make the club more attractive to players going forward.
“It has come on massively,” he agreed. “When I played there, the pitch was in good condition, even with the slope, but the changing rooms weren't great. It's come on massively with the stand being built, and the pitch is perfect now and they have moved it closer to the fans, and that creates a great atmosphere. It's something Derry needed.
“You think of all the great Derry players who have moved on, but putting this infrastructure in place will help keep players there, and the pitch and the stadium is probably the best way to go about that.”