Derry Ladies into final after victory over Queens 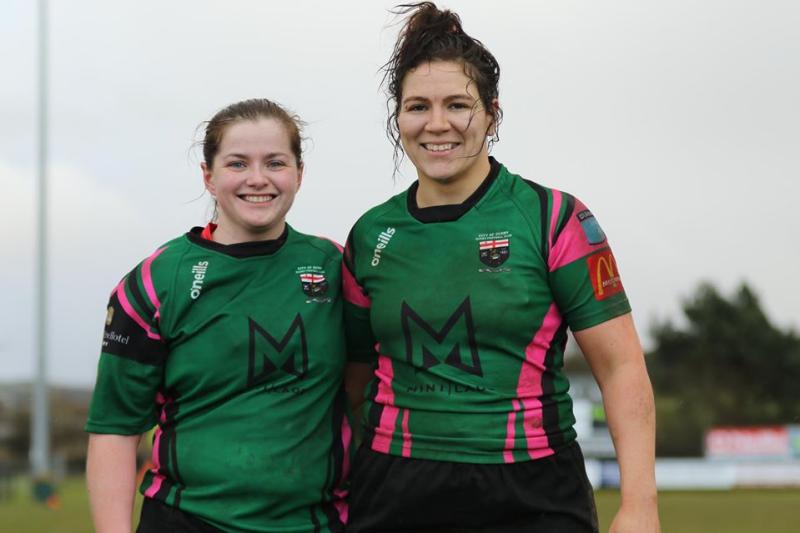 City of Derry Ladies will face Omagh at the Kingspan Stadium in the Deloitte Junior Cup final after a brilliant win over Queens at Judges Road.
Following the first girls rugby blitz held at City of Derry, the senior ladies became the focal point of the afternoon as they took on Queens in the semi-final of the Junior Cup.
Derry knew they were in for a tough game with Queen’s currently top of the league and having won in the first meeting between the teams this season.
Coach Beth Cregan picked a strong squad and the atmosphere leading up to the match was extremely positive, with the team knowing that if they went out and performed they were in with a good chance of getting to the final at the Kingspan Stadium.
This attitude was clear from kick off with Derry applying pressure straight from the whistle.
The forwards were providing a platform for the backs with strong carries and big hits. It wasn’t long until centre Stacey Sloan broke through a number of tackles and opened the scoring.
Queen’s were finding it difficult to break through the determined Derry defensive line and following a kick which was confidently taken by full back Ruagin Doherty, Derry attacked again. More confident carries from the pack allowed Ruagin Doherty to score in the corner.
This proved to be the final score of the half and indeed the game with the two teams cancelling each other out and Derry not letting the loss of Stacey Sloan to a yellow card disrupt their defence.
The pack were dominant in defence and in set plays and the backs showed their skills in both attack and defence. Despite the, at times, horrendous conditions, Derry never stopped fighting and are rewarded with a trip to the Kingspan Stadium to play north west rivals, Omagh in the final of the Deloitte Junior Cup on Saturday 4th April.
Many thanks to match ball sponsor Local Woman Magazine and player of the match sponsor Consult HR. Sponsorship opportunities are available for the final, please contact the club if interested.
Ticket details and transport options for the final will be announced as soon as they become available.