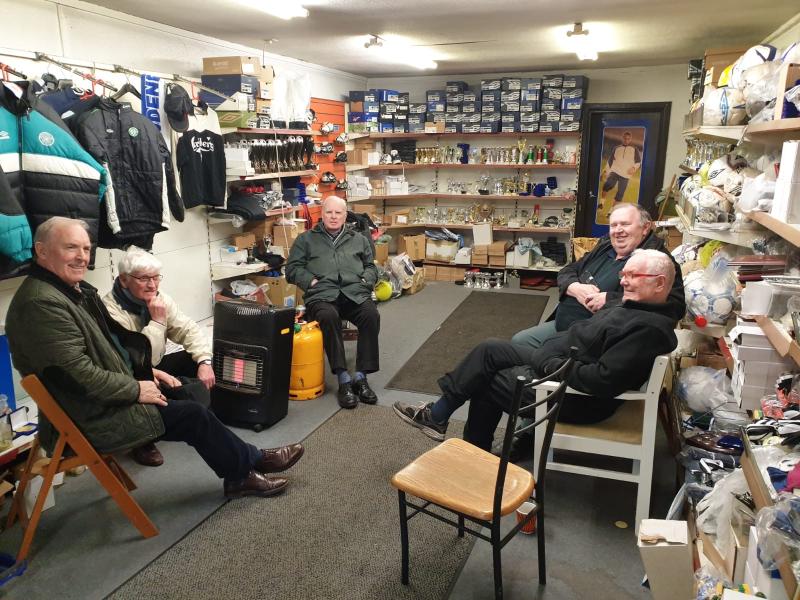 Put the kettle on again, Jobby: John ‘Jobby’ Crossan, left, sitting around a gas heater in his sports shop with long-time friends.

His career is the stuff of legend, but this is not another story about the football exploits of John ‘Jobby’ Crossan. At 82, the long-time proprietor of a Pennyburn sports shop is a life-affirming example to others of how to live a meaningful life after sporting retirement, thanks to the enduring power of friendship.

He pulls up the metal shutters of the shop and fights with the key as it struggles to unlock the door.
It’s a short trip from home to his premises in Pennyburn but it’s a well-trodden path for a man now in his 80s.
With a local paper snuggly secured under his armpit he’s made this journey in rain, hail and shine. Through good times and bad.
It’s the same old routine every morning, one well-rehearsed over 40 years of business. 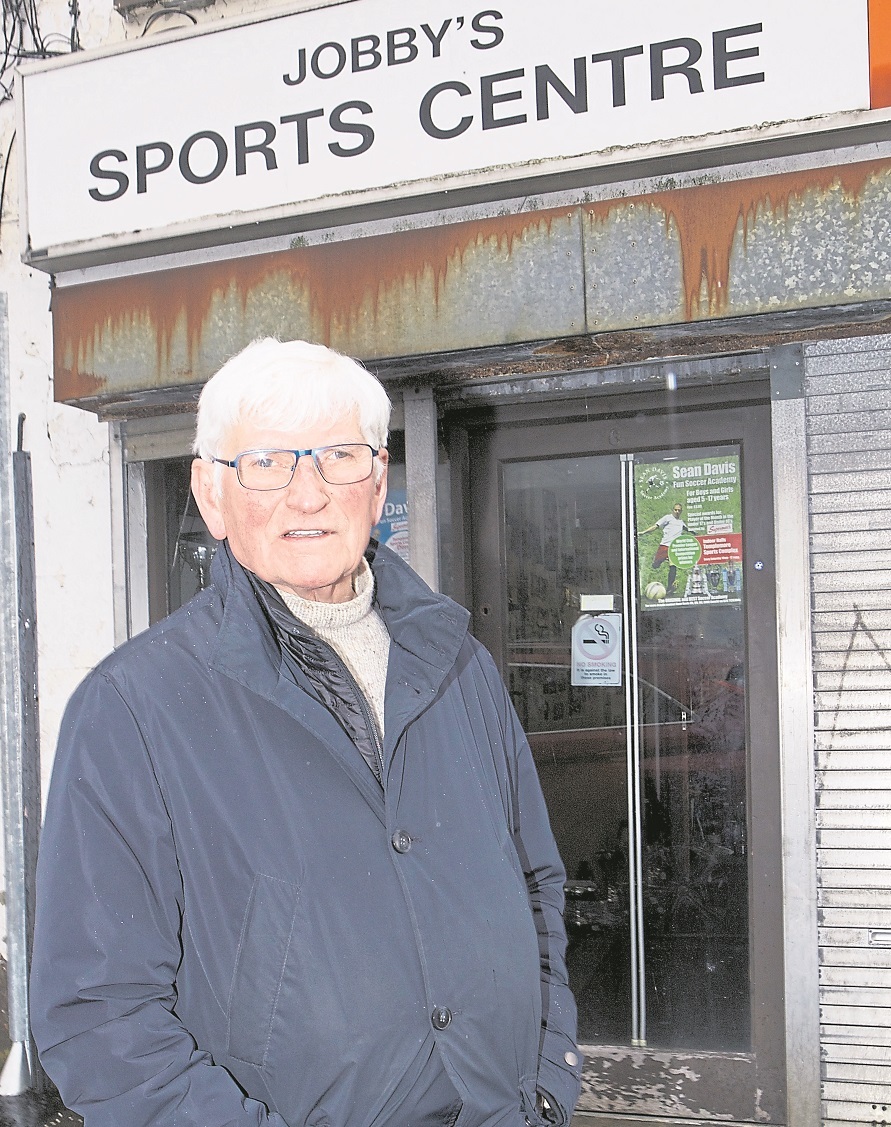 PICTURED: Jobby’s Sports Centre opened in the late 1970s after he bought it from his friend Raymond Daly. 'I was entering a business I knew something about,’ Jobby says now. Picture: Tom Heaney (nwpresspics)

But this is no ordinary shop, and this is no ordinary shopkeeper.
John Hume can probably hold claim to be Derry’s most famous living citizen. But without any shadow of a doubt, the Maiden City’s most famous sporting son is John ‘Jobby’ Crossan.
Crossan needs no introduction in these parts, but for the benefit of the uninitiated ‘Jobby’ Crossan was born in 1938 at Hamilton Street in Derry.
A precocious talent Crossan played as an inside forward (a striker in old money) for his hometown team, Derry City. His performances quickly garnered the attention of the top scouts from England, where the Daily Express spoke of the "19-year-old wonder boy of Irish soccer … Ireland's Jimmy Greaves."
In August 1959 he joined Sparta Rotterdam, before making his debut for Ireland against England at Wembley. But more of that game later.
Crossan joined Standard Liège in 1961, playing for the Belgian side in a European Cup semi-final against Real Madrid.
Ian Rush may have famously described playing in Italy like being in a foreign country, but the Derry man negotiated this precarious new life abroad with all the sure-footedness of a mountain goat. 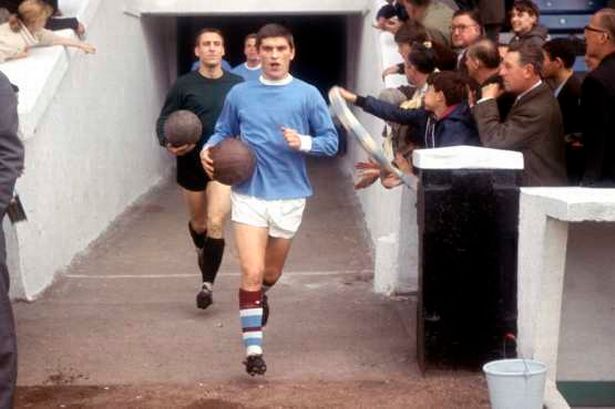 PICTURED: Fully focused: team captain Crossan leads out Manchester City, a club he joined after a successful spell at Sunderland. He moved on to Middlebrough in 1967.

“It was great,” he enthused. “I thoroughly enjoyed it. I might have been lucky as a player but obviously I could play a wee bit. We learned a couple of languages and things. We were fortunate because we were winning matches, playing for trophies. Played against the top teams. We played Real Madrid in the semi-final of the 1962 European Cup. We beat Rangers in the quarter-finals and I happened to get two goals.”
In September 1962 he moved to Sunderland, the start of a successful eight-year spell in England that also took him to Manchester City (where he was captain) and Middlesbrough.
In a European Championship qualifier against Poland he scored one of the finest goals that Windsor Park has ever witnessed, a spectacular and acrobatic volley from 25 yards. And in a World Cup preliminary game Crossan scored three against Albania.
He retired from the professional game in 1975.
But this isn’t a feature about a footballer, a special talent, a shopkeeper. That tale has been told before.
This is a story about something more important than that.
This is a story of friendship.
Upon retirement Crossan faced the same dilemma as most professional sportsmen – how to fill the void.
“Your whole world changes and you have to find something to fill that hole,” he explains. “I decided to come back home to Derry.” 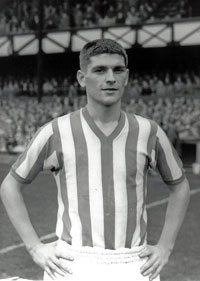 PICTURED: Jobby Crossan in his Sunderland days. He was a prolific striker, scoring 39 goals in his 82 appearnces for the club between 1962 and 1965.

That particular hole in his life was filled by a sports shop in Pennyburn he bought in the late 70s.
“I bought the shop from a friend of mine, Raymond Daly. I thought I knew a bit about sport and this might do. I was entering a business I knew something about.” Jobby’s Sports Centre was born.
You think of Barcelona’s great club motto – "Més que un club" (more than a club). Well Jobby’s became more than a shop.
Almost from its inception the place became a magnet for friends – old and new – to congregate; to chat about football, to hotly debate, to blether, but above all else to laugh.
This has been the case for over four decades now, and, like the proprietor himself, shows little sign of slowing down. Not dissimilar to the barber shop scenes in Coming To America, the cast in Jobby’s Sports Centre varies from day to day. But it never empties.
Joe Quigg, Roger O'Doherty, Donal Ferry, Bobby Ross were all in attendance on this particular wet and windy Monday morning.
Charlie Johnstone calls, as does Wee 'Black' Joe Doherty, Harry Nelis and Noel Crampsie.
Joe Doherty comes down from Strabane to chew the fat on all matters cricket related.
On Thursdays Jimmy Blair, an old friend from Jobby’s playing days, Harry O’Kane and Alfie Taylor make the trek up from Coleraine without fail.
Sometimes there aren’t enough chairs to go round and the host perches himself on a low hanging shelf, when he’s not ferrying tea back and forth. 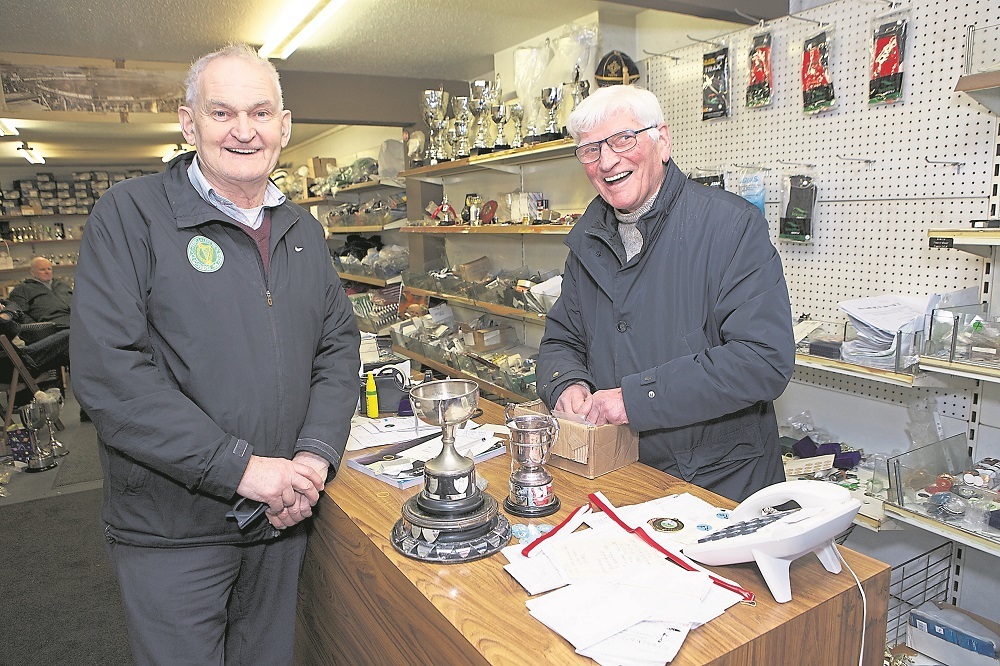 They huddle around a gas heater that owes them nothing, swapping stories, slagging, telling tall tales – all cloaked with that quintessentially Derry sense of humour, based on familiarity and gentle ribbing.
“These boys would come into the shop and I thought they’d keep me on the straight and narrow. Turns out they just kept me on the narrow, and drank all my tea,” explains the host. “I go through three kettles a year!”
Stories abound of local players, local teams, past and present. Their love of the game still undimmed, and the warmth among this band of brothers is evident.
Football connects people. And sometimes those connections last a lifetime.
Jobby, of course, has encountered more than most.
“I’ve met three kings. The Swedish, Belgian and Norwegian Kings,” insists Crossan, very matter-of-factly.
In 1959, before his debut for Northern Ireland against England, he met Field Marshall Montgomery at Wembley.
Crossan re-tells the occasion with a photographic recall.
“You’re from my neck of the woods old spud?” says Crossan in a posh English accent to the mirth of his companions.
“Nearby” replied Jobby. “You’re from Moville and I’m from Derry.”
“Very good,” came back Montgomery, “Have a good game!”, again to enthusiastic laughter.
“But that’s how it is in football. You run round making friends, and there was I from the Brandywell in Derry rubbing shoulders with a World War 2 general.”
Jobby, of course, became great friends with George Best and the Derry man has nothing but fond memories of his old Manchester housemate and international team-mate.
“Not for publication!” he says with a glint in his eye when asked did he have any stories he’d like to share.
“George was one of the greats. There were good players about like Pele and Di Stefano, but George played in a league where they would kicks lumps out you. Players went out to nail him. But George was unique, a class of his own. He was more or less reared in my house in Manchester. We never got peace. One Friday afternoon we had two Miss Worlds in.”
“George had them both!” jumps in Donal Ferry, again to roars of laughter. 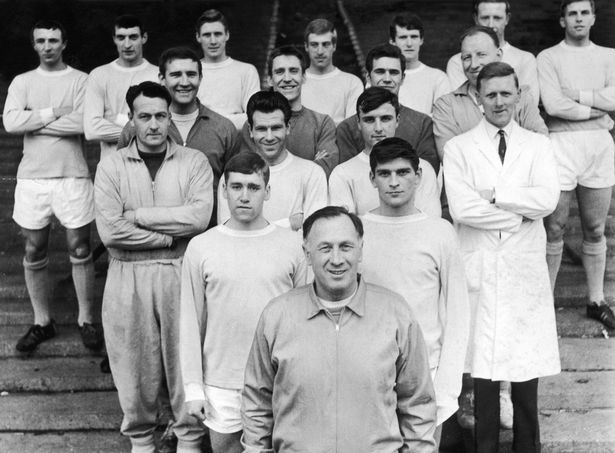 The bond between friends get much stronger with age, according to a recent study from the University of Michigan.
Friendships play a key role in health and happiness – especially as we get older.
The study wasn’t written about Jobby Crossan and his friends in the shop, but it might as well have been.
Former East Stirling and Derry City player Bobby Ross would be the longest serving attendee at Jobby’s.
Indeed, the two veterans had been playing in a weekly five-aside game at the Templemore Complex up until last year when a locked cartilage finally brought an end to the great man’s career at the age of 81.
“Cut short in my prime!” Jobby quips, only half joking and ever the competitor.
“I’ve been coming in here from the start,” says his friend Bobby in a soft Scottish accent that hasn’t left him despite living in these shores as long as the shop has been open.
“Sure, I’ve nothing else to bloody well do!”
“No, the craic’s good,” he continues, “the craic’s always very good in here. It soon passes an hour or two and you can get tea and coffee any time. And you might get an odd bun!”
In a final poignant moment he confesses: “No, I’d be lost without it to tell you the truth.”
Bobby Ross seems to speak for them all when he says these words.
At the close of business, the gas heater is switched off, the lights dimmed and the shutter comes down once more.
The front door key still refuses to play ball, especially in these dark nights, before it finally turns in the lock.
But this is far from daily drudgery, it’s a labour of love.
In the sweetness of friendship let there be conversation and laughter, for in the dew of the morning that is where the heart is refreshed and stays forever young.
Jobby’s Sports Centre – more than a shop.