McChrystal admits City were off the Mark 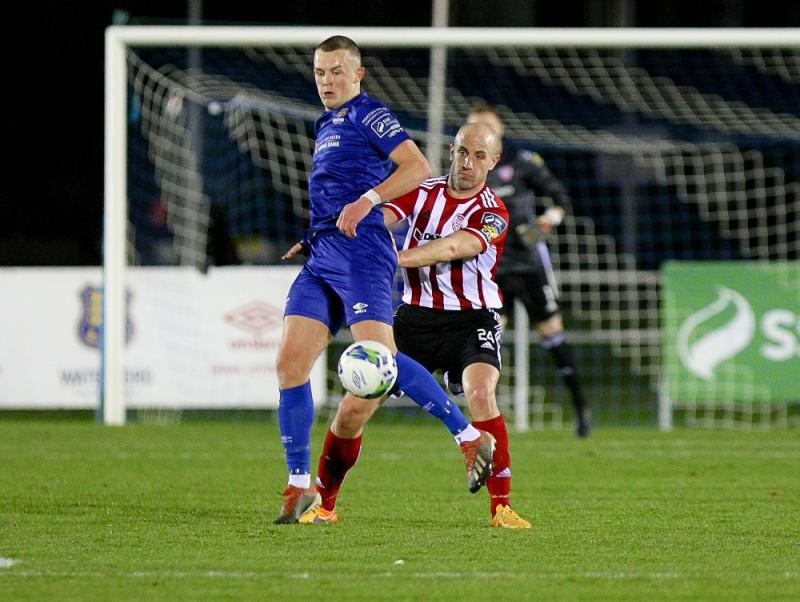 BACK IN ACTION... Mark McChrystal made a return to the starting line up in place of the injured Ally Gilchrist at Waterford. Photo: Kevin Moore

Mark McChrystal believes that Derry City got what their performance deserved in Waterford – and admitted there will be no magic fix against Sligo Rovers on Friday.
The Candystripes return to the Brandywell on Friday to face a Sligo team still without a win, but any favourites tag that may be attached to the home team will not matter if the City players do not improve from a return of just one win in four league games, according to McChrystal.
“This is a tough league, every game is tough and you have got to earn the right to win games and next week against Sligo Rovers will be no different,” he insisted.
“It’s another tough one for us and it’s the first game of three matches in the space of seven days, so that’s going to be a tough week for the squad. As I said there’s no easy matches in the league and the sooner we realise that, the better.”
McChrystal made his first start of the season at the RSC and was arguably the only City player to leave the pitch with his head high, but that is of no consolation to the 35-year old, who believes the visitors did not appear for the second half.
“I don’t think we performed the way we can and obviously the manner of the two goals, one right before half-time and the other right before the final whistle, isn’t what we wanted,” he added.
“It’s always going to be tough and you have to roll your sleeves up and do all the dirty parts of the game and then hopefully you can open things up in the final third as the game progressives and then maybe create something and get a goal, which we did, but their goal right before half-time, killed us.
“In saying that it was only 1-1 and we were still in the game; we had to come out in the second half try to go again and look to create the chances, but as I don’t think we did that tonight and probably got what we deserved in the end.”

Far from convincing
As an attacking threat, City have been far from convincing this season so far, with just four goals in four games. They laboured in attacking areas of the pitch on Friday and McChrystal admitted that it is a concern.
“The way the game was going, they had the momentum and as a group we have to sit in there and just say ‘listen you know what, we’ll take a 1-1 and get back up the road with a point’, because in the second half I don’t think we looked like scoring,” he explained.
“It’s concerning that we didn’t look like scoring, but it’s up to us to change that. As a group now we have got to get our work done in the training ground and go again next week, that’s the only way you can go about this.”