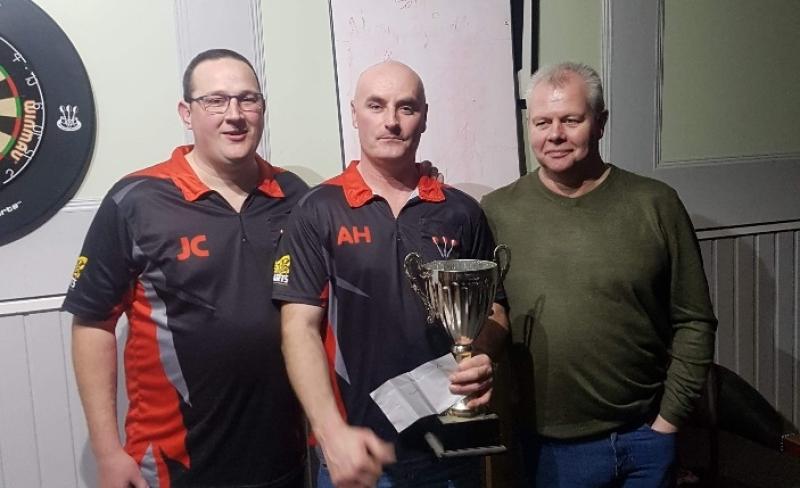 Mailey's Bar have retained the George's Bar sponsored cup last Friday night with a last leg captains pick shootout against Laurences.
The first semi final saw the top two teams in the league battle it out for a place in the final and with the format for the cup being singles, doubles, trebles, singles, league form goes out the window which leaves it anybody's game.
First up saw Declan Gallagher take on Danny McDaid in a best of 3 singles match and with some high scoring and clinical finishing from McDaid, Mailey's went one up. That scoreline was doubled when last year's pairs champs Clancy and Wilson were drawn to play against Shaun O' Hagan and Eddie McDermot in what can only be described as an epic match with loads of tons plus scores and some delightful finishes. Clancy and Wilson took this match and put Mailey's in control.
In the trebles match Hegarty and Gallagher saw off the efforts off Gill, Gallagher and Maginnis to complete the whitewash and send Mailey's through to the showpiece.
The 2nd semi final saw Laurences 'A' defeat the hosts Georges a by 3-1 to reach the final. There was no sheet returned for match report so onto the final itself.
Mailey's faced Laurences and what a cracker of a game this was. First up for Mailey's was last year's singles champ Sean Wilson against Glen Temple and only for a few wasted darts from Temple this match could have been an upset but Wilson's vast experience just about shone thru to edge victory from the jaws of defeat to put Mailey's 1 up in their quest for silverware.
Parity was restored when the pairing of Colm Miskelly and Leroy Carlin defeated the Mailey's pairing of Dean and Shaun Gallagher with Carlin being the outstanding player in this, setting his partner Miskelly up in the deciding leg to level the match at 1-1. 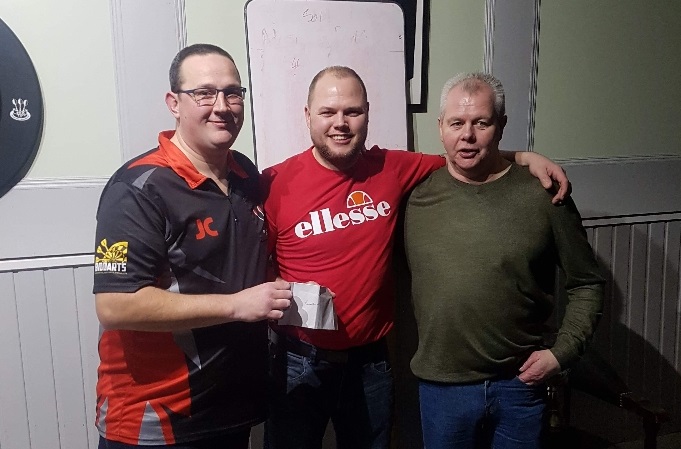 Laurences moved ahead in the very next game with the trio off O' Kane, Ramsey and O'Neill taking advantage of some bad darts from the Maileys trio off Gallagher, Hegarty and Clancy to put Laurences on the brink of victory.
With the match finely poised, the next match was a pivotal moment for Pearson as victory over McCallion would see Laurences run out 3-1 but McCallion had other ideals and duly dispatched Pearson 2 nil to set up the captain's pick match decider, which was to be
Hegarty vs O'Neill in a best of 3 shootout to determine this year's winner.
Both players were very nervy in this match. In the first leg Hegarty missed darts at doubles to go one up with O'Neill grinding away and taking his chance to go one up.
The match was finely poised and victory in the 2nd leg for O'Neill would have given Laurences victory but Hegarty showed determination and grit and hit a double 9 to set up a last leg decider.
The last leg decider saw both players get off to a great start but it was O'Neill who got to the double first. 5 match darts were missed by ONeill and 3 by Hegarty and saw this game and match end up very nervy double 4 from Hegarty to send the Mailey's team into delirium as he won the match and cup for the 2nd year in row over the unlucky Laurences bar.
The Committee would like to thank Sean Mc Laughlin and George's bar for their continued support sponsorship of the cup and facilities on the night.

Back to league action this week with followings games down to be played Friday, 6th March.
Maileys vs fairview
Phoenix vs laurences
Mary bs vs George's a
George's b vs laurences b

The league Committee would like to congratulate Phoenix player Paddy Maginnis for his exploits in helping team Northern Ireland secure the Celtic Cup last weekend and also to Mailey's player and Donegal captain Sean Wilson on the recent success at the all Ireland championships and becoming champions. Well done both players and teams.