A tremendous reception awaited St. Mary’s College Year 12 student Caitlin Toland on her arrival bak with the Six Nations trophy in the 60kg category at the WRSA Kickboxing event 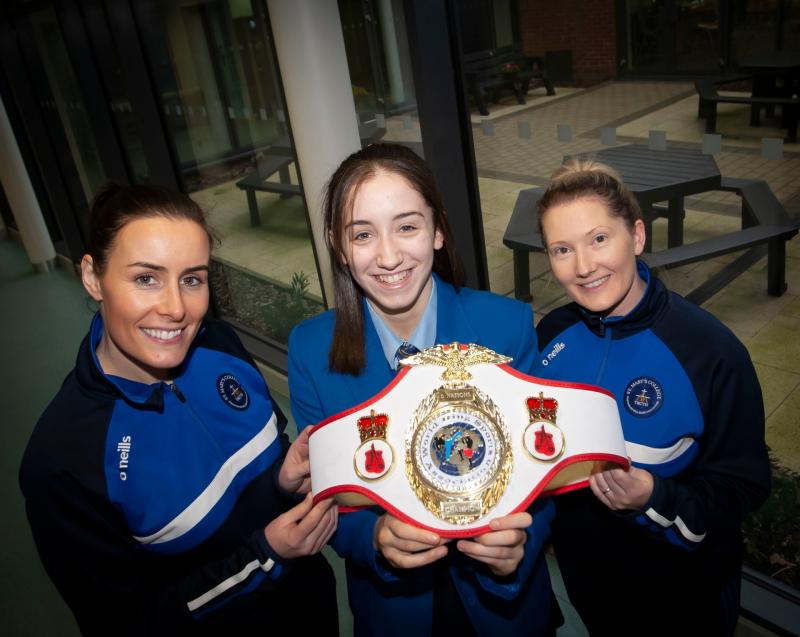 A tremendous reception awaited St. Mary’s College Year 12 student Caitlin Toland on her arrival back from Glasgow at the weekend where she picked up the Six Nations trophy in the 60kg category at the WRSA Kickboxing event.
Galliagh girl Caitlin who only started the sport at 12 years of age now holds the WKU English belt and WKU British belt and is also WKU German champion in full contact at 60kg.
The icing on the cake saw the St. Mary’s Year 12 student add the prestigious Six Nations belt to her trophy cabinet.
Senior teacher, Ms. Yvonne Connolly paid tribute to Caitlin during a full school assembly on Monday morning last emphasising how proud the school was of her tremendous achievements.
‘Caitlin is fully dedicated to her sport and in between her studies spends a lot of time training hard to prepare and travelling long distances to participate in the many kickboxing tournaments around the country and indeed, across the water. St. Mary’s College fully support Caitlin in her all her efforts. She is a credit, not only to the school, but her Club, her parents and our city.’

Self-confidence
The Six Nations champion only took up the sport at twelve years of age in 2016 and puts it down a determination to improve her physical health and boost her self-confidence.
She takes up the story: ‘I want to pay a big tribute to my coaches Uel and Gareth Murphy. I was very quiet and shy as a child and they helped develop my love for the support. It was through them that I developed a passion for kickboxing. I’ve gained so many friends through the sport as well as getting the chance to travel throughout the country doing something I love.
‘I’ve been to Killarney, Greece and Austria as well as all over Ireland and the UK.’
The modest student says she is very proud to have won the Six Nations belt in Glasgow and described the 5 x 1.5 minute rounds against Mirren Bisland as tough but enjoyable. 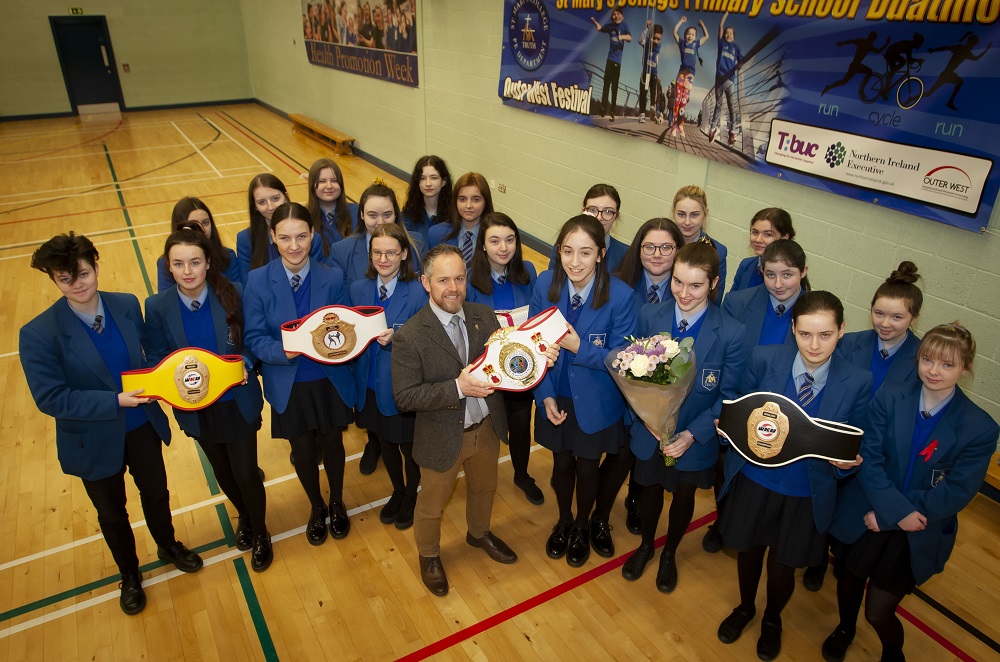 ‘The fight was stopped in the fourth round by the referee and I feel this was my best victory to date. I couldn’t do this without the endless support of my family, friends, coaches, WKU Northern Ireland team and my school, St. Mary’s.’
She went on to thank the many sponsors who have supported her in her travels and training sessions throughout the years.
Speaking on behalf of the PE Department at St. Mary’s College, Head of Department Mrs Martin said: ‘As a department and indeed the whole school, we are incredibly proud of Caitlin’s huge achievement. She is strong, resilient and these qualities have served her well in this tough sport. Congratulations from all of us.
And it’s onwards and upwards for the St. Mary’s College fighter as the calendar for the rest of the season includes the British Open on May 3; Junior World Cup on May 23; German Open on June 19/20 as well as a long jaunt to Canada in October to take part in the WKU World Championships.