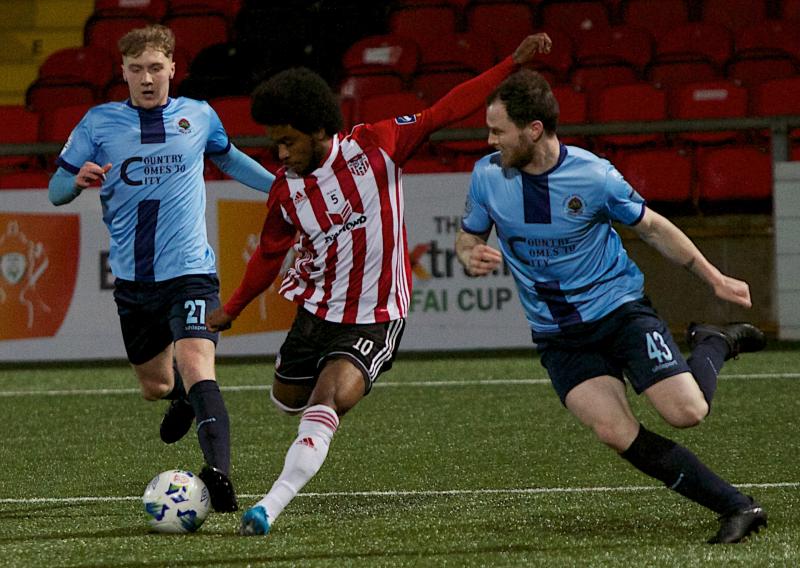 Tuesday night's Billy Kee Memorial Cup victory was a bittersweet one for Derry City after Institute's spirited second half fightback gave Declan Devine and his coaching staff food for thought with the new season just over two weeks away.
The first half will have pleased Devine with Walter Figueira running the show, getting his first Derry City goals to send the Candystripes into half time comfortably ahead in both the score line and the performance.
The second half was much different however and credit must go to Institute for that, with two goals from two set-plays making the result a respectable one, with only an absolutely fantastic goal from Ciaron Harkin making the difference come full time.
It left Devine and Kevin Deery in reflective mood after the club's third pre-season friendly game.
“We’ve scored good goals throughout pre-season,” Deery explained. “Probably conceding the goals was the biggest negative of the night, but it’s all about getting minutes into the legs. There have been manys a year when you’re watching performances in pre-season and they are a bit up and down and temperamental.
“We are glad for the goals we have scored but we just have a bit of work to do on our defensive displays and that’s what we’ll work on in the next couple of weeks.”

Excitement
There has been great excitement about the addition of Walter Figueira in the close season, with the Londoner showing some exciting ability through pre-season so far. It took him just four minutes of this game to get his first goal for Derry City, a sensational through pass from Ciaron Harkin putting the forward through. Institute goalkeeper Rory Brown hesitated ever so slightly and gave Figueira all the invitation he needed to prod the ball into the net to open the scoring for an appreciative Brandywell crowd.
Another new signing Conor McCormack almost followed that up with a spectacular strike from distance just a few minutes later, his effort from 30 yards beating Brown but striking the outside of the post.
It was a freezing cold night at the Brandywell but Figueira was doing his best to warm up the crowd and he made it 2-0 with a spectacular second on 20 minutes, receiving the ball just inside the penalty area on the left hand side before sending a bullet of an effort past Brown who was beaten by the sheer pace of the shot.
Walter should have had his hat trick as half time approached, getting on the end of a cross from Jamie McDonagh, but he was unable to turn the ball on target at the near post.

Half Time 0-2
Both teams made a number of changes at the beginning of the second half, with Sean Connor sending on four players, while Declan Devine changed three, with Norwegian striker Tim Nilsen on hoping to add to the two goals he scored against Finn Harps last week.
It was ‘Stute who threatened first however when Colm McLaughlin drove forward from full back and tested Nathan Gartside who comfortably held ‘Stute’s first shot on target.
‘Stute got back into the game midway through the half when substitute Cormac Burke whipped a free kick into a crowded penalty area and Ally Gilchrist turned the ball inadvertently into his own net. The goal infuriated goalkeeper Nathan Gartside who made his feelings known. 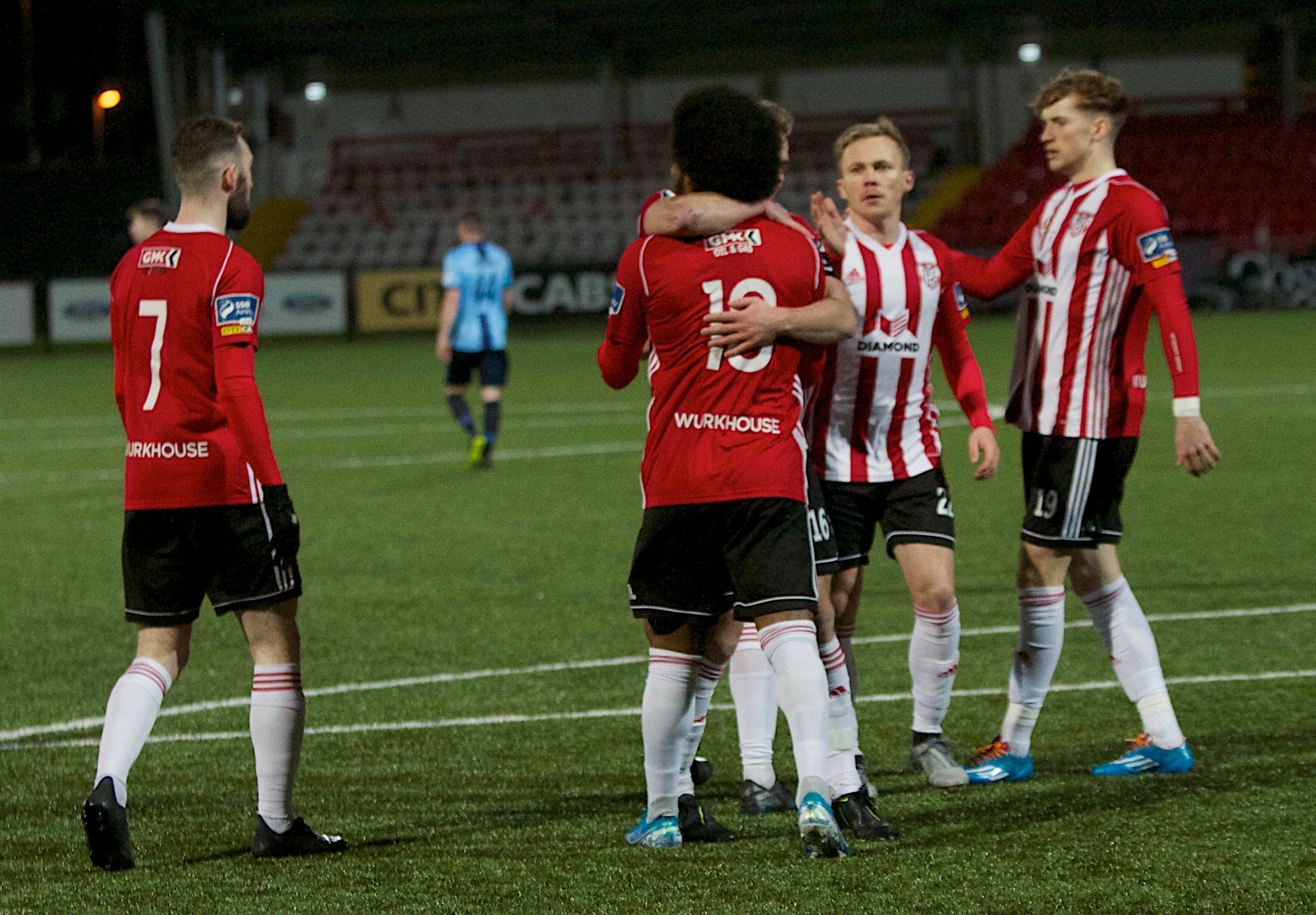 PICTURED: The Derry City players congratulate Walter Figueira on his first goal for the club.

Derry City responded brilliantly to that goal and after a rather pedestrian second half, they regained their two goal advantage when Nilsen teed up Ciaron Harkin 20 yards out and the midfielder ran onto the ball and absolutely smashed it past Rory Brown and into the top corner to make it 3-1.
The second half ended the way it started with a raft of substitutions from both sides, but credit to ‘Stute for making the closing stages interesting as Burke’s delivery from a set play again caught Derry out, his cross finding Dean Curry who stooped low to send a glancing header past Gartside and into the corner of the net with just two minutes remaining.
Ultimately it was not enough for Institute, but there is little doubt that Sean Connor was the happier of the two managers at the final whistle. For Devine and co however, there is still work to be done, with Dundalk at Oriel Park looming large on February 14.