Clifford promises Derry will see 'the best of me'

Former Chelsea youngster admits that he he knows he still hasn't produced what he is really capable of in the League of Ireland. 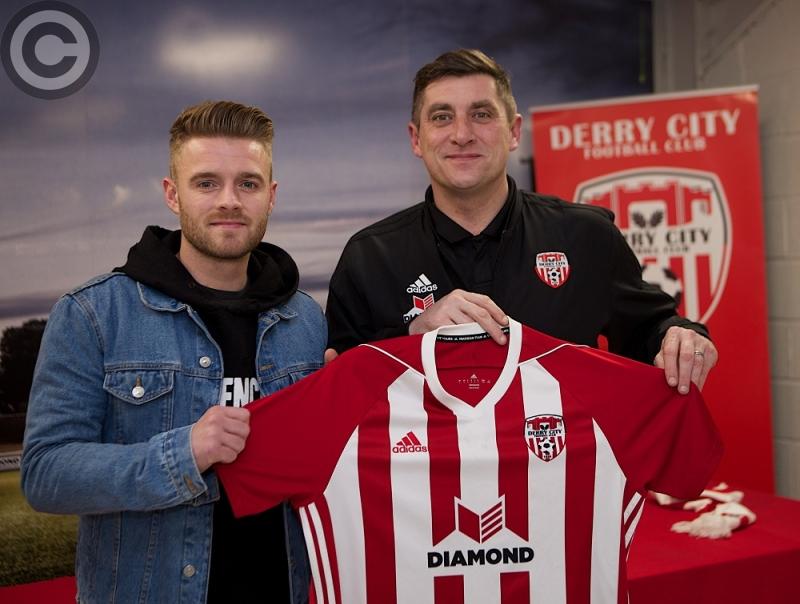 Conor Clifford has promised that Derry City fans will see the best of him in a red and white shirt with the former Chelsea youngster admitting that he he knows he still hasn't produced what he is really capable of in the League of Ireland.
Clifford's time in England was one of frustration and since returning to Ireland he has had spells at Limerick, Dundalk and St. Patrick's Athletic. The 28-year old was unveiled as Declan Devine's second signing of the close season on Tuesday evening and he admitted that he feels he may have finally found his home with Derry City.
“I needed a home,” he said. “I thought I had that last year but one thing or another happened behind the scenes. I know that this is a real family town and a real family club and I wanted to be a part of it. I know it was definitely the right decision moving here.
“Obviously it's a long way from home but I'm willing to come here and put my head down and give my all for this club and hopefully we have success and a good run in Europe. I still have some good years left in me and I'm hungry more than ever to prove people wrong.”
Clifford enjoyed a close relationship with former St. Pat's manager Harry Kenny and he acknowledged that man-management style was a big factor in his move to the Brandywell.
“Harry Kenny was great for me when he was there,” he agreed.
“He had good man-management skills and I know from speaking to a few of the lads that Decky is the same. I heard he is a tough man but he will put his arm around you as well and I know that he is going to get the best of me. I've said the same thing over and over - I can't wait to get started. I feel that, since I've come home, I've done well but I haven't hit the heights that I know I can do and I really feel it's my time now.”

Devine delighted
The capture of Clifford has understandably delighted Declan Devine who has had to be patient in his pursuit of new players. The City boss denies though that Clifford was a replacement for Dundalk's Greg Sloggett, insisting that they are two different types of players entirely.
“He has quality as a player but he also has experience and leadership and the ability to bring young players through. He has a real lot of ability on the ball, a player who can not only contribute in terms of penetrative passes but also a guy who can get goals from midfield. One of the things I felt that we could have improved on last year was our goals tally from midfield and Conor Clifford can do that. I think he cam easily fall into the way we want to play.”
“I think the Brandywell will suit him, I think playing for Derry City will suit him and again he's another player we've had our eye on for a long time. I'm really surprised that he was available and the minute he was available we wasted no time in touching base with him and we're absolutely delighted to get him over the line.
Devine is hopeful of bringing in yet more new faces in the coming weeks, and he believes that City's achievements in 2019 have opened the door to players who may previously have been unavailable.
“When we came in last year we were able to attract a lot of good quality players,” he stated. “I think our performances last year have enabled us to go up the gears in the type of players we have already brought to the club – Walter Figueira and Conor Clifford – two players last year who might not have been on our radar because we were starting from scratch.
“We are going to have the nucleus of a very strong squad from last year and when you can add players of the quality of Conor and Walter then I think we're sitting here in a much stronger position going into Christmas. This time last year we were sitting with five or six players but this year we're adding players of quality to the group.”