'We're now a positive prospect for any player'

The signing of Walter Figueira proves that Derry City can now attract the best players in Ireland to the Brandywell. 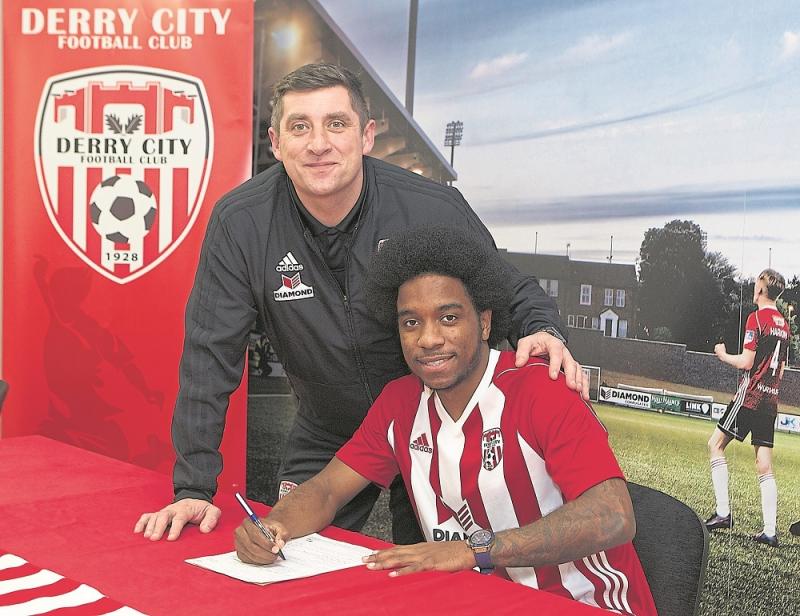 The signing of Walter Figueira proves that Derry City can now attract the best players in Ireland to the Brandywell.
That is the view of manager Declan Devine who unveiled his first signing ahead of the 2020 season with the capture of Figueira, who played the last half of the season at Waterford United.
Derry City fans will remember Figueira for his two-goal debut for the Blues when they played Waterford in the EA Sports League Cup back in August, and it was the 24-year old’s performance that night which caught Devine’s eye.
“He’s someone we have been very keen on bringing to the club for a long time,” he explained.
“He made his debut for Waterford against Derry City months ago and from that first time he has been one of my main targets. He is potentially a fantastic Derry City player; he has all the attributes, he’ll be exciting for the fans, he’ll be a positive player for us with the way we play and I’m looking forward to working with him.”
Figueira admits he quickly ‘fell in love’ with the prospect of becoming a Candystripe after talking with Devine and Paddy McCourt about the club’s vision for the future.
“I’m very happy to be here,” he stated. “The conversations I had with Declan and Paddy were superb. They were very, very happy with how the season went but they want more and I really love that because I miss having that winning mentality. I like the vision they had and it’s very mutual and I’m really excited to be at Derry City.”
Figueira admits that his Waterford debut at the Brandywell has stayed in his mind, and not just because of his two goals.
“The week before I made my debut I watched Derry City and they played fantastic football I won’t deny it,” he continued.
“I liked the style of play and I fell in love with it. Where I benefit as a player is in possession and with the chances that Derry create the feeling was very mutual to come here. When I spoke with Declan and Paddy the energy was amazing and I knew that we could become something big.
“The atmosphere is intimidating here. The fans get really behind their team and also with how much the city loves football; even the history as well with the club doing the treble, these are things I want to try and replicate and bring that winning mentality here. I just feel that there is a lot of potential here.”
Derry City have already lost Greg Sloggett, Darren McCauley, David Parkhouse and Junior Ogedi-Uzokwe in the close season, but with the addition of Figueira, Devine believes the squad can be as strong going into the new campaign.
“We would never have been able to attract Walter Figueira to this club 12 months ago, but the success of last season has given us a platform to build on and I certainly think we’ll be stronger with Walter in our squad leading into 2020,” he said.
“His energy, his professionalism and his appetite for the game has been very heart-warming from us all whenever we sat down and spoke. He is a very mature player for his age and he can lead in the changing room and on the pitch.
“Ultimately he wants to strive to get better and we’re delighted that we have a top, top player come to the club.”