No ray of sunshine for 'Stute

Referee Raymond Crangle was at the centre of the storm at the Brandywell at the weekend, awarding two controversial penalties to Linfield as they defeated Institute. 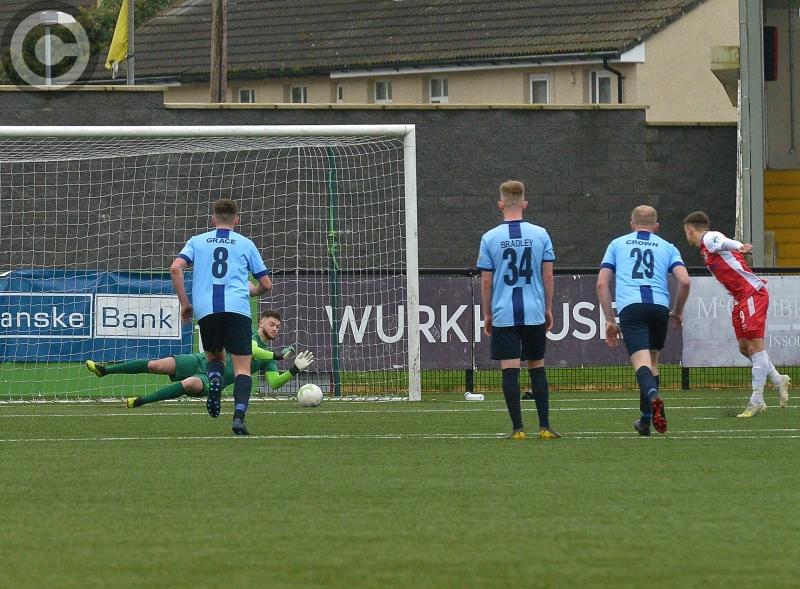 REFEREE Raymond Crangle was at the centre of the storm at the Brandywell on Saturday, awarding two controversial penalties to Linfield as they defeated Institute.
A third penalty at the death was much clearer, but by that time the game was already over as ‘Stute’s impressive unbeaten run came to an end.
Crangle awarded the first penalty on 35 minutes when Ryan Morrow slid in on Joel Cooper. He appeared to get a slight touch on the Linfield man who played on, but the referee instead signalled to the spot.
It was missed by Cooper, but an even greater point of controversy came five minutes later when, after a Linfield corner, Morrow and Jimmy Callacher clashed off the ball. 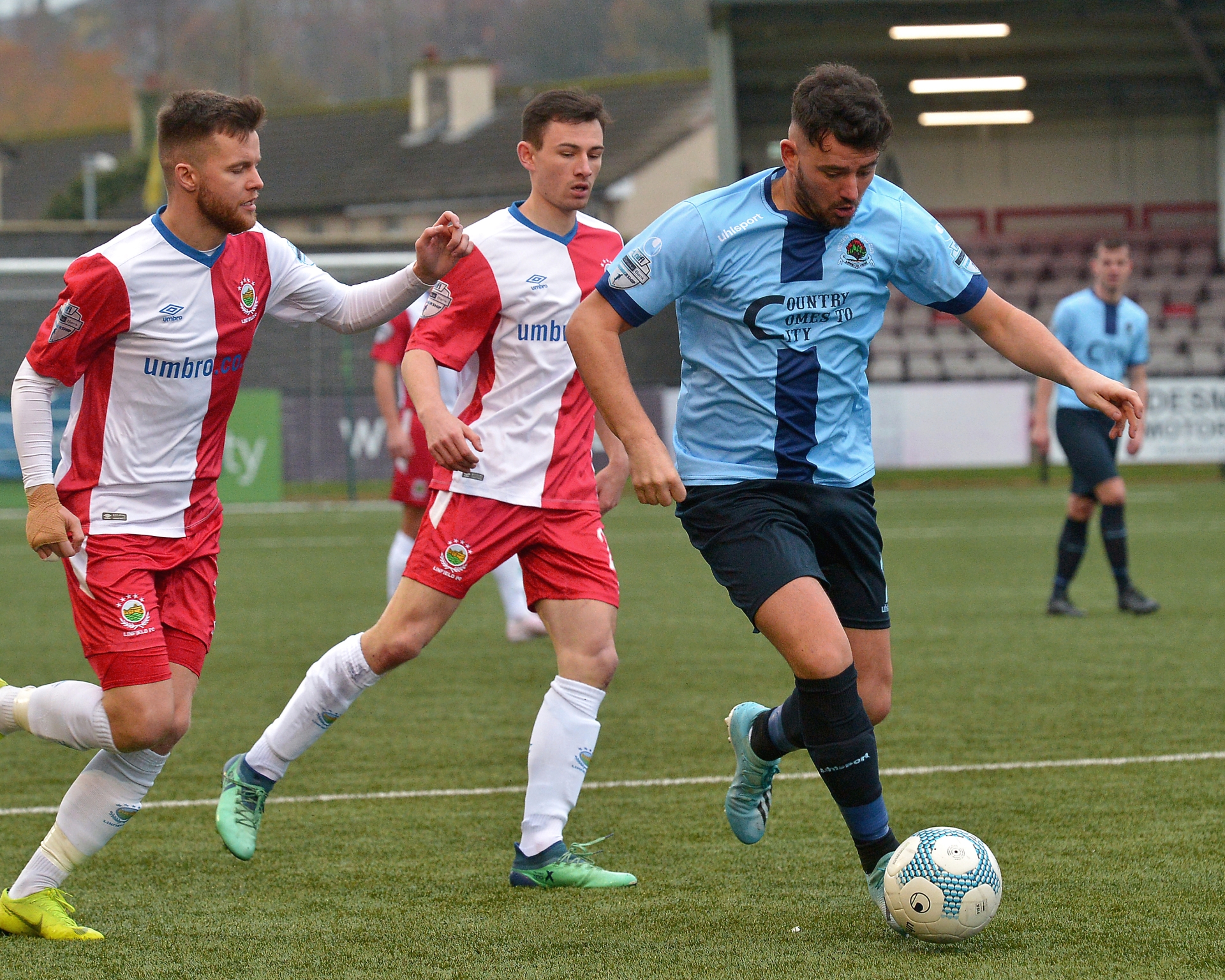 The Linfield man, on the ground, appeared to throw a fist into the stomach of the full-back who lashed out with a kick in return. Crangle, however, showed only Morrow a straight red for his involvement and awarded Linfield another spot kick that Andy Waterworth buried.
A Bastien Hery goal on the stroke of half-time had Linfield in control, and although ‘Stute battled hard and impressively in the second half the result was given a shine by that late Waterworth penalty.
When asked about the penalty decisions, Sean Connor was blunt and honest in his response – instead choosing to praise the performance and effort of his players.
“I don’t even want to talk about them. It was stupid. S-T-U-P-I-D,” Connor told the Derry News. “You even heard their fans at the end singing ‘Raymond Crangle, he’s one of our own’ – he must have a season ticket. I’d check that out.
“I’m really, really happy with our performance because I thought we were magnificent. Linfield came here and tried to pin us back in the first five or ten minutes. It didn’t work and I’m not saying there was a lot in the game, but our shape was magnificent. We contained them and then the game was ruined.
“I understand he has to give the penalty, but Ryan Morrow doesn’t kick out unless something happened to make him do it. The stupid thing was when he gave the penalty the ball was back at the halfway line.
He continued: “If they’re going to give penalty kicks like that, then this Irish League is going to be absolutely ridiculous because there wasn’t a bad tackle in any one of those penalties.
“I’ve managed Sligo Rovers and I’ve managed Bohemians and there’s a definite difference if you’re a big club when it comes to decisions going for you.”
With Ballymena United up next followed by a north-west derby against Coleraine, Connor insisted it won’t be difficult to pick his players back up.
“That’s not a defeat. The belief system and the standards that we set were all there. That’s a game that we can chalk off to experience,” he stated. “If we play like that every week, then we don’t have a problem.
“After a performance like that, it’s easy to pick the players up. Even with ten men we completely frustrated them, and they had to get another penalty kick to score.”
On a positive note, Connor handed another young player his debut on Saturday with the late introduction of Matthew Stephenson, and the manager insisted there is a lot to be optimistic about with the players coming through.
“It was a really good decision from us because we knew the three points were gone and instead of putting someone of for the sake of some time we wanted to use the opportunity to blood a youngster in for the future,” he explained. “Our players have come away disappointed and shattered.
“We’ve lost the three points, but we’ve blooded Stephenson in, we had Evan Tweed on the field for 20 minutes who looked really good, and we’ve come away with our heads held high.
“Their keeper made some brilliant saves. It’s not too often you have ten men and are forcing the goalkeeper to make those saves."

SLOW
After a slow start to the game the first point of contention came on 18 minutes when Aidan McCauley went in with a heavy but fair challenge on Niall Quinn, who was forced off with an ankle injury as a result – replaced by Andrew Mitchell.
The tackle caused tensions to rise between the two benches, but it soon simmered down as play got back underway.
McCauley was involved in everything early on, and on 27 minutes he had the game’s first shot on goal when McCready did well on the edge of the box to get away from Jimmy Callacher before playing it back to the former Limavady United man. He drilled it from 30 yards, but Rohan Ferguson got down low to his right to save easily.
The game turned on its head on 34 minutes when Andy Mitchell sprayed a superb pass across to Cooper who turned into the box.
Ryan Morrow slid in and appeared to get a slight touch on the winger, but Cooper didn’t go down and attempted to play on. Referee Raymond Crangle had other ideas, however, pointing to the spot much to the disbelief of even the Linfield man himself. Cooper placed the ball but Rory Brown, who was man-of-the-match in last week’s draw with Glentoran, guessed right and got down to his left to save.
There was further drama on 40 minutes, when Morrow got involved in an off-the-ball incident with Jimmy Callacher after pinball in the box from a corner.
The Linfield captain appeared to punch the ‘Stute full-back in the stomach before Morrow launched a kick – with Crangle issuing a straight red to the man in blue and awarding another penalty.
This time Andy Waterworth placed it and went straight down the middle, with Brown getting a touch again but it wasn’t enough to prevent the goal.
The frustration was clear from Sean Connor’s players who, rightly, felt that Callacher should also have gone, with no penalty awarded.
The home side were in disarray, and the champions took advantage to double their lead on 46 minutes when they launched a quick counter, and Bastien Hery showed silky skills to jink his way past three men on the edge of the box before curling it past a helpless Brown from 18 yards to reinforce their advantage heading into the break.
The frustration of the home side was evident as they headed into the tunnel for the break.

‘Stute had the first chance of the second half on 52 minutes when Aidan McCauley floated a pinpoint free into the box, and McCready did brilliantly to crane his neck and get a header on goal that looked set to deceive Ferguson, but he backtracked and got fingertips on it to send it over the bar.
The visitors could have extended their lead at the other end moments later when Casement found Waterworth in acres of space at the back post, but his first-time volley was straight at Brown.
Stephen Fallon was next to have a go but with chipped effort that never really bothered the ‘Stute keeper before havoc in the box on 62 minutes ended with Kirk Millar blazing it over the bar.
It was a tale of the goalkeepers again on 66 minutes when Brown saved from a Casement shot before Ferguson pulled off a brilliant stop to deny McCready, signalling a warning sign from the home team that they hadn’t given up yet.
Ferguson denied McCready again on 77 minutes when the ‘Stute striker tried to curl a free kick to the top right corner. From the resulting set piece Dean Curry headed off target before Linfield were forced to clear from under their own bar.
Former St Columb’s College student Matthew Stephenson came on for his debut nine minutes from time as McCready tried his luck again, but this time he curled a snapshot wide before Casement headed the wrong side of the post.
The inside of the post denied Healy’s team their third in added time when Kirk Millar’s whipped free from the left glanced off the head of Stafford but came back off the woodwork.
But, they did get a final goal at the death when Crown was penalised for a foul on Cooper, and Waterworth buried his second spot kick to seal all three points.