Qualification for second round would push Derry's windfall past £400,000 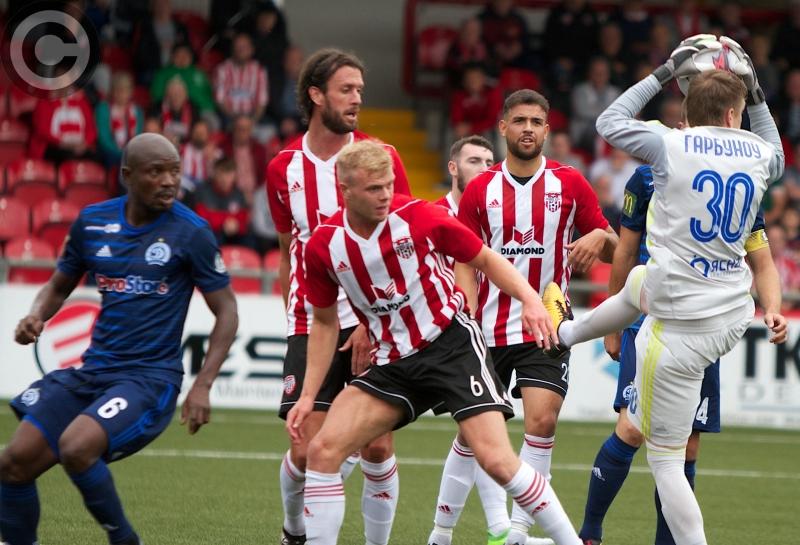 Derry City just missed out on getting into the second round in 2018/19 when they lost 3-2 on aggregate to Dinamo Minsk. (Photo - Tom Heaney, nwpresspics)

Derry City will get just over £200,000 as a result of qualifying for the Europa League in 2020 - but the really big carrot is that considerably more is on the table should they progress past their initial opponents in the first qualifying round.
With the prize-money next year expected to mirror the 2019/2020 competition, should Derry CIty get into the secondary qualifying round, they would stand to get about £224,000 (€260,000) on top of the first round payment.
And if City managed to get to the third qualifying round, the payment due would be more than £241,000 (€280,000).
According to UEFA, “each of the 48 clubs that qualify for the group stage can expect to receive a group stage allocation of £2.51m (€2.92m).”
That’s when the money really gets big, with a further £490,000 for each win.
Incidentally, the Europa League winners last year, Chelsea, got in the region of €7.3 million in prize-money while runners-up Arsenal collected £3.45m.

Achievement
But it’s very much one hurdle at a time, and to get past the first qualifying round is an achievement in itself.
A total of 94 teams are involved at this stage, with 16 of them (from the lowest ranked national football associations) having come through a preliminary round.
Of course, the Europa League cash windfall is by no means pure profit as there are considerable costs associated with participation in the competition. These can be substantial if drawn away to an Eastern European side, or a destination that may involve a number of flights, not to mention hotel accommodation and other costs.
Nevertheless, Europa League income is massively important for the qualifying clubs.
And to put it in context, with the income of the majority of SSE Airtricity League clubs falling into the £1m to £2m category, a run in Europe can make up a considerable amount of revenue for the season.
Derry have enjoyed some great forays into Europe - with the highlight of the last 20 years being the run in the UEFA Cup in 2006-2007 which saw wins over IFK Goteburg (Sweden) and Gretna (Scotland) before bowing out 2-0 on aggregate against Paris Saint Germain.
But even getting past the first qualifying round is a major hurdle.
When the draw is made, teams frequently come out that even the most ardent follower of the game may not have heard of.
And often, amongst the clubs and fans, there is a quick delve into an online search engine to find out more.
Let’s be honest, who has heard of Shakhtyor Soligorsk, Derry’s Belarusian opponents in the second qualifying round in 2014-2015, or Midtjylland of Denmark in 2017-2018?
For the 2020–21 UEFA Europa League, the associations are allocated places according to their 2019 UEFA country coefficients, which takes into account their performance in European competitions from 2014–15 to 2018–19.
It is expected that 215 teams will take part in the Europa League, with three teams from SSE Airtricity League being represented, namely Shamrock Rovers, Bohemians and Derry City. League champions Dundalk will be in the draw for the first qualifying round for the Champions League of 2020/2021.
The schedule for the competition is complicated, with a number of qualifying rounds before a play-off round, and then the group stages.
The draw will be made on June 16 next year, and Derry’s first-leg, provisionally, will be on July 9, 2020, with the second leg on July 16.