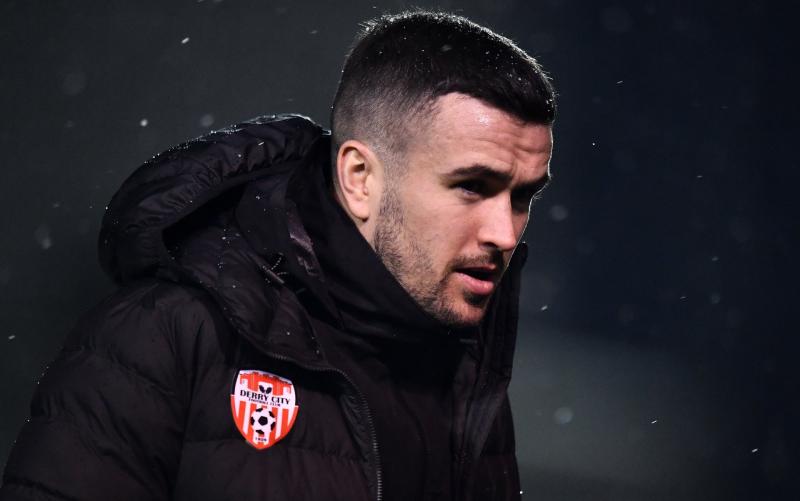 PATIENCE… Michael Duffy is yet to feature for Derry City this season. Photo: Ben McShane (Sportsfile)

Ruaidhri Higgins insists he will not take any chances with Michael Duffy’s fitness by rushing him into back into first team action.

Derry City head to Shelbourne this evening hoping to maintain their good start to the new season, but expectant fans have yet to see Duffy in action due to a hamstring injury picked up in pre-season.

The 27-year-old, who scored the winner the last time City won at Tolka Park back in 2013, has had to sit out the games against Dundalk, Shamrock Rovers and Sligo Rovers, but hopes he may feature tomorrow remain slim, with Higgins only ready to play him when he returns to 100% fitness.

“We’ll see,” he said. “It’s just day by day and trying to increase his work load. We’re definitely not going to take any chances, there’s no need for that. It’s too early to be taking chances with anybody.”

Higgins is also playing it carefully with Patrick McEleney, who made his first start of the season against Sligo Rovers on Monday past, only to be substituted just past the hour mark.

“The plan was always to start him against Sligo,” he continued. “It’s just gradually increasing his minutes and he’ll grow and get fitter and stronger from that. Regardless of how the game was going he was coming out after 60-65 minutes. He’s going to be a brilliant player for this club and we just have to be careful and manage his load.”

Higgins is now turning his attentions to the game against Shelbourne and a renewal of a fierce rivalry he knows well from his time at the Brandywell.

City have played just one league game at Tolka Park in 9 years, a 1-1 draw in 2020, a site of many classic games between the sides.

“It’s great to have them back in the league without a doubt,” Higgins said. “There’s great history in the ground and it’s a game we’re looking forward to. They’ve had a couple of decent results recently so it should be a good game.

"They’ve got good players and a really good manager and staff so it’ll be a good game and we’re looking forward to getting back to Tolka.”

Speaking after the draw against Sligo on Monday night, Higgins admitted he was content with the five-point return after three difficult games.

“All in all I think it’s a decent return,” he said. “I’m not making excuses at all, but I think Friday-Monday so early in the season doesn’t really make sense to me.

“Not everything is going to go your way all the time, so we have to accept it and recover properly and prepare now for Shelbourne on Friday. When you are taking four points from your first two you want to capitalise on that at home but it wasn’t to be and we’re unbeaten and we move on.”

Meanwhile, despite the draw against Sligo, captain Eoin Toal is at least content that Derry claimed their first clean sheet of the season against Sligo.

City managed just nine clean sheets in 36 league games last season, and that stat is one which each of the players is looking to improve on this year.

“We’ve conceded three goals in the first two games of the season so it’s good to get a clean sheet,” he agreed. “We have good options in defence.

"Cameron Dummigan is like a Rolls Royce because he can play anywhere, including centre-mid. He’s a great player and a great lad as well.

“We’re disappointed because we’re home and we should be looking to win every game at home, but we can’t dwell on that too much because we have a big game on Friday and we’re looking forward to it. It’s going to be a good atmosphere down there so hopefully we can bring down good support as well and hopefully we can get the three points.”