A comfortable home win for DC 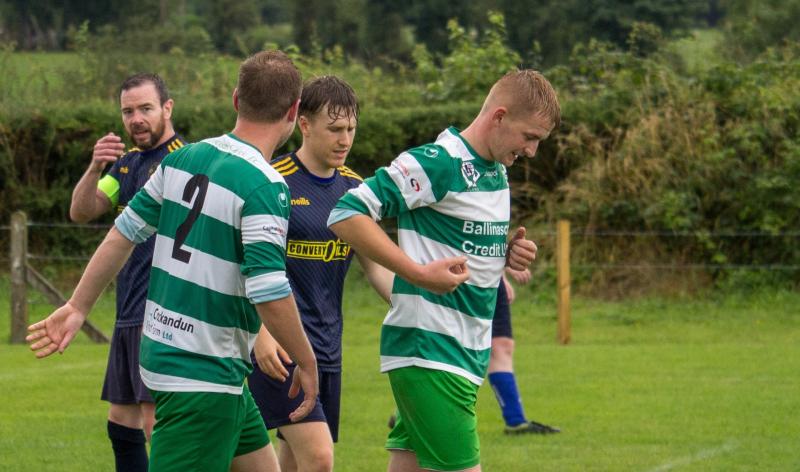 Five goals from Conor McGovern put Draperstown Celtic on their to victory at home to Maghera Strollers.

DC got off to a dream start when McGovern threaded Karl McGuigan through on two minutes and he put the ball past the goalkeeper Ciaran McCloy.

McGovern had a good chance himself only to step offside before Jonathan Irwin released the ball. On 15 minutes Niall McGlade came close to doubling the lead when he got his head to a great ball whipped in by Steven Higgins but just couldn't get power to it.

The Strollers finally got out and had a couple of corners in a row but DC dealt with them well. S Higgins came close with a fantastic left foot drive from the edge of the box and the resulting corner, delivered by McKee was powered towards goal by the head of Chris McKillion but Strollers got it cleared.

Steven Higgins had another effort, a free outside the box, well saved by the McCloy. Strollers grew into the game but DC continued to have the better chances without really threatening until, on 40 minutes, McGovern robbed the Strollers defender and rounded the goalkeeper to double the home advantage. McKillion had another headed effort saved by the 'keeper after a finely delivered free by McKee.

Niall McGlade came close again, denied by another fine save from the Maghera goalkeeper but Johnnie McKee delivered the resulting corner perfectly and McGovern doubled his tally to put the home side 3-0 up at half time.

DC came out lively in the second half, Damian McGlade whipping in a cross that worried the Strollers keeper early on. A brilliant ball from McGuigan played in Damian McGlade who broke down the line and picked out McGovern but he scuffed his finish.

McGovern converted the next chance that he got, his finish powering into the net after a ball in from Niall McGlade. Barry Grant and Ryan O'Kane were introduced for the McGlades, bringing fresh legs against a tiring Strollers.

A good ball from Hegarty played in McGovern, who poked the ball through the keeper's legs but the effort trickled just past the post. Strollers were then reduced to 10 men, allowing DC to change shape with John Higgins coming on for Irwin.

The change of shape enabled DC to press up on Strollers and meant that the defence of Steven Higgins, McKillion and McCullagh were rarely threatened as the game was drawing to an end.

However, DC didn't take their foot of the gas with McKee, McGuigan and O'Kane combining well for McGuigan to get a shot of that was well saved by the keeper and eventually turned behind. From the resulting corner, Grant rose well at the back post with his effort coming close.

McGovern grabbed another goal, this time placing the ball into the bottom corner whilst on the turn after he was picked out by McKee. DC got their sixth of the day as O'Kane set the ball for Grant, who drove straight through the middle of the pitch and played the ball wide to McKee. McKee lifted the ball to the back post, on to the head of McGovern to score again. McGovern, John Higgins and Grant had chances as the game drew to a close, finishing in a 6-0 win and giving DC a strong start in the group with two wins from two.

The next fixture for the Firsts is on Wednesday against Sperrin Athletic (6.30) at Mill Park Tobermore.