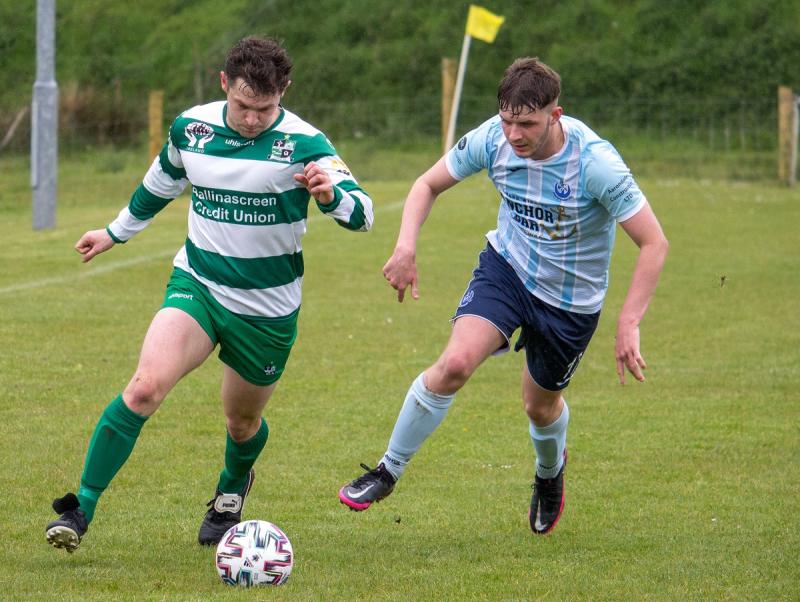 Johnnie McKee sets off on another run down the wing. (Pic: Ryan Lagan)

With Cahore currently closed for work on the pitch, the firsts made the short journey to Desertmartin FC to continue their pre season with a friendly against Portstewart FC.

The game started fairly even with both sides cancelling each other out and neither creating any real clear cut chances.

As the half progressed, Portstewart started to turn the screw a bit, but DC coped well with the pressure and in fact almost went one up when a Barry Grant free forced the away 'keeper into an excellent save at the post.

DC upped their work rate in the second half and started to take the game to the visitors a bit more.

A change in formation for the home side, combined with the visitors having a man sent off, almost paid off when Johnnie McKee rounded the keeper but couldn't take advantage and the visitors got enough men back quickly enough to deal with the danger.

The numbers were evened out when DC had a man sent off not long after and the extra space on the pitch opened the game up a bit but not enough for either side to get a winner.

A real good workout for John Glass' squad as they go in to a heavy schedule of tournaments hosted Dunloy Football Club, Moyola Park AFC and of course our own McGrogan Memorial Cup.