From the archive: Draperstown go the extra time to clinch cup glory

McLean and Bradley work their magic for DC 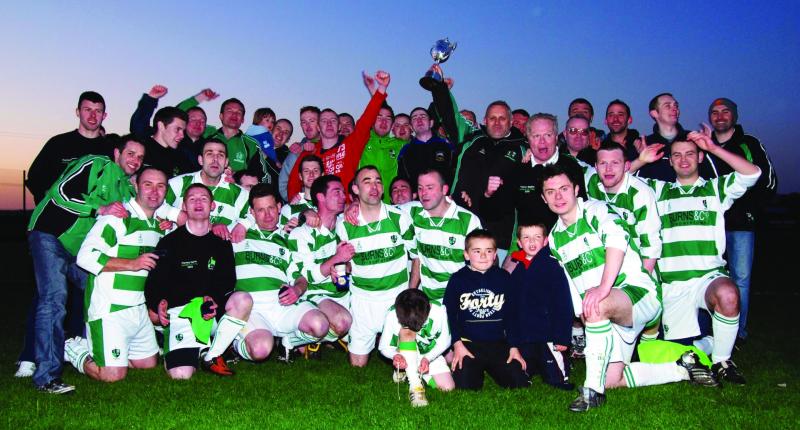 A man of the match performance from Ally McLean and an extra-time strike from Gavin Bradley clinched the cup for Draperstown Celtic, ending Oxford United's treble dreams.

They still needed a brilliant save from goalkeeper JP McConnell from Colm Logue close-range shot.

Draperstown had drew first blood when Gavin Bradley took on his man down the left. He crossed for Eamon Murray's two touches were enough for John Higgins to find the net in the 48th minute.

Oxford hit back six minutes later with a brilliant finish from Eamon Carlin. Dwayne McBrearty's cross was met by Carlin's overhead kick on the plum. The first McConnell saw of it, it was resting in the net behind him. He had no chance and it was a kick in teeth for Draperstown.

Gary Conway and Ryan Scullion were playing ten yards in front of them, with Emmett McKillion deep on the right as well. It kept Oxford at bay, but Draperstown were never going to win the game like that. They just couldn't feed their inside duo.

Darren McKillion and Ally McLean had the measure of the Oxford attack. The Derry men owned the ball, but did nothing with it.

The equaliser looked like it could've been be the catalyst for an Oxford onslaught, but the action was all at the other end.

Just past the hour mark, Murray clipped a ball to the far post for Bradley on his favoured left foot, but he dragged his shot across goal and wide.

The first half of extra time was drab and the game looked set for penalties.

There didn't really look to be a winner in it until John Higgins, stretching, swung a left boot at the ball on the corner of the penalty area. Gavin Bradley was the coolest man in the ground though as he took the ball out of his feet and fired it low past Niall Walker from 12 yards.

The last ten minutes were about kicking it as far away from their goal as Draperstown could manage. When Darren McKillion and Ally McLean needed to be heroes, they were.

Seamus Quinn came off the bench to add a steadying influence. But Oxford were always going to get that one chance. McConnell denied them their shootout with that one save.

Grab a copy of this Tuesday's County Derry Post for an extensive feature on the growth of Draperstown Celtic.