A second defeat in a week for Oxford 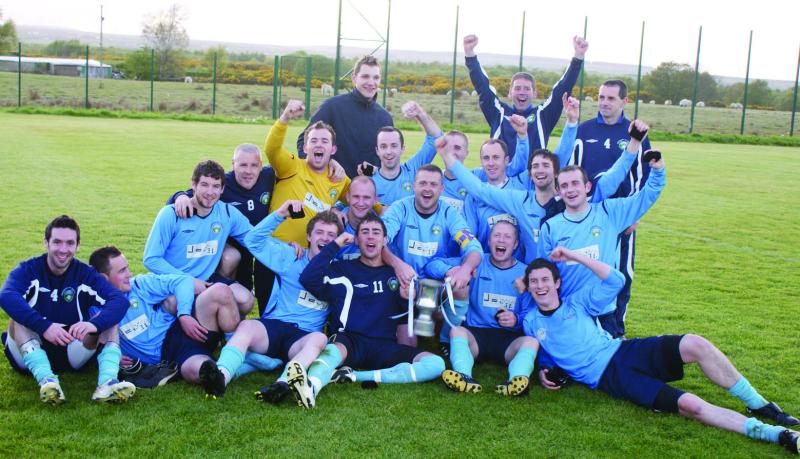 Magherafelt Sky Blues brought the Intermediate Cup back to south Derry for the second year in a row after a deserved victory over Oxford United Stars.

It was a tough week for the stars, who lost the league cup final to Draperstown Celtic the previous Friday.

Oxford dominated play for significant periods of the game, they failed to capitalise on any chances which came their way and the Sky Blues were worthy winners, retaining the cup in the process.

Magherafelt were appearing in the final for the fourth year in a row and made the better start.

Oxford had the best of the opening 15 minutes with Logue pulling most of the strings in the centre of midfield.

However, despite the impressive approach play from the city side, the end product was lacking in quality.

Magherafelt had a bit more success in the final third, with Walker having to react quickly to smother the ball at the feet of Dermot Larkin as the centre forward lined up a shot on the on the six yard line.

Things were looking ominous for Stars as Magherafelt gradually took control of the game.

Sky Blues deservedly took the lead in the 32 minute when Chris Brady sent an excellent low curling cross in from the left wing. Keeper Walker managed to get a hand to the ball but this played it into the path of an incoming Michael Collins who was able to stab the ball into the net.

With only seconds to half-time, James Bateson doubled their lead.

In the 75th minute, Oxford centre forward Paul Doran had the chance to bring his side back into the game when the ball landed perfectly at his feet following a flicked-on head from a throw-in. However, his shot went high and wide.

Frustration seemed to be getting the better of some Oxford players and midfielder Brian Rainey was sent off in the 85th minute for dissent.

Magherafelt put the final nail in the coffin with two minutes to go when Dermot Larkin curled a superb shot from the edge of the box into the right hand corner of the Oxford goal.

In the dying seconds Oxford managed to get a consolation goal when a free-kick but it was only a temporary blip for Magherafelt who made their way home over the Glenshane Pass with the cup.

- A history of Dungiven Celtic.  More...