Figueira nominated for Player of the Month award 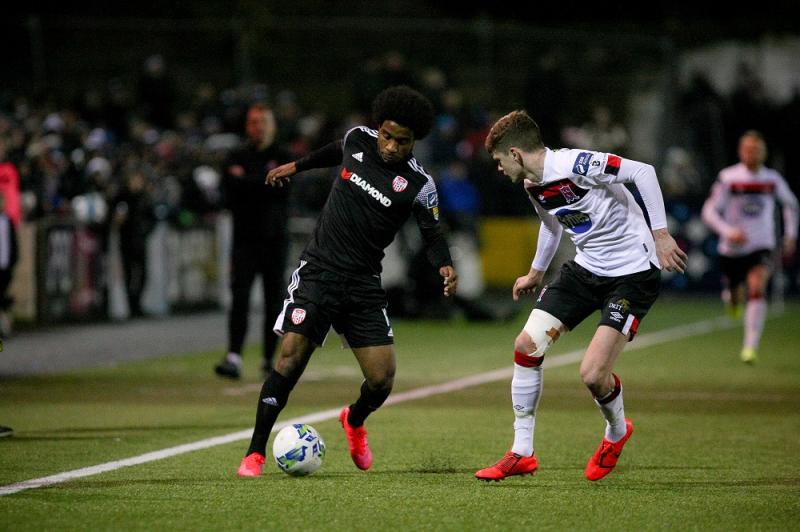 ALL EYES ON WALTER... Derry City's Walter Figueira has been nominated for the February 'Player of the Month' award.

It has been a good week for Derry City's Walter Figueira, who not only scored his first goal for the club in the victory over Bohemians, but has also been nominated for the SWAI Player of the Month award for February.
Figueira is up against Dundalk's Jordan Flores, Shamrock Rovers duo Jack Byrne and Graham Burke, Bohemians' Kris Twardek and Shelbourne's Gary Deegan. The news is no surprise to his manager Declan Devine.
“He'll be a very good player for the club and he will only get better here,” he said.
“He can give you different roles and he excites people. He's a player who can be creative and he's also got goals in him. I'm delighted for him that we have him here and I'm delighted that he's playing in a red and white shirt and not a blue shirt against us. He's up for Player of the Month and fair play to him.”
It has been a positive week overall for Devine who believes there is more to come from Stephen Mallon, and other players in the squad.
“There's more in him,” he continued.
“It was a fantastic goal and I think he had a good all-round night. He'll continue to get better; he's a very good lad but I also think we have other exciting players as well. Nilsen is only getting going and I'm telling you, he is a very good player.
“I think Adam Liddle has shown his worth, I think the competition for midfield places is good. Colm Horgan tells me at half time the other night that he'll play anywhere – that's the mentality we need.
“I think there's a lot of excitement around the group. I think Eoin Toal's performances in the three games have been absolutely sensational. Danny Lupano is going to be a fantastic footballer, and Stevie Mallon is lighting the place up at the minute as well.
“It doesn't matter what the partnerships are across the back, or midfield or up front – it's important that everybody backs each other and continues to make sure that everything is geared towards the three points.”

Reaffirmed
The manner of the victory over Bohemians last week has only reaffirmed Devine's belief that he has assembled a winning team at the Brandywell this season.
The victory over Bohs last week was the first of the season and the manager is expecting that the squad will gel together well over the coming months and prove to be a success.
“The boys are always full of confidence and the boys will always back themselves,” he said.
“The standard of training has gone up drastically and we were in a very good place. The boys are really putting the effort in on a daily basis and even on the back of a very good win at the weekend, and trained brilliantly all week.
“The togetherness of the team will continue to get better. When you think that there have been ten changes in the group – I don't feel this time last year that we were in full flow. I think we were okay, and even after that we weren't able to hit the heights of what we were able to sustain in the middle part of the season.
“I think this group will evolve and get better and the key for this moment in time is to make sure we get as many points on board as we can in the early games and then continue to strive to get your style of play and your players knowing everything about each other.
“That's pretty much impossible to do that in an eight-week period. It's a 40-week season and as the weeks go by we have to make sure that we continue to get better.”