'I'm back playing with a smile on my face' 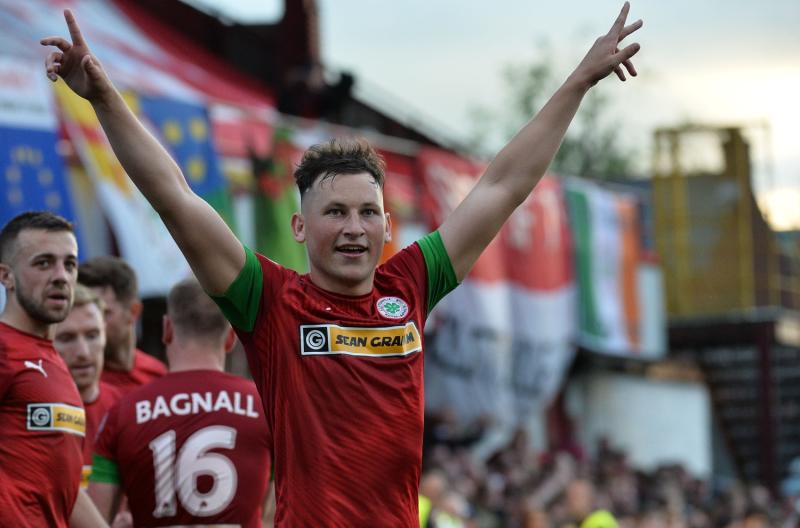 RED DEAD REDEMPTION.... Conor McDermott and his Cliftonville team mates came back from a goal down to snatch victory over Ballymena United in Tuesday night's County Antrim Shield final at Windsor Park

The dramatic scenes at Windsor Park on Tuesday night which saw Cliftonville stun Ballymena United to win the County Antrim Shield, is just the latest positive for Conor McDermott, who admits he is back playing football with a smile on his face.
The former Derry City player picked up his second senior medal as the Reds staged an extraordinary comeback, scoring on 95 and 97 minutes to take the Shield from a devastated Ballymena who were just seconds away from a memorable win.
Ryan Curran's winner sparked scenes of incredible celebration amongst the Reds, and McDermott was right in the middle of it, savouring arguably the most memorable moment of his career to date.
“It was mental,” he agreed. “We huffed and puffed throughout the game and they hit us with a sucker punch just after half time when they scored. We came out and played after that and created a few half chances but I didn't think there was that much in the game.
“I thought we battled until the end and we got our reward because we worked hard all season and it's something we can be proud of because we came through it together as a team.”
Leroy Millar's goal for Ballymena had looked to be enough for David Jeffrey's side but McDermott admits that the seven minutes of added time at the end of the game gave Cliftonville renewed hope.
“We saw the board and there were seven minutes left so that gave us a wee bit of a lift when we seen that,” he explained.
“We rallied as a group and we got the important goal which, at the time, I thought was going to take us to extra time, but then Curny popped up with a great finish to send the place mad. It was unbelievable to be honest.
“It was a sucker punch for them because obviously they have one hand on the trophy in the 95th minute and we looked down and out. But once we got the goal we got an extra 20-30% in our game and it showed when we got the goal.
“I think if the game had gone to extra time we would have won it anyway after that, but thankfully it didn't have to go that far because the old legs were starting to go a bit at that stage.”

Belief
The victory is as timely for Cliftonville as it was dramatic, with Paddy McLaughlin's team still in the hunt for the league title in one of the most intriguing title races for years.
Having lost the last two league games, the Shield victory, and the nature of it, could be the boost the club needed according to McDermott.
“It instills a winning mentality in the group,” he said. “Not many people have senior medals to their name. It's not the biggest win but to be fair in the County Antrim you're beating all the top teams; you're beating the likes of Linfield, Glentoran and Crues, so it's still important to us and it's one on the board now, and we cam focus on the league against Coleraine now on Monday. To get that win is important to lift the group going forward.”
McDermott's renaissance in Belfast continues, with the 22-year old loving his football once again.
“It's brilliant,” he said.
“I'm back playing football with a smile on my face. I'm happy. It's just about getting through games now and playing every week for me.
“I don't think I've missed many games, maybe one or two at most with injury, which is brilliant for me with my track record. That's something that hasn't been happening for a couple of years so it's good to get games under my belt. I'm back to where I was a few years ago to be honest. I feel really fit and healthy and the football is taking care of itself now which is great. The main thing for me is keeping that going and being happy.”