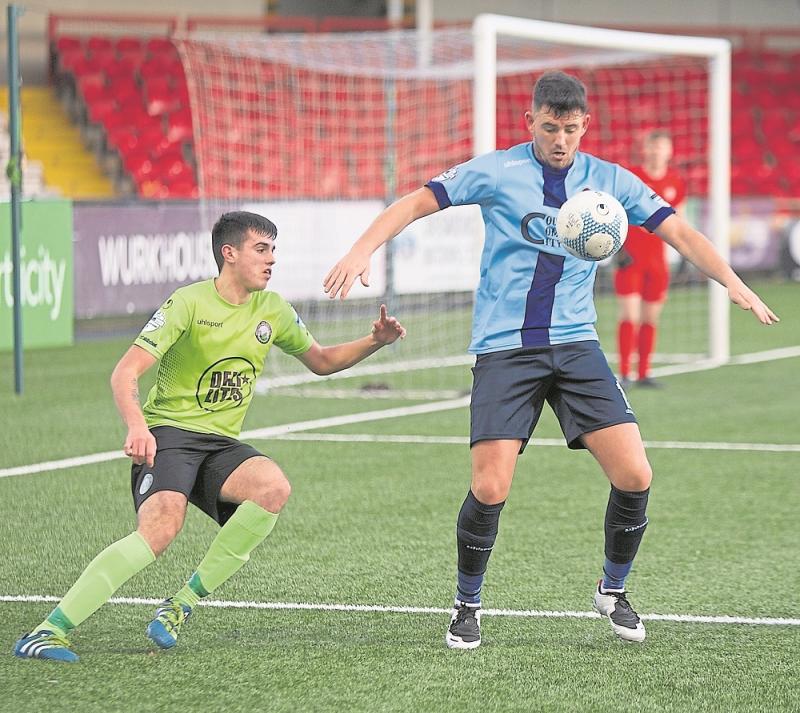 It was a frustrating day for Institute's Joe McGready. (Photos - Tom Heaney, nwpresspics)

Institute were left disappointed yesterday as they dominated against relegation rivals Warrenpoint Town but left with nothing.
Sean Connor’s men enjoyed the majority of possession and the chances from the first whistle to the last, but the only thing they couldn’t do was put the ball in the net.
In contrast, Warrenpoint had one shot over the 90 minutes, and it found the target off the boot of Eamon Scannell.
The result moves Barry Gray’s team within a point of the Derry men, and with another big game coming up at home tomorrow to Carrick Rangers – ‘Stute know they need to start getting results.

INTENT
Institute welcomed back Joe McCready from a three-game suspension, but they were without Niall Grace and Gareth Brown – who were both red carded after the 2-2 draw with Dungannon at the weekend.
It was a flat back four for the hosts, with Jack Bradley and Colm McLaughlin in the full-back positions, with Graham Crown pushed into midfield alongside Aidan McCauley. Evan Tweed and Brendan McLaughlin were on the wings, as Cormac Burke – who starred against the Swifts – picked up the number ten role behind McCready.
‘Stute started with intent, and a deflection off Emmett Bennett inside his own half fell kindly for Aidan McCauley who broke into the box, but the centre half recovered well to block the shot away for a corner that came to nothing.
The home side came within inches of making it one nil on six minutes when a superb crossfield pass from Evan Tweed picked out Brendan McLaughlin at the back post. He skipped inside on to his right foot before trying to curl it to the bottom corner, but Mark Byrne was equal to it with a diving save.
They were dealt a blow on 19 minutes when Derry City loanee Tweed was forced off with an ankle problem, with Shane McNamee subbed on in his place.
Warrenpoint had the ball in the net on 24 minutes when an acrobatic clearance from Byrne was met with a flicked header by Alan O’Sullivan for Brandon Doyle running off the shoulder of Conor Tourish, but the linesman raised his flag before the ball left the Town man’s boot.
At the other end, Brendan McLaughlin had a golden chance to put his side in the lead when Crown played a one two off McCready from a throw before dinking it into the box for the Donegal man – who had drifted between Anton Reilly and Bennett – but from ten yards out he could only head over the top.
A slick team move then ended with Burke trying an ambitious chip from the right sideline after spotting Byrne out of position, but it bounced harmlessly wide of the left upright.
Sean Connor’s men were well and truly dominating, and on 29 minutes McCready had his first chance when he beat the offside trap and raced away from Bennett to latch on to Dean Curry’s pass, but after twisting and turning in the box the striker fired straight at Byrne – with the Blues unable to do anything with the rebound.
In added time, ‘Stute came close again when McNamee showed great awareness to latch on to the loose ball down the right before fizzing a cross across the face that was just inches away from the boot of the incoming McCready.
The first period was played almost entirely in Warrenpoint’s half, but a combination of some poor finishing and decision-making, and some bad luck, meant that ‘Stute went in frustrated, and level, and the break.

‘Stute picked up where they left off with a shot on target off the boot of Cormac Burke inside the first minute, but it was never troubling Byrne from 30 yards.
Joe McCready flashed one wide from a tight angle before passing up a huge chance on 55 minutes when Burke’s first-time ball across the face found the striker completely free at the back post, but he skied it over off his weaker left foot.
Mark Byrne was thanking his lucky stars seconds later when he completely misjudged the bounce on a long Colm McLaughlin pass, but as it evaded the goalkeeper with McCready closing in, Warrenpoint captain Daniel Wallace was alert enough to get across and clear.
Burke found the chest of Byrne once again with a half volley on the hour mark before, out of nowhere, Lorcan Forde found himself through on goal but took too long to get the ball down and Dean Curry hacked it away.
The game flipped on its head on 64 minutes when, completely against the run of play and with their first shot on goal, the visitors took the lead. It was the simplest of goals too, as O’Sullivan pulled out to the right wing before driving a ball in that Eamon Scannell, in acres of space, finished from seven yards.
The home side thought they had levelled matters two minutes later when McLaughlin nodded McCauley’s dinked pass over Byrne, but the flag was raised for offside.
‘Stute continued to enjoy a lot of the ball in the final stages, but they couldn’t fashion any chances as Warrenpoint took a huge three points back home.