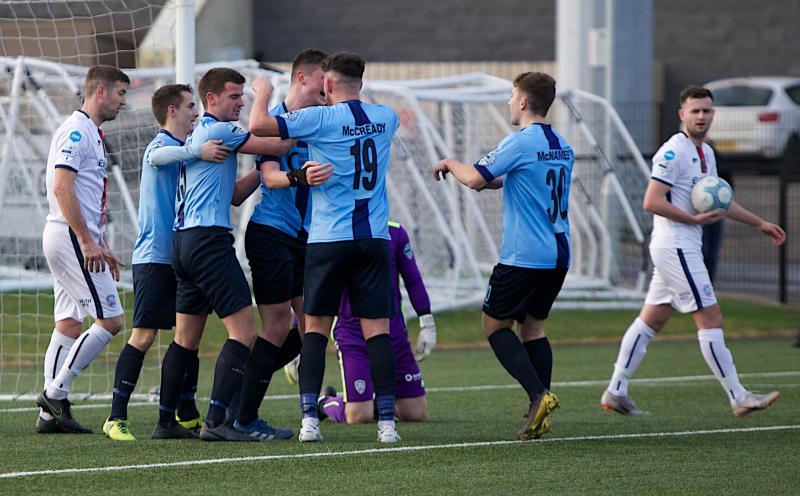 Institute manager Sean Connor hailed his players after an impressive north west derby win over Coleraine on Saturday.
The Bannsiders came into the game as league leaders, while ‘Stute were looking to bounce back after a mid-week defeat to Glenavon.
They showed no signs of fatigue, however, as they dominated from start to finish in every area of the pitch. Shaun Leppard opened the scoring on 19 minutes before a superb 45-yard finish from Gareth Brown sealed the result with less than half an hour played.
“I’m delighted. I said to them afterwards that that win has been coming, possibly here against Glentoran, maybe away to Crusaders – so that’s a well-deserved win,” Connor told the Derry News. “It didn’t happen over the 90 minutes, it happened over the last five or six weeks and it’s a big, big boost.
“For us, it’s always really important to get the first goal because it gives us a bit of momentum, and it rocks them. Coleraine came here top of the league, they’re a really good side, but we were well prepared. We knew what they were going to try to do and we stifled that. Within that it creates weaknesses in their team and we exploited the weaknesses and score two good goals.
He continued: “I think the big difference was that we went two goals up. I think since I’ve been here we haven’t shown the capacity to concede a lot of goals, so I was very, very confident at 2-0. I’d have liked a third to see it out, but I thought the second half was composed and controlled, and we did what we had to do.”
The manager also praised the fans for their support, and stated that the win will send a message to the rest of the league.
“It’s really good for our supporters because I think since we’ve come in we have shown a bit or grit and determination, and it’s always nice when you get three points – it makes it worthwhile coming.
“I’ll go home and have a nice weekend, and everybody goes away the same. It’s the power of football and the power of a win, and it also has teams around us looking and seeing Institute have beaten Coleraine.”
The games are coming thick and fast for the Blues, and next is a trip to Seaview tomorrow to face Crusaders in the League Cup semi-final. For Connor, they go into the game with real confidence.
“This puts me in a good mood for now, and now the homework starts for the next game. I’m always in a good frame of mind about whatever match is coming next, but I have a lot of work to do in terms of analysing Crusaders and what we’re going to do against them,” he explained. “I’ve also obviously now got a headache in terms of team selection because there’s four players missing today who would be regulars. Two of them will be back from suspension – Ryan Morrow and Aidan McCauley – and then Dean Curry and Niall Grace who were carrying knocks and that we decided not to risk today.”

TENTATIVE
It was an even start to the game from both teams, but it was former Institute and Derry City midfielder Ben Doherty who had the first sight of goal on seven minutes when he was slipped in down the left by Jamie Glackin, but Shaun Leppard got across well to block the goal bound shot from just inside the box.
The visitors had another sight at goal when a high ball wasn’t dealt with by the ‘Stute defence and James McLaughlin struck it cleanly at the second time of asking, but this time it was Conor Tourish who put his body on the line to deflect it behind.
In response, the Blues put together a fine team move on 16 minutes when Jack Bradley did brilliantly to dispossess Jamie Glackin before launching a counter. Joe McCready picked it up on the right wing and whipped a scintillating pass across the face of goal, but it was just too far ahead of Gareth Brown.
Glackin then beat the offside trap as Coleraine started to find their rhythm, but after his cross was headed into the path of Doherty by Tourish, the winger struck it just over the bar off his weaker right foot.
Sean Connor’s team shocked the league leaders on 19 minutes as they made the first breakthrough. Joe McCready won a free on the left side and Evan Tweed delivered a lovely cross for Leppard to volley home from five yards out, completely unmarked.
It filled ‘Stute with confidence, and further efforts from McCready and Stephen Curry – a late addition to the team following an injury to Niall Grace in the warm up – stung the gloves of Chris Johns.
The home side were well on top as Coleraine players showed real signs of frustration, and they doubled their advantage on 28 minutes in some style when Brown picked up the ball just inside the Bannsiders half, spotted Chris Johns off his line and dinked him beautifully from all of 45 yards, with the goalkeeper left helplessly on his backside as Brown celebrated.
He was causing Oran Kearney’s men serious problems, and he had strong appeal a penalty on 33 minutes when he skipped away from Mullan too easily before he appeared to be scythed down by the centre half, but Steven Gregg waved away the claims.
‘Stute could have could in 3-0 up at the break when a route one clearance from Rory Brown was headed on by McCready into the path of Brown who broke straight through the heart of the Coleraine defence, but his snapshot sailed wide of the right post before Johns was forced to palm a McCready attempt over the top.

To try and add more attacking impetus, Oran Kearney made a substitution at half-time, with centre half Steven Douglas replaced by striker Ian Parkhill.
Still, it was the home side who picked up where they left off as they cut through the Bannsider defence before McCready drilled a shot just wide of the left upright.
At the other end, Parkhill tried his luck on 54 minutes, but Brown had it covered as the ball whistled wide – with the ‘Stute shot stopper still waiting to be tested.
It was a much more tepid second half, but Coleraine should have pulled one back on 71 minutes when a long free from Johns saw Leppard and Eoin Bradley tangle 30 yards from goal. It left a gap in the Stute defence, and Doherty slipped through Parkhill in behind Jack Bradley, but with just Brown to beat he tried to place it in the top corner but instead curled it over the top.
Time was running out and it showed in Coleraine’s play with 15 minutes to go when pinball on the edge of the box ended with Doherty scooping over on the turn rather than squaring it to the completely free Bradley eight yards out to his left.
Kearney’s men had their first shot on target three minutes later when Maciulaitis this time found himself in space inside the area, but his eventual effort was weak and straight into the arms of Brown.
Five corners in the final ten minutes of the game still wasn’t enough for Coleraine as they struggled to win a single 50/50 ball against the more determined, collected and impressive ‘Stute, and when Ben Doherty rounded Brown but fired wide at the death it summed up the visitors’ day – with Connor’s men cruising to the three points.