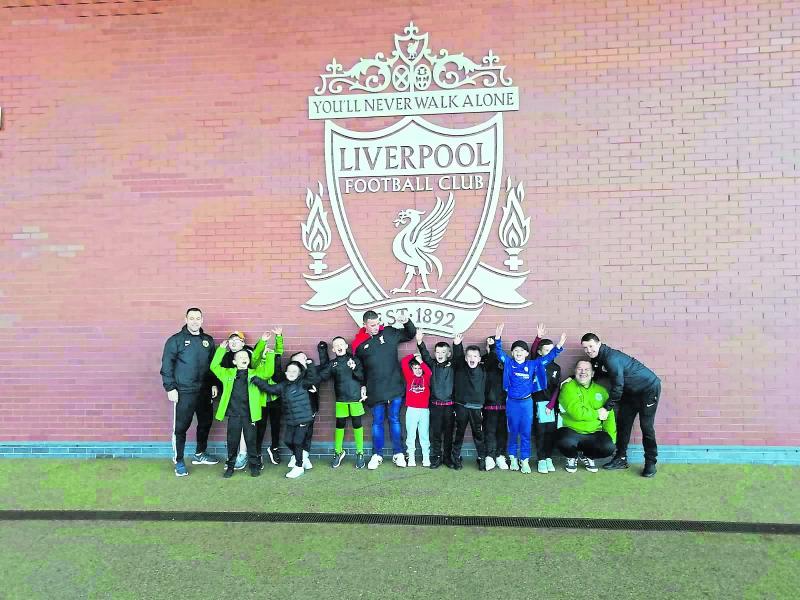 The Harps players pictured outside Anfield

Foyle Harps youngsters had a weekend to remember as they travelled to Liverpool for a trip that had everything, even a brief appearance from Mo Salah.

The weekend began with a tour of Goodison Park, home of Everton FC where the Harps players enjoyed a stadium tour before they took part in a coaching session with renowned coach Tom Owens. 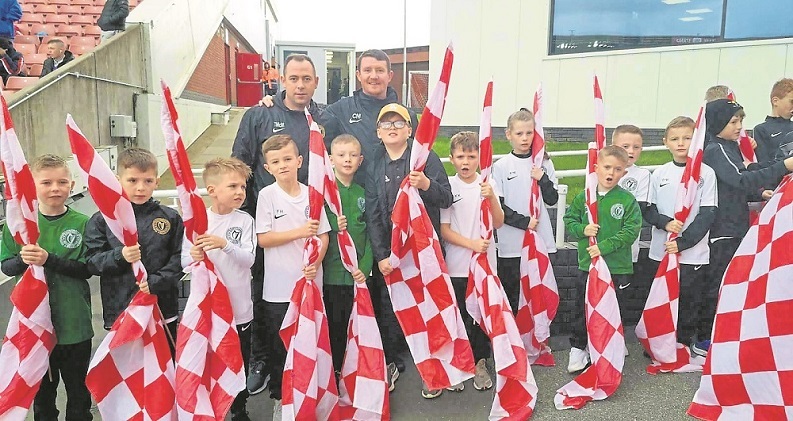 The Harps youngsters were flag bearers for the game between Stoke City and Fulham on Saturday.

The Harps players were really looking forward to getting down to action however and their first game of an enjoyable weekend came against Hypton Madrid, which turned out to be a real thriller which produced eleven goals. At the end of a fantastic game Harps emerged victorious on a 6-5 scoreline reason, with four Harps players getting on the scoresheet.

Cian Mooney scored a brilliant hat trick while Dermott Mitchell, Bobby Mooney and Rhys McLaughlin all chipped in with one apiece.

The adventure was just beginning for the Harps youngsters however as early on Saturday morning they took part in a session coached by Liverpool FC’s Academy coaches, where they picked up some key lessons on improving their game.

After they were put through their paces by some of the finest coaches in the country, Harps travelled to the Britannia Stadium to watch James McClean’s Stoke City take on Fulham.

Before the game the kids acted as flag bearers on pitch side and while it has been a difficult season for Stoke, the Derry team proved to be a good luck omen as they won three vital points with a 2-0 victory.

Come Sunday, the Harps’ youngsters were to take in a tour of Anfield, but on the way they passed by Liverpool’s training ground at Melwood where they were amazed and delighted to catch a glimpse of world class forward Mo Salah, who was doing a fitness test whilst his team mates were just down the road preparing for their game at Old Trafford against Manchester United.

The final game of the weekend came against Croxteth Tigers who used to have a certain Wayne Rooney on their books many years ago. It was another high-scoring performance from Harps, with Cian Mooney again getting a hat trick while Dermot Mitchell again scored with Josh Harkin also chipping in with two goals.

Foyle Harps would like to thank BWSC and Lisahally Powerstation for their generous sponsorship of the team.