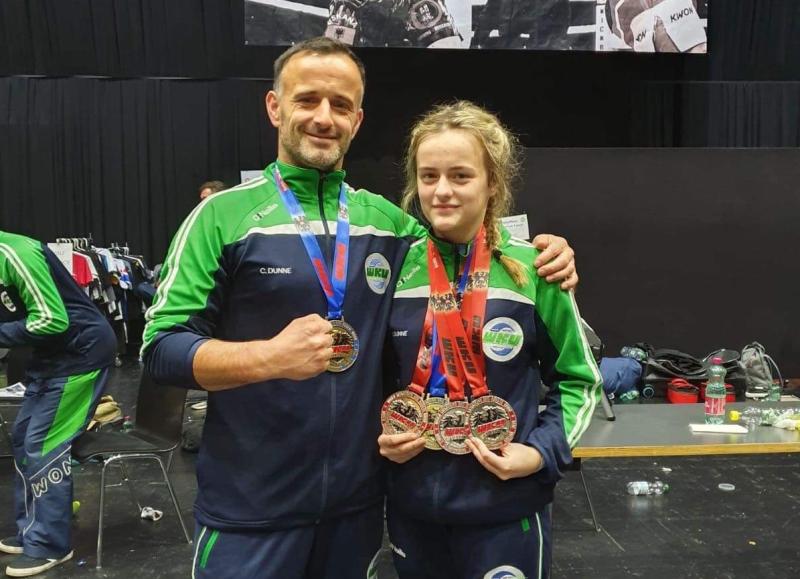 Dungiven kickboxing duo Caitlin and Christopher Dunne are once against grabbing the headlines and winning five medals on the world stage.

Caitlin and her daddy Christopher, from Titans kickboxing club in Limavady, travelled to WKU world championships in Bregenz Austria as part of the Northern Ireland team.

Christopher got a bronze in his light contact, while Caitlin won bronze in her points section and fought her way to three finals.  She received silver in kumite and a silver in team events.

“Caitlin fought an unbelievable final in her light contact against a 17 time world champion and with a split decision against her German opponent she received silver,” commented her mother Shiree.

“It is one of the biggest competitions in the kickboxing world with over 2000 starts and 39 countries.”

Christopher and Caitlin are both back in the gym four days a week training hard for the next worlds in Canada next year hoping to bring home the gold.

They are no strangers to success overseas.  Earlier this year, returned home as champions from the recent World Open Kickboxing championships on Orlando, Florida.

Caitlin’s rise to the top has been a rapid one, having only begun her career in November 2015, before entering competitions across Ireland early the following year.

Her first breakthrough came in April 2017 when she was a crowned British champion for the first time.

Buoyed by the confidence and sustained preparation she took the kick-boxing circuit by storm and was placed in ‘almost every’ competition – including the German Open and the Mugendo Open in Sligo.

Last year, Caitlin became European champion for the first time and has went from strength to strength in the early part of 2019 with 20 medals amassed across eight competitions.

Caitlin is a two time national and British champion as well as the holder of three world junior titles.

She is a pupil of St Patrick’s College Maghera, and earlier this year Paul Hughes, Head of Sport, paid tribute to her achievements.

“It’s great to see Caitlin getting on so well in her sport.  It is fantastic to see physical activity among girls in the area and the school in particular,” Hughes told the County Derry Post.

“It shows what can be achieved with dedication, perseverance and hard work.  They are the key things to bring to any level of sport.  This is what Caitlin will bring to the world stage.”

If any local businesses would be interested in sponsoring Caitlin to fulfil her dream next year can you please email dunnechris32@yahoo.co.uk.