It may well be a tad bit on the cold side these days, but the dry, chilly but crisp air means that the Brandywell Track is ideal for fast times and this was certainly the case on Monday night. 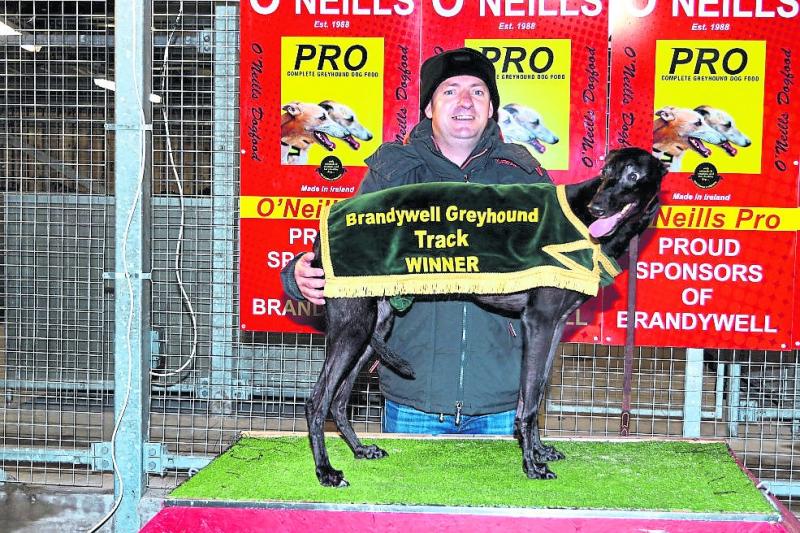 It may well be a tad bit on the cold side these days, but the dry, chilly but crisp air means that the Brandywell Track is ideal for fast times and this was certainly the case on Monday night.
The eight race card produced some thrilling action with the feature race being the Brandywell Novice Sprint Final.
Tully’s Girl did the business for John McMenamin as she produced a great run to win in 16.85 out of trap one.
The opening race of the evening saw Titanic Tip clock 16.90 while in the second race, the Gerard Patterson owned Hanora’s Flash raced out of trap one to win in a time of 16.95.
In the first contest over the 500 yards distance Coolatee Molly had an excellent run to set a fine time of 27.68.
Indeed, Coolatee Molly has now won 15 races in 37 starts, and has had 13 seconds and three thirds.
The fifth race saw another good run with Fleetwood Fagan going over the line in 27.97 while Hurry Miss lived up to her name with a fast 27.78.
The penultimate race was won by Blue Eyed Bonny in 28.58 while yet again the final race of the evening saw success for Vincent McGuinness and Juliet Aldridge with Ciara’s Rocket surging to success in 16.86.
In other greyhound related news, the Irish Greyhound Board’s annual report for 2018 has been published.
Elsewhere, Galway man Des Kelly- the Hospitality Manager at Galway Greyhound Stadium- ran his first full marathon last Sunday in aid of the Irish Retired Greyhound Trust (IRGT). He did the Dublin City Marathon in 4:55.47.
Meanwhile, Drumbo Park is now hosting two meetings a week, on a Saturday evening and it also has a Sunday Family Friendly Race Meeting. The second meeting is helping to facilitate owners trying to get racing for their dogs. Given the closure of Lifford Greyhound Stadium in August, it will be interesting to see what support the second meeting gets at Drumboe and whether it attracts much interest from the north-west.
Last weekend’s Jackie McCann Memorial was won by Meenagh Maverick in 28.30 for Michael Corr, with his other dog Meenagh Maestro finishing second.