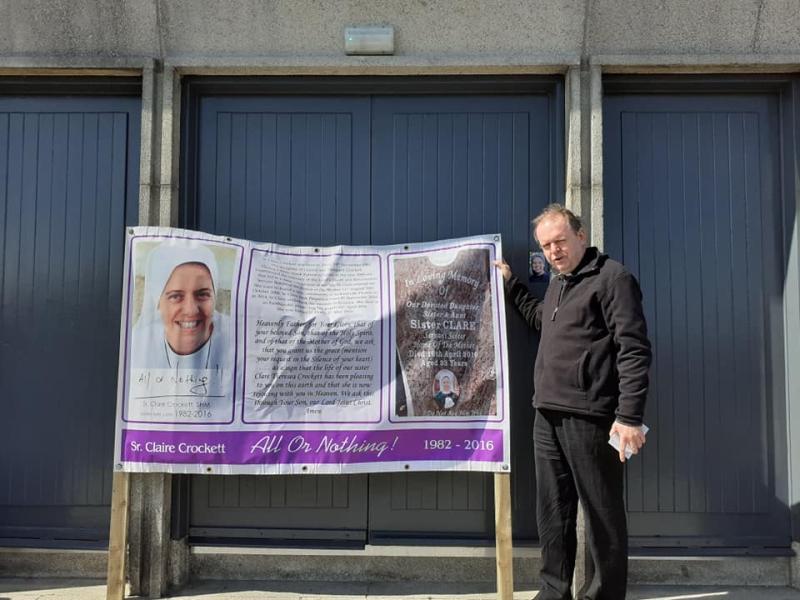 A banner in memory of a young Derry nun has been taken to churches in Derry to mark the  fourth  anniversary of her death.

Sister Clare Crockett was just 33-years-old when she died in the stairwell of her school in Equador as she attempted to guide five girls to safety during an earthquake on April 16, 2016.

Since her death many people from across the world have begun praying to her and her grave in the City Cemetery has become a place of pilgrimage.

In recent weeks, her photograph has been displayed  in the windows of homes across Derry, as people pray for her intercession during the coronavirus pandemic,

A novena prayer to Sister Clare Crockett, which was written by her holy order, Servant Sisters of the Home of the Mother, is also said to be bringing great comfort during these uncertain times.

Her anniversary mass was held by Carmelite Priest, Fr Stephen Quinn, at Termonbacca last month  and was broadcast on its YouTube channel to over 3,000 people.

"People who haven't been to mass in years tuned in to YouTube and Facebook to watch her mass," said Sean Gallagher, who helps run a novena prayer group in her memory.

Mr Gallagher and Patsy McCallion decided to take her banner around various churches in the city, whose doors remain closed due to the coronavirus crisis.

"We took it up to Termonbacca to see Fr Stephen and then we went to see Fr Joe Gormley in St Mary's in Creggan and then it just went on and on," explained Mr Gallagher.

"This year more than any other Sr Clare has been catapulted into the limelight.

"More people are praying to her than ever before.

"Before the coronavirus there was a woman who came all the way from Poland to visit Sr Clare's grave.

"She said 'you just don't realise how special this woman is'.

"So many people are looking for her photograph and Novena we just can't print them fast enough."

In recent weeks Sister Clare's sisters, Shauna Gill and Megan Nicell, have travelled around the city delivering hundreds of photographs and novenas to houses and local shops.

Sister Clare was a self confessed party girl with a promising show business career in front of her when she joined the Servant Sisters of the Home of the Mother at just 17.

Since her death several miracles have been attributed to her and calls have been made for her to be made a saint.
"The miracles are working all the time," said Mr Gallagher.

"We should be shouting from the rooftops about her.

"This is our saint - she was a wee woman from the heart of the Bog.

"I hope she is made a saint sooner rather than later.

"It is something that can take hundreds of years but I hope to see it in my lifetime.

"I was talking to a young woman recently who had a picture of Sr Clare in her window.

"I asked her about it and she said she got it from the chip shop in Rosemount.

"She told me 'I don't pray but I chat away to that wee nun every day'.

"That is a small miracle in itself.

"At this time more than ever people are putting their faith in her.

"She is moving young people because she was so young."

To see the full length film about Sister Clare's life search for 'All or Nothing: Sister Clare Crockett' on YouTube
A mass in memory of Sister Clare  takes place on the second Sunday of every month in Termonbacca at 7pm.