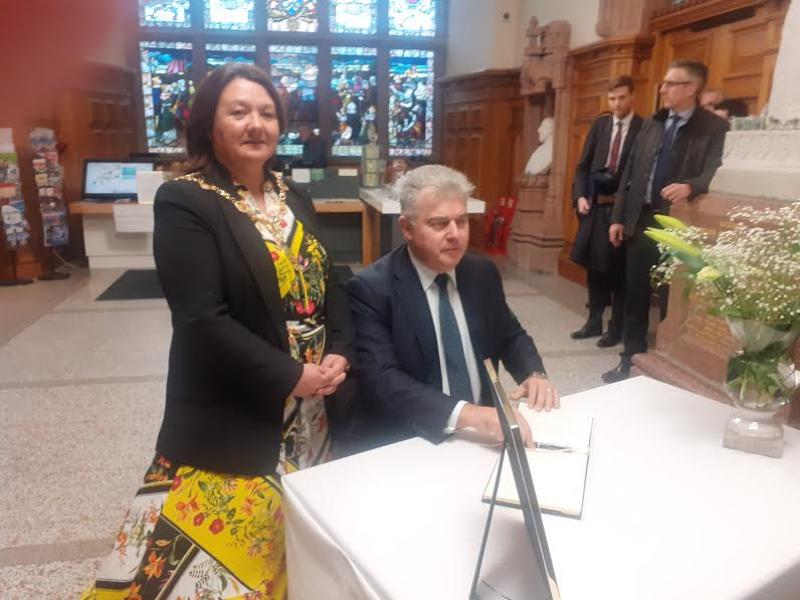 Secretary of State Brandon Lewis signing the visitors' book in the Guildhall. Looking on is Mayor Michaela Boyle.

New Northern Ireland Secretary of State, Brandon Lewis, has made his first visit to Derry since taking up the post.

During his visit, he met with business leaders and politicians, including the Mayor, Michaela Boyle, John Kelpie, chief executive of Derry City and Strabane District Council, SDLP leader, Foyle MP Colum Eastwood, and the Unity of Purpose group.

Speaking after their meeting, Mr Eastwood said a number of issues were raised including Brexit and the delivery of the medical school at the Magee campus of the University of Ulster.

Sinn Féin spokesperson and former MP. Elisha McCallion. was part of the Unity of Purpose group.

She said:  "We impressed on Mr. Lewis the imperative that the British Government keeps to the promise of its commitments towards Derry and the North West contained in the New Decade, New Approach document.

"I pointed out to him the need for delivery of the financial investment promised in the document to the expansion of Magee and other projects that have been neglected for decades.”

After a brief meeting with the media outside the Guildhall, Mr Brandon walked the Peace Bridge to St Columb's Park to meet a number of community groups.