The Specialist Academy, the joinery and craft apprenticeship training facility, at Specialist Joinery Group, Maghera, has been awarded an “Innovation Award” at the National Apprenticeship Awards, held by the Department for the Economy on 6th February. 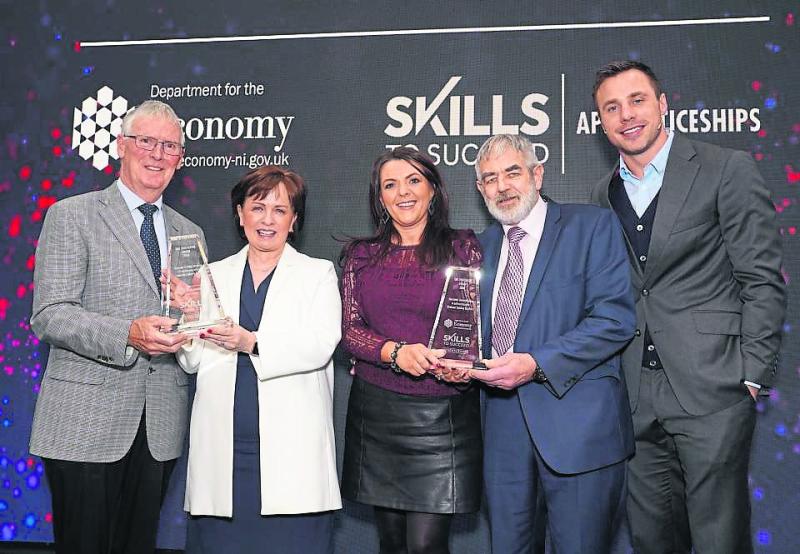 The Specialist Academy, the joinery and craft apprenticeship training facility, at Specialist Joinery Group, Maghera, has been awarded an “Innovation Award” at the National Apprenticeship Awards, held by the Department for the Economy on 6th February.

The academy which offers an NVQ level 2 & 3 training programme in Carpentry & Joinery accredited by City & Guilds, was founded in 2014, opened it’s own facilities in 2015 and is currently recruiting for their 2020/2021 intake of Apprentices.

The company’s investment in the Academy has topped £1 million pounds over the past 5 years and includes it’s own small scale production facility, IT suite and Canteen. The programme strictly limits their intake of Apprentices to a maximum of 8 per academic year. This enables the tutors to deliver a student centred programme which is tailored to individual needs and learning styles.

The award was made to both Specialist Joinery Group and partners STS who provide accreditation through the City & Guilds Framework. Over the past 18 months both organisations have successfully collaborated to develop a bespoke programme by combining City & Guilds Syllabus, with company operating procedures and new digital technologies.

This is not the first time that the Academy’s success has put Specialist Joinery Group in the spotlight. Group Facilities have recently been showcased nationally, as part of the FSB Apprenticeship Week Promotional Campaign and during Pope Francis’ visit to Ireland in 2018 the company was featured on RTE1’s Nationwide programme.

The business played a key role in the island’s preparations for the visit of Pope Francis, which involved the crafting of a Holy Icon depicting the Holy Family and the design and manufacture of the sanctuary furniture used by Pope Francis when celebrating mass at Phoenix Park.

Speaking about the impact of the Academy, Company Founder John O’Hagan said “The Academy has had a great positive impact by promoting a culture of learning, collaboration and knowledge sharing within our group.”