Rainey at the double with weekend wins

The First XV sit top of the league after six games. 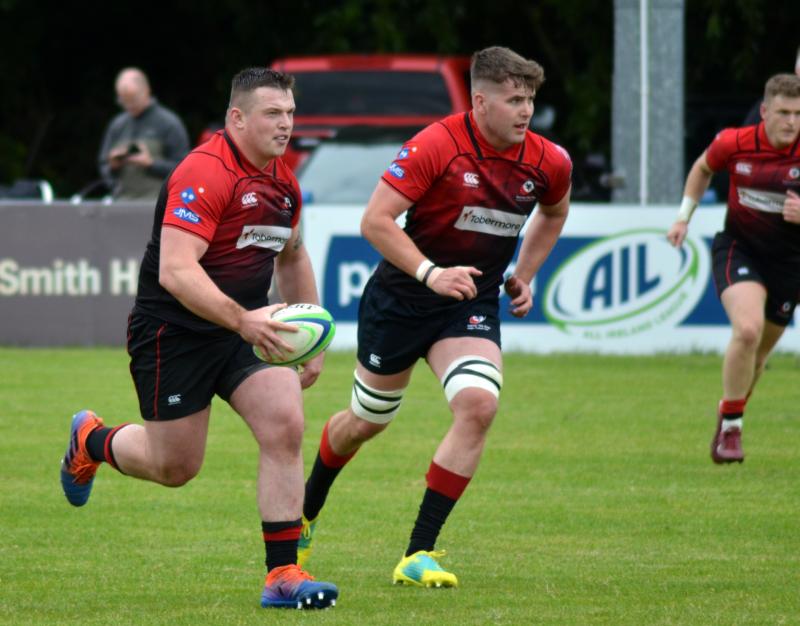 Captain Tommy O'Hagan heads for the line in Rainey OB First XV's win at the weekend.

Rainey Old Boys had a good day at the office on Saturday, away to Belfast Harlequins.  In a double-header, both 1st and 2nd XVs came away with victories to extend the club’s unbeaten run to 6 from 6 this season.

Both teams played well and deserved their victories, but even the most ardent Rainey supporter would concede there are areas of their games to be worked on.

In beautiful sunny conditions and on an immaculate pitch, Belfast Harlequins and Rainey Old Boys had their first of a minimum of 3 encounters this season, with Rainey gaining an early psychological advantage as they ran out 26-36 winners at Deramore Park.

The game had barely gotten underway before Rainey were on the scoresheet, as full-back Faiva scored a spectacularly acrobatic try in the corner. Out-half McLean added a conversion of equal quality from the touchline and Rainey were 7 points to the good.

Having dominated for the first 20 mins, Rainey then appeared shell-shocked as the game suddenly switched in Harlequins’ favour.

In the space of 5 minutes, they conceded two soft tries, as first the Quins’ out-half and then the scrum-half crossed the whitewash – both attacks starting far from the Rainey line.

When No8 Erasmus was then shown yellow for a high tackle, things were not looking good for the Magherafelt men.  It fell to Club Captain, Tommy O’Hagan, to settle the ship.

Catching a poor kick-out above his head, and outside the ’22, the big prop decided some direct action was needed, and set off in a straight line for the posts.

He bullocked his way to the line, battering opponents from his path, before defiantly slamming the ball down over the whitewash. When McLean slotted the conversion, to retake the lead, the momentum seemed to be with the visitors.

Harlequins had other ideas, and retook the lead with another long range try, followed by a superb conversion.  Anticipating the half-time whistle, they were in turn caught out as Rainey surged downfield, with the move ending when Centre Brown went over in the corner.

McLean was unlucky with the conversion attempt, bringing the half to a close with the crowd breathless and honours even at 19-19.

Starting strongly in the 2nd half, Rainey applied concerted pressure, while attempting to move ball around.  Faiva made a good break before releasing Jeffers, but the winger cut inside, and the move broke down. Quins then lost a player to the bin for a high tackle and Rainey swiftly took advantage with the forwards forcing Michael McCusker over the line.

A great break by Brown then tore the home defence apart, a sublime offload releasing Jeffers in the middle of the park.  He sprinted for the line, but was hauled down just 10m short.

A quick ruck, and Faiva was on hand to break left and dive over for his second score of the day.

Harlequins were far from finished however.  From a lineout outside the home ’22, backrow Neal Hastings took a great steal to allow the forwards to set up a maul.

With the McCusker brothers to the fore, they manoeuvred relentlessly forward, the ‘Quins’ best attempts to legally prevent a score coming to naught, and offering the referee his choice from a number of penalty offences.

Again, they attacked, with John McCusker and Quinn carrying well, but Harlequins stole the ball and their fullback ran the length of the pitch to score. The conversion reduced the deficit to just 3 points and with 15mins to go, it was game on.

Sixteen artists from both city and county have been long listed.

Back came Rainey, and when Jeffers flicked an offload to Neal Hastings, he was able to sprint in unopposed to score in the corner. McLean landed another great conversion and with the clock ticking down, Rainey launched one final attack down the right wing, centres Hall and Brown linking well to make good ground.

They won a 5m scrum, and although Brown crossed the tryline, he was unable to ground the ball.  With the referee calling time a few minutes later, Rainey had earned another bonus point win and now sit atop Ulster Rugby Premiership Division 2 with 3 rounds played.

Kicking off against a heavier and more experienced ‘Quins IIs, Rainey’s second string coped well with early pressure, their defence more than a match for the home team.

Both sides exchanged attacking chances, but it was Rainey who drew first blood after 15 mins, when a visit to The Quins’ 22 earned them a penalty, ably converted by Pollock.

A good catch by McErlain from the restart allowed Evans to break from his own ’22, sidestep the defence and outpace everyone to score under the posts. Pollock added the extras.

However, Quins hit back immediately, with some poor Rainey tackling eventually leading to a converted home try.

Forcing a turnover from the restart, good carries from Montgomery and McCullough up the middle allowed the backs to send the ball right and draw the defence.

When the ball went left again, McCrum was wide open and he had the gas to make if from halfway to score under the sticks.  Pollock was on target once more, with the aid of one of the uprights, and Rainey were 7-17 to the good. 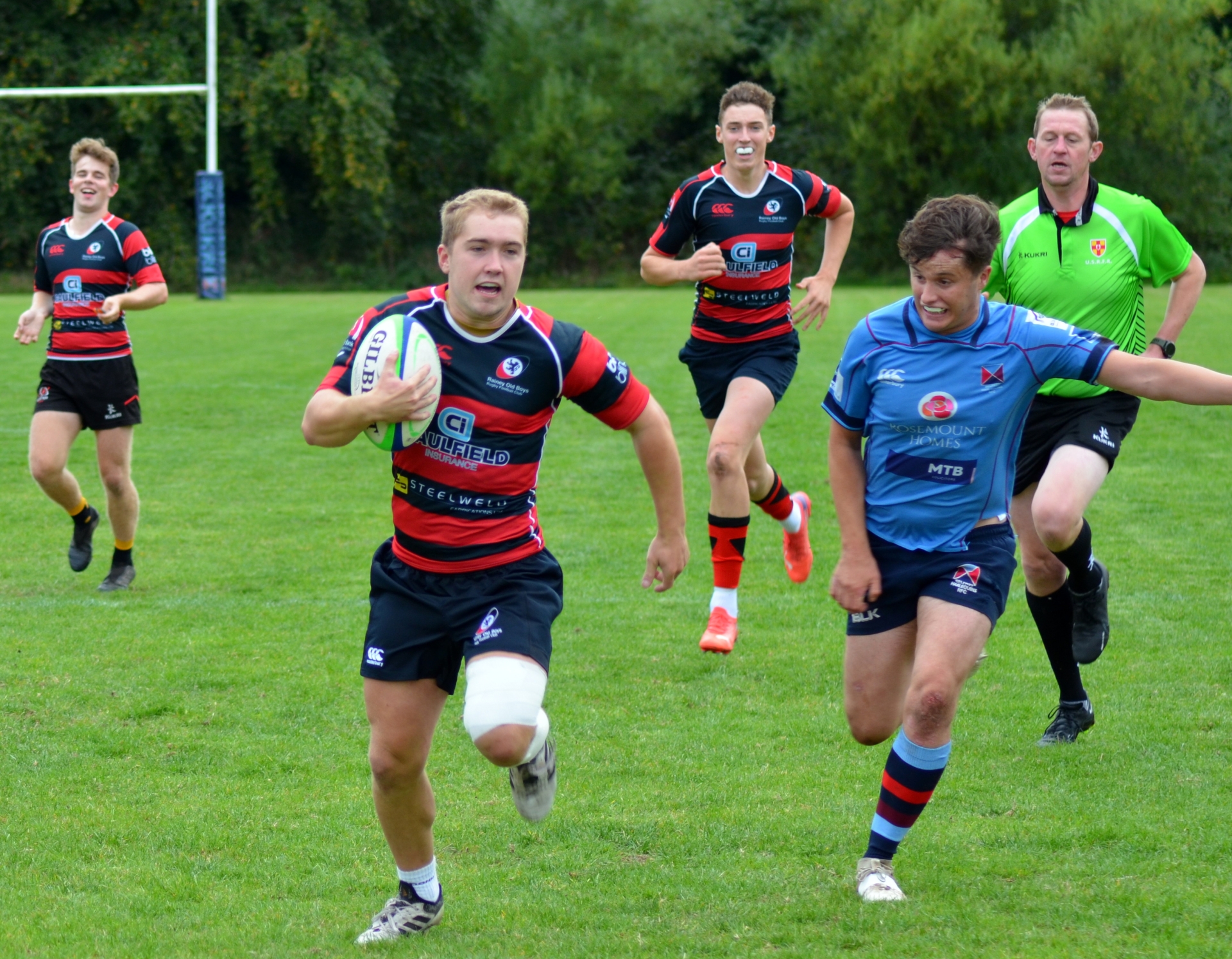 Harry Evans scored two tries for the Second XV at the weekend.

Their lead was to be short-lived, with Quins soon storming downfield once more. The Rainey defence did well to stymie them through multiple phases, but eventually they forced their way over the whitewash and with the conversion added, reduced the deficit to 3 points.

Reduced to 14 men when Gordon was harshly sin-binned for not rolling away, Rainey did well to keep Quins at bay for the remainder of the half.

10 mins after the interval, a strong carry by Montgomery allowed Evans to release Hall on halfway. Sprinting through the defensive line, he made it to the Quins’ 22, before dummying the covering winger and feeding the ball back to the supporting Evans on the 5m line, giving him an easy run-in under the posts.

Pollock made no mistake with the conversion once more. A crunching tackle by Bergeron then led to a turnover by McClelland and a superb 50-22 kick by Pollock gave Rainey an attacking lineout.

With Rainey repeatedly driving for the line, the referee binned a Quins player for use of the boot in a ruck, but Rainey also suffered a blow when prop MacErlain was forced to retire.

With the scrums now uncontested, the only advantage Quins had was neutralised, and Rainey were quick to make use of the extra man. 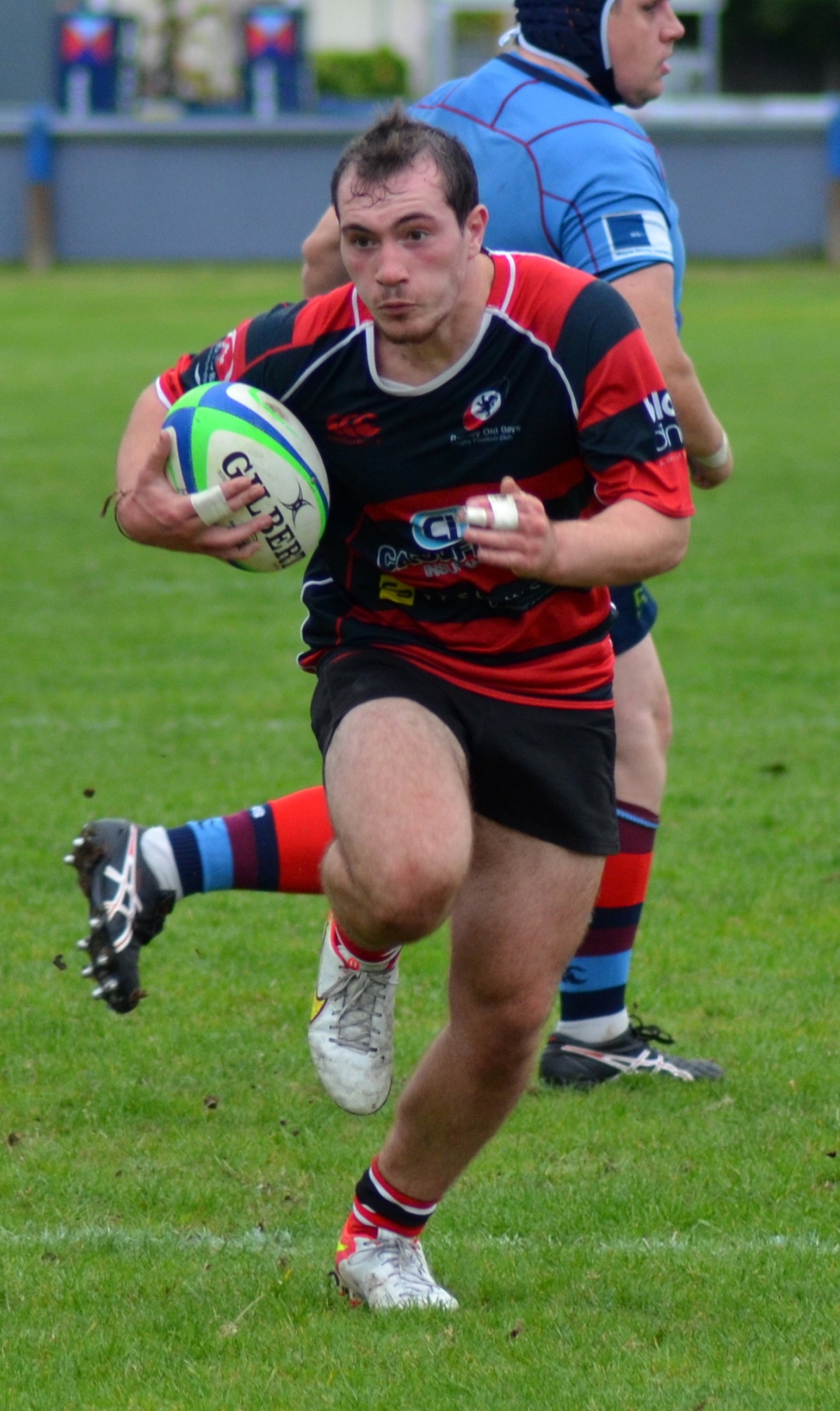 Montgomery drew his man beautifully and released Hall into acres of space, giving him an easy canter to score between the sticks.  Pollock was again on target.

Another Evans break down the right led to Rainey’s final score, when he sent a lovely little grubber into the path of Hall in support.

He made no mistake and was soon diving at the posts for his second try of the day.  Pollock added the conversion to take Rainey’s total to 38.

Quins pressed hard for the last 10 mins, against stout, and, it has to be said, intelligent Rainey defence, but the home side eventually got a consolation try in the final minutes.