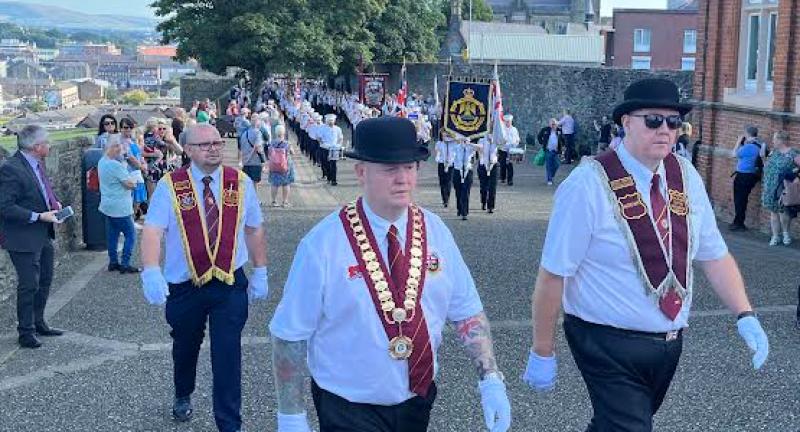 Aontú Councillor for Ballyarnett Emmet Doyle has submitted a motion to Derry City and Strabane District Council to be debated next month on issues relating to parades in the city.

It follows a number of arrests during Saturday's Apprentice Boys Relief of Derry parade in the city during which police seized a number of items relating to loyalist paramilitary groups in the Waterside area of the city.

It also emeged Parachute Regiment flags were for sale at the stall.

Revealing his motion would come before the September meeting of the council, Cllr Doyle said “Following issues raised with me about a minority of participants on the parade on Saturday and sighting of a licensed stall which proceeded to sell items offensive to many in the city, Aontú have decided to act.

“I will ask council to review licences for merchants selling merchandise that could reasonably offend, to contact the Apprentice Boys who applied for permission from the Parades Commission for the annual parade to inform them of the issues raised around public disorder and to ask them to come to council to engage with elected representatives.

“Finally, I’ve asked for officers to contact all relevant public bodies to determine how many complaints have been received about annually recurring parades of any type to start a discussion about how we as a city address these problems.”

“I’m not prepared to kick these discussions down the road as happens every year. I am also keen to point out that this isn’t any attempt by any means to paint one community in a certain light or to stop parades - council doesn’t have that power.

“It is, however, an attempt to have a transparent discussion about what the city expects from parades, their organisers and participants no matter who they are when they take place in the city.”

Cllr Doyle concluded: “I look forward to a robust discussion in September.”